Teleporting people into the Gaohm Zone

Zapping his subordinates for failure.

Complete the Jamahl Hole and use it to destroy the world.

Use Saint Papilia to become immortal.

Interdimensional Warlord
Emperor Gaohm is the mysterious leader of the Jamahl and the primary antagonist of Juukou B-Fighter.

Gaohm has control over a strange dimension called the Gaohm Zone and has the power to teleport people into it, amplifying the strength of any Jamahl warriors that are transported there. Each Zone was a blank place with a few ornaments in the ceiling or walls that reflected the warrior there. Each zone would disappear once the monster was defeated.

His initial appearance is that of a tall figure with a white and purple robe and face that seemed to be full of fibrous. He was seemingly destroyed by the B-Fighters halfway through, only to reappear as a giant floating torso in space called Final Gaohm.

His true goals were not known for the longest time, but it is eventually revealed the purpose of Gaohm's attack was to complete the Jamahl Hole and use it to raze the Earth. This would in turn cause the Earth's legendary "butterfly of life" Saint Papilia to appear to restore life to the planet, enabling Gaohm to capture her and harness her power to make himself immortal.

He was voiced by Takeshi Watabe, who previously voiced Don Horror and God Neros, as well as Emperor Aton and Lagorn in the Super Sentai franchise.

Gaohm at some point formed the Jamahl in the distant past to achieve his dream of becoming immortal and ruling over multiple dimensions. During his conquest, Gaohm went through several commanders of his armies before recruiting his three current ones, Jera, Gigaro and Schwartz.

Eventually, the Jamahl came to Earth after Gaohm took an interest in the planet's guardian, Saint Papilia. For the first part of his invasion, Gaohm sent out waves of Jamahl Fighters to attack the cities of humankind. He soon eyed a particular building that he believed would make an ideal Earth headquarters for them and sent his three generals to lead an army of Jamars to take it. In the process, the Jamahl captured numerous humans to be used as slaves. However, in response to the Jamahl's invasion, three researchers each in a different field of nature were grant the powers of insects to enable them to transform into the B-Fighters and defend the Earth.

As the B-Fighters continued to repel Jamahl's kaijin, Gaohm became increasingly dissatisfied with the performance of his commanders. After the Fusion Monster his army commanders all worked together to create was destroyed, Gaohm gave the three a final chance to prove themselves and sent them all down to Earth to each fight one of the B-Fighters. The B-Fighters fought each of them off, but Gaohm became curious about their power and descended to Earth to fight them personally. Gaohm proved himself to be much stronger than each of the B-Fighters, but allowed them to stab him in order to fully get a taste of what the source of their power was, seemingly killing him.

Immediately after his supposed death however, Gaohm resurfaced as a giant torso floating in space. Having discovered that the source of the B-Fighters' power was none other than the insects he had earlier dismissed, Gaohm sought to create a living weapon to counter them. Gaohm summoned Sorceress Jagul, a legendary Jamahl priestess who had entered slumber 300 years ago, and instructed her to create an evil B-Fighter. After gathering swarms of insects, and using a DNA sample from Takuya, Jagul was able to create an evil clone of the B-Fighters called "Black Beet". Black Beet quickly became Gaohm's favored minion, leading his commanders to become envious of it and further determined to prove themselves. 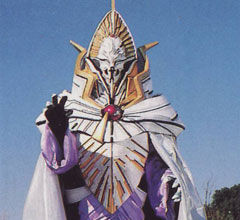 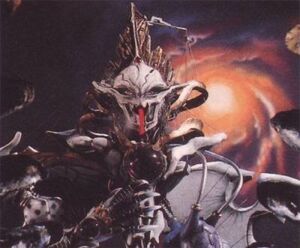 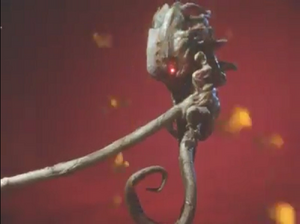