The Emperor
Your Majesty
His Majesty
Majesty

Ruler of the Gestahl Empire

Emperor Gestahl (in Japanese: ガストラ, Gasutora), also called "The Emperor", is the absolute ruler of the Gestahlian Empire and he is the secondary antagonist of Final Fantasy VI.

Gestahl was a citizen of the machine city of Vector, on the southern continent. He studied about the War of the Magi, which had nearly destroyed the world, and about the Espers, magical beings who sealed themselves in another dimension. He grew in power, eventually becoming the Emperor of Vector, but this was not enough for him, as he wished to rule the entire world, so he decided to enter the Esper world and capture them. His army stormed at the place and started capturing the Espers, so the elder of the Espers casted a magic barrier to ward off the humans from that place. Gestahl and his men were forced to retreat, but it also made the Esper Maduin and his girlfriend, who was a human, to be cast out as well. Gestahl examines the girl, and finds that she is carrying a baby, both human and Esper. Amazed, he kidnaps the baby and knocks out the girl. The baby girl was kept captive by him, growing as their guinea pig. Gestahl, with the help of the genius Cid Del Norte, developed the Magitek technology, which infused humans and machines with the magical power of the Espers, allowing him to expand the influence of his empire. The first person to be infused with Magitek power was Kefka Palazzo, but the experiment go wrong, making Kefka insane. Gestahl eventually makes Kefka his court-mage and his right-hand man. Kefka is responsible to carry out Gestahl's orders, usually to force villages to submit to the empire.

When he recieves news that an Esper has been found on the coal mine city of Narshe, he orders Kefka to send 2 soldiers, along with the half-Esper girl, to retrieve the esper. The Esper attack the group, killing the soldiers and making the girl break free from the slave crown that was put on her. The girl remembers her name is Terra, and she eventually join the Returners, a resistance group that fights against the empire. Their numbers grow with time, as they are joined by Edgar, the king of Figaro who was an ally of the Empire, and Celes, who was a former general of the empire infused with Magitek power, as well as Setzer, the owner of the Blackjack, the only airship in the world, among other people. By using the Blackjack, they are able to reach Vector and invade their facility, where they find the espers trapped there. Kefka finds them as they try to flee the place, so both Celes and Cid helps them out. The Returners decide to ask for the Esper's help, so Terra goes to the sealed cave to call the Espers. As she approaches the gate Kefka appears from behind, but he is held back by her friends while she opens the gate. As the gate opens, many Espers fly away and attack Vector, laying waste to the place. When the Returners go to Vector, Gestahl invites them to a meeting, where he pretends to have given up on his plans, saying he wants their help to call a truce with the Espers. He orders his finest soldier, General Leo, along with Celes, to take them to the village of Thamasa, where the espers headed. Terra goes along with Locke, while the others remain at Vector, as they think the emperor is not trustworthy.

Once in Thamasa, Terra and Locke are helped by Strago and Relm, who take them to a cave where the espers had hidden themselves. The espers return with them to Thamasa, as they call a formal truce. However, Kefka arrives at the place, being ordered by Gestahl to kill all Espers and retrieve their magicite. General Leo gets angry and tries to defend the espers by attacking Kefka, but Kefka ends killing him. Suddenly, the sealed gate breaks and the espers run to help, but Kefka overpowers them all. Terra, Locke, Strago and Relm make a funeral for Leo, and soon the other Returners arrive, telling that Gestahl was only using them. As they take off in the Blackjack, they see a large portion of landmass being lifted from the ground into the sky. Gestahl and Kefka had taken the goddess' statues, which regulated magic, and were about to use them to gain unlimited power. Strago explains that if they were to move the statues, the world would be destroyed. They arrive at the floating continent and meet with Gestahl and Kefka. Gestahl uses his new powers to paralyze everyone besides Celes, then tells Celes to join them and rule the world at their side. Kefka gives Celes a sword, and Gestahl orders her to kill her friends. Celes, however, stabs Kefka, who gets mad and starts swearing her, ordering the statues to give him power. As Kefka starts moving the statues, Gestahl tries to stop him, as that would destroy the world they are trying to conquer, but Kefka do not want to listen. Gestahl attacks Kefka with his most powerful spells, but the are all nullfied, so Kefka order the statues to kill Gestahl. He is zapped by the statues, and Kefka simply kicks his body out of the floating continent, although not before Gestahl lamented that, due to Kefka's actions, the entire world will soon learn true fear (in the SNES version, it was that no one will worship him).

Gestahl's ambition is to project power over the world and use technology to make his empire grow unparalleled in its military branch. Gestahl is ruthless and cruel in attaining his goals, shown in his persuasive and forceful taking of espers, and paying no mind to the experiments done to them. He is also shown to be extremely hard-hearted and remorseless, regarding the ethics of infusing children with magic or using a mind-controlling device.

Gestahl is somewhat regardful for human and intelligent life, having his eyes set on his dream Magic Empire. Even after Kefka's atrocities, the Emperor does not punish him outside of throwing him into a prison cell. Gestahl's fake affability and attempt to trick and use the party to his own ends (after lying to them) shows his political knowledge. Gestahl was also very intellectual and aware of what would happen if one were to misalign the statues of the Warring Triad, as he attempts to stop Kefka's disturbance of the Warring Triad as his goal is to lead an empire, and not to destroy the world, although in the SNES version, he laments that no one will worship him. 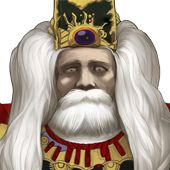 Gestahl
Add a photo to this gallery

Retrieved from "https://villains.fandom.com/wiki/Emperor_Gestahl?oldid=2954237"
Community content is available under CC-BY-SA unless otherwise noted.