The Mummy: Tomb of the Dragon Emperor

Break free from his prison (succeeded)
Become immortal (ultimately succeeded, until he was defeated).

Kill Rick O'Conell, his family and his friends.
Become the most powerful immortal in the world and rule it with an iron fist (all failed).

Qin Han, also known as the Dragon Emperor, Emperor Qin Shi Huang and Emperor Han, is the titular main antagonist of the 2008 film The Mummy: Tomb of the Dragon Emperor. He is a tyrannical and brutal king who first founded the country of China.

He was portrayed by Jet Li, who also played Wah Sing Ku in Lethal Weapon 4 and Gabriel Yulaw in The One.

In ancient China, Qin Han, a brutal and tyrannical warlord, unites the country's kingdoms into an empire and becomes the Dragon Emperor. He had intended to conquer lands in his name, and succeeded in claiming many territories for himself with no opposition; none in China could best him in strategy or strength, as many times during his campaigns, several assassins were sent to kill him in his sleep, but the men were all defeated before they could come close to harming the Emperor. Han went on to vanquish all opponents, destroy many settlements, and slaughter countless innocents, but in time, Han managed to defeat his enemies, as well as to order the construction of a massive wall that served to protect his newly-acquired empire from invaders. He also commanded his enemies and even his servants to be buried within the great wall upon their deaths. The Emperor's mystics taught him supernatural mastery over the classical elements fire, water, earth, wood and metal, making his power seem limitless and ensure his kingdom would continue to prosper under his rule.

After some time in years later, Han's interests turned to preserving his youth as an immortal when he began to grow fearful that all he has accomplished will be lost upon his death, and so sought a witch named Zi Yuan, who was said to know the secrets behind immortality.

Han had sent his general and the sorceress to Turfan to find the formula to become immortal, though Ming Guo and Zi Yuan had, while in Turfan, fallen in love, to the Emperor's displeasure and defied his command that no man touch her. Zi Yuan had returned from Turfan with the Oracle Bones, a book of ancient spells and enchantments that contained the secrets of immortality, and cast the spell to grant the Emperor his desire in Sanskrit, a language that the Emperor did not know: The Emperor pretended to reward Zi Yuan for her work, but, he lied because he knew of her disloyalty because he had been informed of it beforehand by an ally; as punishment, Han ordered Ming Guo to be drawn and quartered by four horses. Han told Zi Yuan that if she agreed to become his queen, Ming would be spared, but Zi Yuan knew that the Emperor would never keep his word: the Emperor indifferently responded that she was right, and had Ming killed regardless. Enraged, Zi Yuan attacked Han who obtained her dagger and stabbed her. As Zi Yuan painfully staggered away, she cursed him for his betrayal of the sorceress. Han was preserved as a terracotta statue along with all his troops and their horses that too transformed into terracotta statues as she escaped, for centuries.

Upon being resurrected, Han attempted to once again conquer, reaching immortality at one point, but was finally destroyed by Rick O'Connell and his family along with the help of Zi Yuan and her daughter Lin who both aided in resurrecting the corpses of all the Emperor's enemies and victims including Lin's birth father, General Ming Guo.

Serves as the main enemy and final boss, he acts in a similar way as in the original story, showing more of his mystical abilities, including its monstrous forms. In the mobile version, he takes up new skills as a defense in his last fight.

Han was a ruthless tyrant who asserted himself into power by leading his troops on a merciless campaign throughout ancient China, killing any resisters along the way. Han could not be defeated by any assassins, regardless of their skills, but knew that, as he aged and his empire grew, he would need to become immortal to savor it always. Han displayed remorseless coldness in his orders and plans, notably at the execution of his former friend and most trusted general, Ming Guo, and the emperor was not known for keeping his word, even when he promised it. A spiteful and vengeful man, the emperor would strike down any that attempted to fight against him with callous prejudice. However, he appeared to have some sense of honor, since he agreed to a fair fight at Rick O'Connell when the later questioned his honor. After his revival, he showed more care for his men, going out of his way to protect those loyal to him.

His personality was based on the real-life first emperor named Qin Shi Huangdi. They were both tyrannical rulers and obsessed with cheating death. As the emperor, Han dressed in body armor typical of his time, and when in his prime, Han had a long ponytail and a clean-shaven face. When he was made the emperor of all China, he had shorter hair, a mustache and small beard. By the time that the emperor was revived from his curse, he was encased in a movable shell-like encasing made of terracotta that could be blasted or broken apart but could regenerate into a molten form and finally back into terracotta. The emperor had reached the waters of Shangri-La and bathed in them, returning him to his physical prime and youthful appearance. 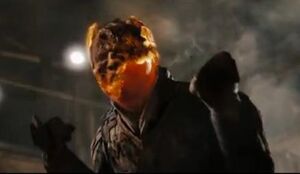 The Dragon Emperor's damaged terracotta shell painfully reforming after he is shot at. 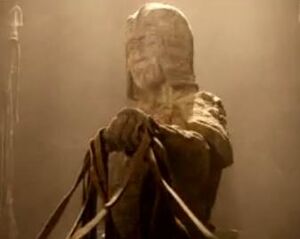 The Dragon Emperor as a terracotta warrior statue. 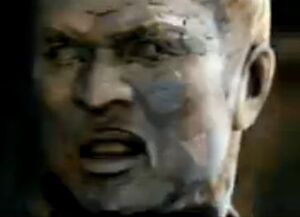 The Dragon Emperor as a living terra-cotta warrior. 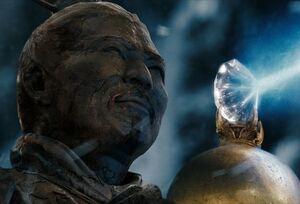 The Dragon Emperor in his three-headed dragon form. 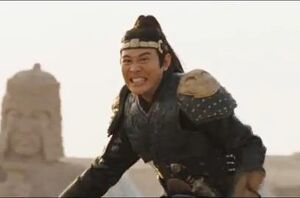 The Dragon Emperor leading his army. 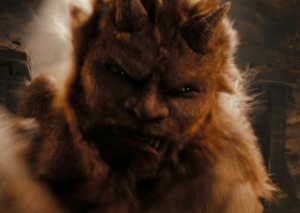 The Dragon Emperor as a Fu dog. 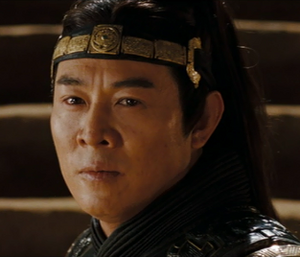 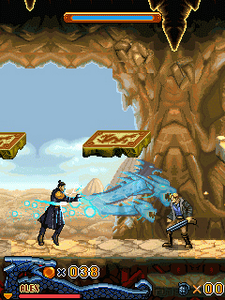 The Emperor Han in the mobile videogame. 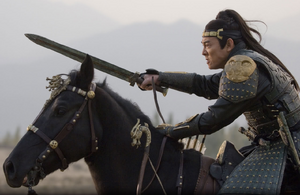 The Dragon Emperor riding his horse.