The Emperor
The Alpha and Omega of the Ing Horde

God-like powers, such as teleportation, shape-shifting, (or advanced evolution) tentacles, dark and light magic, environmental manipulation, can control all the Ing on Dark Aether

Ruling the Ing, being worshiped, absorbing the Light of Aether.

Prevent Samus Aran from taking the Light of Aether (failed).

Lovecraftian Horror
The Emperor Ing is the main antagonist of Metroid Prime 2: Echoes. He is the first of the Ing that was created on Dark Aether when the Phazon meteor crashed into planet Aether and split its dimensions in two.

The Emperor is elevated to such a status that his offspring worship him as a deity, and his lair is elevated in the sky above the Dark Temple Grounds, showing how heavily guarded it is. However, someone travels through, a dark shape can be seen, implying its actually underground, because the dark shape outside resembles the Leviathans seen elsewhere in Metroid Prime.

The Emperor Ing was the first of the dark Ing race to be created on Dark Aether when the meteor ripped open the dimensions. All Phazon on Aether was swept into Dark Aether and the meteor itself entered Dark Aether. The Emperor became similar to Metroid Prime because Metroid Prime originally was just a Metroid brainwashed by Phazon, and Emperor Ing was an ordinary Inglet that was brainwashed into protecting the Leviathan.

During the Luminoth-Ing war, many attempts were made to breach the infamous Sky Temple by finding the Keys, but all Luminoth died in their attempt and the mission was deemed futile.

When searching Sanctuary Fortress, Samus first learns of the Emperor Ing's existence through Luminoth Lore. She finds more about the Sky Temple and how it could be breached.

Role in the game

The Emperor Ing first appears in a similar way to Metroid Prime - he hangs from the ceiling in his palace and it jumps down in a gigantic dark pool to swallow the Light of Aether. Samus had found the Keys and successfully entered the impenetrable Sky Temple, and she feared the worst when massive tentacles came up and swallowed the Light of Aether. She followed the beast to his throne room and a battle began.

In the first phase of the boss battle, the Emperor will try and protect his Eye. It is a gigantic Inglet, and his rotating Eye is protected by two lids, and Samus has to take advantage of the moments when the Eye is exposed. Any Beam will damage the Eye. After enough hits, usually about four charged shots, the Ing Emperor will morph into a cocoon.

In this second phase, the Emperor is inside a black cocoon bursting with Ing Tentacles and swarming with Inglets. As the room quickly fills up with poisonous gas, Samus must turn into her Morph Ball and bomb the tentacle holes. There are about twenty holes and this is the most challenging part of the fight because of the rapidly rising gas and the damage Samus can sustain from Ing attacks and the gas. However, she can use a Power Bomb to damage multiple holes at once. When the tentacle holes are damaged, the Emperor Ing will be reborn.

When the Emperor Ing is reborn, it is now a gigantic Warrior Ing. It leaps about the room and spits out dark or light lasers. These can seriously damage Samus with the dark lasers freezing her, so she has to move very fast to match his speed. The beast will fire beams and the opposite beam will damage him - such as when it fires a dark beam, the Light Beam will damage the Emperor. This fight can be pretty durable, and Samus must conserve ammunition. After about twelve hits, the Emperor will gasp for air and then die. His death, when Samus absorbs the Light of Aether, triggers the end of Dark Aether and Samus must flee to the portal. 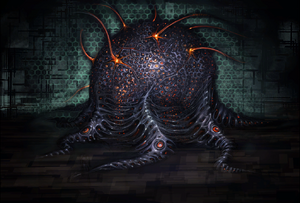 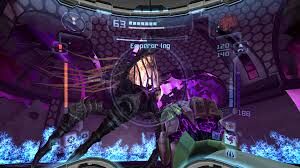