Rule over the heavens and earths as a god.

Emperor Kans is the main antagonist of the 2012 animated Hindi film Krishna Aur Kans. He is the tyrannical and maniacal ruler of Mathura, the cousin of Devaki, and the uncle of the god Krishna.

He was voiced by Om Puri.

Kans was born the son of Emperor Ugrasen and crown prince of the Mathura kingdom. As a result of his poor upbringing, Kans grew up conceited and power-mad, and wreaked havoc across the kingdom, leading his armies in bloody campaigns to increase his power. Kans openly voiced his intentions to spread his influence across the world once he had gained control of the throne.

On the wedding day of Devaki's marriage to Prince Vasudev, a heavenly voice announced that the eighth son of Devaki would kill Kans. Horrified by this prophecy, Kans attempted to kill Devaki, but was stopped by Vasudev. In spite of this, Kans had both Devaki and Vasudev imprisoned, an act that bordered on treason. In response to this, Kans ordered any sympathizers to Devaki and Vasudev imprisoned before seizing power from his father and ordering him locked away as well. Following his ascension to power, Kans was visited by the priest Narad, who advised Kans to seek forgiveness from Lord Vishnu, an act that Kans rejected.

Though Kans initially spared Devaki's first born son, he was convinced by his advisers, Chanur and Mustik, that all of Devaki's children posed a threat to his life, and thus had each of Devaki's children put to death soon after birth. However, Devaki's eighth son, Krishna, was transported to a village to be raised in secrecy. Growing increasingly paranoid, Kans resorted to summoning demons and loosing them on the kingdom to slay his nemesis, with all of these efforts being in vain.

As the years passed and Krishna grew into a young boy, Kans eventually decided to conquer his fears by inviting Krishna to a gladitorial match in his arena. Determined to end Kans' tyranny, Krishna accepted Kans' challenge and arrived in Mathura, joined by his brother Balram. There, they faced Chanur and Mustik in combat. Though the boys initially seemed outmatched, they quickly gained the upper hand against their opponents, and Kans eventually faced off against Krishna himself. Despite his physical strength and demonic powers, however, Kans proved to be no match for Krishna, who slew him in the center of the arena, ending his tyranny over Mathura.

Emperor Kans was a psychopathic, tyrannical, bad-tempered and sadistic man who viewed those around him as lesser beings. He saw it as his right to take whatever he saw fit, regardless of whoever was hurt in the process. Kans was also possessed of a god-complex, aspiring to rule over the heavens in addition to the earth. It is implied that his dark nature was the result of his poor upbringing by his father, Ugrasen, who came to regret his role in shaping Kans into the monster he was in the present.

In spite of his evil, Kans initially had a softer side. He cared for his cousin Devaki, often giving her presents, and congratulating her on her marriage to Vasudev. However, upon learning of the prophecy that Devaki's child would be his undoing, Kans cast away his love for her, nearly killing her on the spot to avert the prophecy, and then callously having her and her husband imprisoned. Even then, he was willing to spare their firstborn son, if only to demonstrate his capacity for mercy, before being convinced by his advisors to go through with executing him and Devaki's following children.

As time grew on, Kans would become immensely paranoid about the prospect of his death. This led to him experiencing hallucinations and nightmares, and would drive him to increasingly desperate means to prevent his death, including summoning demons to terrorize and kill Krishna.

Emperor Kans was a frightening and powerful figure, despite not being an asura or rakshasa he had mastered great magic and also amassed much authority for himself over a life-time of evil deeds - allowing him to try and test the might of the gods themselves, though ultimately he was no match for Krishna. 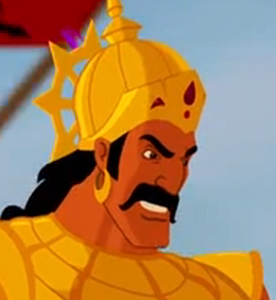 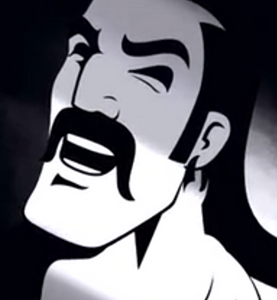 Kans' evil laugh
Add a photo to this gallery
Retrieved from "https://villains.fandom.com/wiki/Emperor_Kans?oldid=4218655"
Community content is available under CC-BY-SA unless otherwise noted.