Emperor Penguin (real name: Ignatius Ogilvy) is a villain in the DC Comics and an enemy towards Batman and the Penguin. Although trusted as the Penguin's right-hand man, he secretly planned to overthrow his criminal organization.

Years ago, Ignatius Ogilvy was the son of a henchman of a gangster in Gotham City. When Ogilvy was young, he witnessed his father getting murdered in front of him shortly after they left the movie theatre. Years later, Ignatius was recruited into the Penguin's crew in his teen years, while Ogilvy was trying to make a name for himself. He quickly rose up through the ranks, from a look-out, all the way up to becoming Penguin's right hand man. 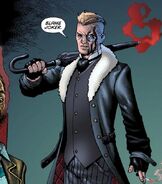 Retrieved from "https://villains.fandom.com/wiki/Emperor_Penguin?oldid=3545367"
Community content is available under CC-BY-SA unless otherwise noted.