Ruler of the Jade Empire

Directing the Lotus Assassins behind the scenes.

He was voiced by Armin Shimerman who also voiced the Keeper from the same game.

Early life and the Long Drought

Sun Hai was born as the eldest son of the Jade Empire's previous ruler and as such, inherited the throne. He had two younger brothers named Sun Li the Glorious Strategist and Sun Kin the Hand of Heaven. Sun Li served as the Imperial Army's commander, while Sun Kin led the monastic Order of the Lotus that directly served and protected the emperor. Hai also had a daughter, Sun Lian the Heavenly Lily, who was born shortly before the end of the Long Drought. Hai's wife died in childbirth.

Thirty years before the start of the game, the Empire was struck by what was afterwards known as the Long Drought. For the following ten years, scorching heat and limited rainfall killed crops, costing thousands of lives. Even opening the royal granaries did no good. Emperor Sun Hai could not accept that his dynasty would end in the face of the natural order, so he demanded his ingenious brother Sun Li to find a way to prevent this.

The Sun brothers directed their gaze towards the Temple of Dirge in the mountainous Land of the Howling Spirits in the west. It was the home of the Spirit Monks, servants and protectors of the Water Dragon, the goddess who oversaw the distribution of water in the mortal realm and guided the spirits of the dead to afterlife and rebirth. Having discovered a way to not only end the Drought but also steal the Water Dragon's divine powers thanks to Sun Li, Emperor Sun Hai set out to conquer Dirge.

The heavenly crime and aftermath

The Imperial Army assaulted Dirge and slaughtered thousands of Spirit Monks through superior numbers. By bribing several Spirit Monks into tainting Dirge's holy waters with human blood, the Sun brothers weakened the Water Dragon, allowing them to enter her temple unopposed. There Emperor Sun Hai struck the Water Dragon through the portal to the spirit world, killing her and stealing her power by seizing her heart. His brothers planned to take the power for themselves and attacked him, only to be overwhelmed by him. Sun Li managed to escape, leaving Sun Kin to be killed by Hai.

While escaping, Sun Li found a baby who'd become the last living Spirit Monk. Realizing that only a Spirit Monk could have a chance to defeat his empowered brother, he took the baby with him to train it as his pawn. Hiding in the village of Two Rivers at the Empire's borders, he shook Emperor Sun Hai off. Hai found Li's discarded armor and decided to taunt his traitorous brother by using his stolen powers to bind Kin's spirit to the armor, creating Death's Hand, the unrelenting and unquestioning enforcer of the Emperor's will. The Lotus Monks were disbanded and reestablished as the Lotus Assassins under Death's Hand. During the following twenty years, the Lotus Assassins were assigned with brutal tasks by the Emperor, including silencing anyone who questioned his will.

Before leaving Dirge, Sun Hai executed Xian Wu and the other Spirit Monks who had been bribed to betray their order and bound their spirits to guard Dirge's fountains. What Sun Hai didn't know was that his acts of deicide and defilement of Dirge provided for an unnatural evil incarnate a chance to take root in the sacred place that exists both in the mortal world and the spirit realm. He left it to savor in the misery he had wrought in Dirge.

Within weeks of Dirge's siege, Hai ordered Sun Li's wife and newborn daughter to be killed by a Lotus Assassin squad. While Li's wife was killed, the baby was saved by one of the Assassins known as Sagacious Zu. The baby went on by the name of Dawn Star and ironically ended up in Two Rivers to be raised alongside the last Spirit Monk by her father Sun Li.

The Emperor had the Water Dragon's body transferred to the burial chambers of the Imperial Palace and cut open to provide water across the Empire. Ignorant of the heavenly crime the Emperor committed, the people hailed him as the hero who ended the Long Drought. Without the Water Dragon and the Spirit Monks to guide the spirits of the dead to rebirth, more and more ghosts appeared gradually across the Empire in two decades, driven mad by their inability to pass on. The Emperor was aware of this, but he didn't care.

Emperor Sun Hai spent two decades draining the Water Dragon's power for himself, but he was forced to do it gradually because of the process' toll on his body. He tried to find the Dragon Amulet, a focus tool of the Spirit Monks which would make the draining of the Water Dragon's power easier and faster. However, the amulet had been shattered, and the Lotus Assassins could find only one of the three pieces. Having become a ghost, the Emperor made less and less appearances in public and had Death's Hand acting on his behalf, purposefully making it appear like the head of the Lotus Assassins was amassing power and influencing the Emperor negatively.

The present and demise

In the beginning of the gameplay, Sun Li the Glorious Strategist is found in Two Rivers by the Lotus Assassins who destroy the village and take him captive. His student, the last Spirit Monk, follows their trail to the capital, the Imperial City. The Emperor's daughter, Princess Sun Lian the Heavenly Lily, agrees to take them to the Imperial Palace where their master is being held in exchange for helping her uncover the Lotus Assassins' shady activities. Much to her shock and disbelief, it turns out that by the Emperor's will, the Lotus Assassins have been taking people across the Empire — with the help of slavers, for example — and used their spirits to create an army of golems as solidification of his rule in the mausoleum built originally for him.

Princess Lian takes the last Spirit Monk to the Imperial Palace to question her father. They confront him in the throne room where he is questioning Sun Li about the whereabouts of the Dragon Amulet, now fully restored and in the possession of the last Spirit Monk. Enraged by the challenge to his authority, Sun Hai reveals his ghostly state and uses his magic to unleashes a shock wave which knocks out everyone else but the Spirit Monk who seems to be resistant to it. After his soldiers and Lotus Assassins fail to kill Sun Li's student, they engage in an extensive duel that ends with Emperor Sun Hai's death. Unfortunately, this allows Sun Li to claim the throne and the Water Dragon's power for himself, just like he planned to all along. Becoming murdered by their own master, the last Spirit Monk is forced to continue fighting Hai's brother to either correct the crimes of the Sun brothers or become the Empire's new tyrannical ruler.

Emperor Sun Hai is a highly proud man who feels himself to be entitled to rule the Jade Empire. He doesn't care about causing the Spirit Monk genocide, the disruption of the natural order, the increasing number of the restless dead, or the current suffering of the common folk. He feels that all of this is justified to keep his rule over the Empire eternal. He doesn't tolerate insubordination and questioning of his authority, even from his own daughter Sun Lian whom he ends up knocking out with a shock wave. He also demands her and others to remember where they stand in the order of things despite his own heavenly crime of killing the Water Dragon and stepping beyond his own mortal station.

Sun Lian remembers that her father used to be warmer in her childhood before becoming cold and distant. He was apparently a more active and responsible ruler before retreating from public. Twenty years of draining the Water Dragon's power have rendered him insane with delusions of godhood. He has allowed the unused parts of the ancient Imperial Palace to decay and uses his own unfinished mausoleum as his secret golem factory, reflecting the extent of his corruption and lack of respect for the past along with the atrocities he allows his Lotus Assassins to commit across the Empire. He underestimates the last Spirit Monk in his arrogance, which leads to his demise.

At the height of his power, Emperor Sun Hai is a formidable opponent thanks to the stolen powers of the Water Dragon. Even when he had just taken her heart, he survived being impaled by the large sword of his brother Sun Kin and was able to use crimson energy beams to throw Sun Li across the temple chamber, telekinetically move Sun Kin, and crack the stone floor. Having learned the Spirit Monks' secret spells which bind spirits, he used them to force the traitorous Spirit Monks to guard Dirge's fountains following their execution and trap Sun Kin's spirit in Sun Li's armor to create the unquestioning minion Death's Hand who rises from every defeat on his master's command.

In combat, Sun Hai uses a staff, the White Demon and Viper martial styles and the Tempest magic style. By switching between these four styles, he can render himself immune to different styles, excluding the transformation styles. 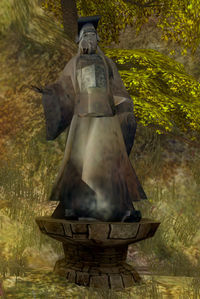 Emperor Sun Hai's statue at the beach of Two Rivers. 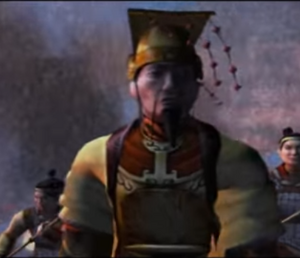 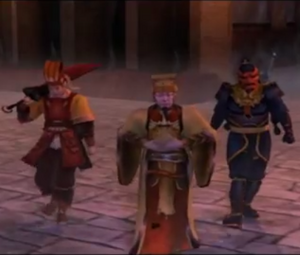 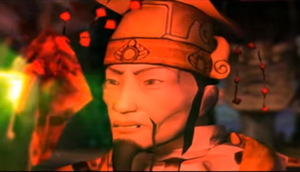 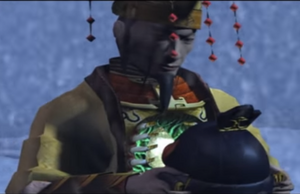 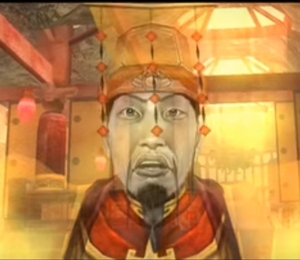 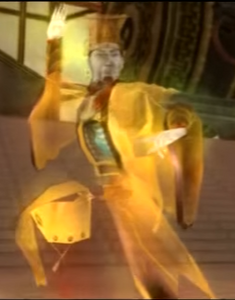 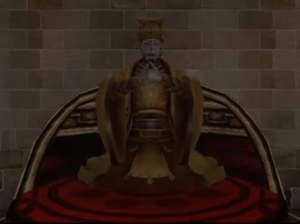 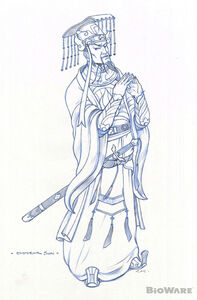 Concept art of Emperor Sun Hai.
Add a photo to this gallery
Retrieved from "https://villains.fandom.com/wiki/Emperor_Sun_Hai?oldid=4367570"
Community content is available under CC-BY-SA unless otherwise noted.