Ruler of the Dogma Kingdom

Kill Super-1 and take over the Earth.

Emperor Terror Macro is the leader of the Dogma Kingdom and the main antagonist of the first half of Kamen Rider Super-1.

He is an ancient man who surrounds himself with bodyguards. The bells that hang down under his throne ring to announce his arrival and also serve as a means of discipline.

He later transforms into Kaiser Crow to fight Super-1 himself.

He was portrayed by Akira Shioji.

Emperor Terror Macro came to Earth with the intention of conquering it. After attacking the NASA base Super-1 was at, Macro attempted to convince Super-1 to join him but Super-1 refused and vowed to fight him.

After General Megirl's failure to destroy Super-1, he prays to the Dogma God for power and is transformed into Kaiser Crow to fight Super-1 personally. He succeeds in killing Benkei, Master Genkai, and all the disciples of the Sekishin Shorinken Fist before fighting Super-1. Though the powers of the Dogma God had made him seemingly invincible, he possesses a weakpoint which is the shoulder his pet crow conceals by perching on. He was destroyed by Super-1 with his Super Rider Moon Surface Kick after his crow betrays him, flying away to expose the blindspot being revealed to have worked for Marshal Demon all along. 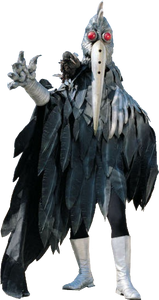 Kaiser Crow
Add a photo to this gallery

Retrieved from "https://villains.fandom.com/wiki/Emperor_Terror_Macro?oldid=3536069"
Community content is available under CC-BY-SA unless otherwise noted.