Going on shopping sprees.
Living the high life.
Enslaving abducted people from their loved ones and from their homeworlds.
Waging war against love.

Emperor Zing is the main antagonist of the American Dad! episode 'Lost in Space". He is the tyrannical ruler of Roger's home planet.

He was voiced by Michael McKean.

Ater capturing Jeff with the intention of making him work in a shwarma stand on his ship, Jeff must prove to Emperor Zing that he was always in love with Hayley and win his freedom at the risk of losing his privates. Zing calls upon The Summoner to bring forth The Majestic to probe Jeff's mind. Taking the test, he finds he hasn't entirely treated Hayley well during his relationship. As Emperor Zing declare that he failed, Jeff protests that he really can love her right but they declare that he still lost. Moping at the slave camp, he is tempted to have one last night of sex before losing his privates but finds himself refusing to cheat on Hayley. Lowering himself into the pit, he faces The Majestic and complains that he only showed the bad memories with Hayley.

The Majestic reveals that his instructions are to only show the bad memories. It tells Jeff that Zing did not use to be a bad guy, but then he got his heart broken. He first tried to cope with this by shopping compulsively (which is why the ship resembles a giant shopping mall). When this did not work, Zing decided that he would wage a war on love itself. They decide to start a revolution among the slaves when Jeff is about to lose his privates and reveals the Emperor’s treachery to all of the slaves. With Sinbad's help, Jeff makes his way to an escape pod as The Majestic reveals the Emperor's own love life that was ruined by Roger when he cheated on him. Zing's subjects realize that he had been lying to them all this time and become very angry at him.

The emperor is last seen being pelted with objects thrown by his audience, and it is unknown what happened to him after that. 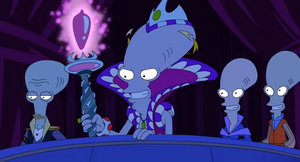 Retrieved from "https://villains.fandom.com/wiki/Emperor_Zing?oldid=3984697"
Community content is available under CC-BY-SA unless otherwise noted.