Testing his weapons on Buzz Lightyear.

To destroy Buzz Lightyear, later to bond with his son. Take over the universe.

Zurg was mentioned in the first Toy Story film and show Toy Story Treats, as part of the backstory to Buzz Lightyear.

Zurg made his first physical appearance in Toy Story 2, as the tertiary antagonist. He was introduced as the main antagonist, but this was the plot to reveal the true main villains later on. He was voiced by the film's co-writer, Andrew Stanton.

He is first seen at the beginning of the movie in the video game Rex is playing. He fights Buzz, but since Rex's arms are small, he cannot execute the combos needed to defeat Zurg and Zurg is victorious.

Later When the real Buzz Lightyear was trying to get out of Al's Toy Barn, he knocked Zurg's selling box over and Zurg broke free. Zurg then followed Buzz to Al's Apartment, where he encounters both Buzzes. Then a fight takes place on top of the elevator. Zurg grabbed Buzz 2 by his neck and told him that he was his father even though Buzz 2 said that Zurg killed his father.

Rex, who was too scared and apprehensive to watch anymore turns away, but his large tail hits Zurg sending him falling down the elevator shaft. However Zurg somehow survived his fall, and he later finds the other Buzz again and spends time with his "son".

His arms were also seen in Woody's nightmare.

The Evil Emperor Zurg is a major boss in the 1999 video game Toy Story 2: Buzz Lightyear to the Rescue.

The Evil Emperor Zurg is the boss of the game's twelfth level, The Evil Emperor Zurg, and the fourth main boss encountered by Buzz Lightyear. Zurg is fought on top of an elevator within the Elevator Hop, and Buzz must be careful not to fall off the edge during the battle. Zurg will constantly hover above Buzz firing spheres at him that will damage him on contact, although Buzz can deflect these by spinning. The yellow spheres travel towards him and then disappear, whereas the green ones will come back at Buzz and home in on him. Buzz must shoot Zurg with his laser while he's in range to damage him, and once his health has been fully diminished, the boss will topple over the side of the elevator and disappear into the darkness below. Buzz will then be allowed to proceed to the following level.

In the series, which is presumably where the Buzz Lightyear character originates in-universe, Zurg rules an empire on Planet Z, and wants to rule the entire galaxy while destroying Star Command. Emperor Zurg considers Buzz his archenemy and often takes any opportunity to eliminate him. Most of his subjects are robots. His feet double as rockets and he can transform his arms into a variety of weapons. Despite often breaking the seriousness of otherwise purely evil statements, Zurg is widely considered the most evil person in the galaxy, especially by the other villains. He seems to have some nervousness about being touched. This cartoon had Zurg is a flamboyant villain who is just as much a comic relief character as he is a formidable opponent, similar to Skeletor, and has many comedic habits such as videotaping Buzz's speeches, maintaining a troll doll collection, and mentioning an equally evil "Nana Zurg". Zurg was voiced by Wayne Knight, who also played Al in Toy Story 2.

The episode "War, and Peace and War" was notably the only episode where Zurg teamed up with Buzz Lightyear to defeat the Heed, a common enemy that was trying to take over their galaxy. In Stranger Invasion, he revealed himself to be Buzz's father (a parody upon The Empire Strikes Back and a nearly identical scene in Toy Story 2), but quickly took it back, using the statement as a 'Made You Look' to stun Buzz and gain the upper hand.

Zurg has a short appearance in Toy Story 3. He was originally going to be the main antagonist during the film's earlier development. Many Toy Story fans though he would be the third's film main antagonist however he was ultimately reduced to a cameo at the end of the third movie.

Zurg is first mentioned in the third movie a few times by Buzz after Lotso switches him to "Demo Mode". He is later mentioned agian when Andy gives Buzz to Bonnie Anderson. Zurg appears during the credits being donated to Sunnyside Daycare Center after Lotso leaves. He is greeted by Stretch. Zurg It is currently stated that this Zurg is a different one from the second movie.

Zurg is in Toy Story 3: The Videogame.

Zurg is also the main antagonist of the Toy Story playset in Disney Infinity. 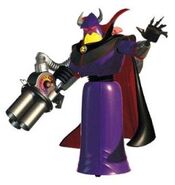 Zurg falls down the elavator

Zurg as he appears in Buzz Lightyear of Star Command

Zurg and the others toys in a movie poster
43 Villains.png
Zurg with the five other main villains of the Toy Story Trilogy
Add a photo to this gallery

Retrieved from "https://villains.fandom.com/wiki/Emperor_Zurg?oldid=1467885"
Community content is available under CC-BY-SA unless otherwise noted.