Galactic Warlord
Leader of the Zyclops

Traveling around the galaxy.

Get the hyperspace fuel so he can finish his mission and fix his mistake by preventing the Star Command exploration ship from landing on T'Kani Prime.

Destroy past Buzz Lightyear and the Galactic Alliance.
Keep traveling through time and alternate the timeline (all failed).

Zurg is the main antagonist of Pixar's 26th full-length animated feature film Lightyear, a Toy Story spin-off prequel film centered on Buzz Lightyear's origin story. He is a galactic warlord who is in search for the hyperspace fuel from his archenemy, Buzz Lightyear.

During the film's climax, he is revealed to be the future self of Buzz Lightyear, who went back in time to finish his mission and be a hero again. He then became in conflict with his past self from the Galactic Alliance, who opposes him and his plans to complete the mission.

He is voiced by James Brolin.

Prior to becoming Zurg, an alternate universe Buzz Lightyear, after completing the hyperspace, landed on T'Kani Prime. However, he was stopped by Commander Burnside's forces, who tried to apprehend him for disobeying orders and stealing a spaceship. As a result, Buzz escaped the planet and travelled centuries into the distant future thanks to the effects of time dilation. There, he landed on a technologically advanced and abandoned vessel, where he put on the purple mecha suit and became Zurg. He would also take control of the Vessel's technology and build the Zyclops.

22 years after landing on T'Kani Prime due to the time dilation, Zurg and his Zyclops robot minions visit the planet. After an encounter with Buzz Lightyear, Zurg captures him, revealing that he is a version of him from an alternate timeline in which he escaped from Commander Burnside after the hyperspace fuel test as T'Kani Prime. Possessing the familiar mecha suit, he went back in time to prevent the Star Command exploration craft from ever landing on T'Kani Prime.

But Buzz even though it would result in a paradox that would wipe out the current timeline, and erase all of Buzz's new friends and his best friend, Alisha's family, knowing that Alisha had a great life and Buzz didn't want to take it away from her and refuse to help Zurg, knowing now that his future self has become ultimately deluded and puts himself before everyone else and doest care about Alisha's future and doesn't even remember Izzy. Buzz takes the fuel to do the right thing but Zurg turns on him, still thoughtlessly believing the plan to bring everyone home is more important than the future of innocent lives.

Izzy, Mo, Darby, and Sox hijack Zurg's ship. Zurg remorselessly kills his version of Sox, Buzz and Zurg into a fight, then Izzy shows up to help, getting over her fear of outer space and then Mo and Darby destroy Zurg's ship, setting off explosives as they all escape. However, Zurg, having survived his ship's destruction, arrives and attacks Buzz, grabbing the hyperspace fuel.

As Zurg prepares to destroy Buzz and his allies once and for all, Buzz jumps out with a jet pack and shoots the fuel, causing it to explode and incapacitate Zurg. With the fuel gone and can't be used to return back his own time, Buzz decides to stay on T'Kani Prime.

However, in the post-credits scene, it is revealed that Zurg survived the explosion, wanting to seek revenge on Buzz now.

Zurg is a giant robot with huge legs for crushing. His design is similar to Zurg's from Toy Story, but more frightening and realistic. His actual form is the elderly version of Buzz.

Zurg is shown to be sophisticated at first when he meets Buzz as he asks him to come with him. However, when one of his Zyclops was briefly defeated and when Buzz refuses to give him the hyperspace fuel, he gets very infuriated and intolerant of his failure.

He has vast intelligence and supreme leadership over the Zyclops. When wearing the Zurg suit, he is indestructible with crushing weight. He also uses a dangerous arm cannon just like his Toy Story counterpart only it shoots real lasers.

Glimpse of Zurg in Lightyear.

Zurg gets outraged to see that one of his Zyclops was defeated by Buzz and his crew. 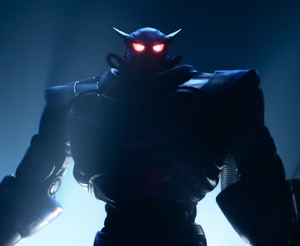 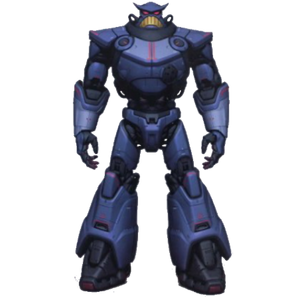 A Full Body Render of Zurg. 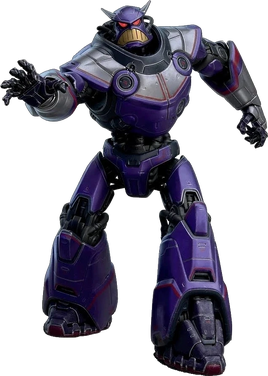