The Emperors of Makai are the main antagonists of the Ghosts 'n Goblins video game series.

The most powerful and leader of the Emperors, Hades is the main antagonist of the Ghosts 'n Goblins series with him being behind the events of the series. Hades appears as the final boss in Ultimate Ghosts 'n Goblins.

Samael is the second most powerful of the emperors and is alternatively known as Sardius. Samael appears as the final boss of Super Ghouls 'n Ghosts.

Lucifer is the third most powerful of the emperors and is alternatively known as Loki or Rushifell. Lucifer appears as the final boss of Ghouls 'n Ghosts.

Nebiroth is the fourth most powerful emperor and he has no physical form, appearing through Astaroth, whom he will sometimes posses. Nebiroth appears as the semi-final boss of Super Ghouls 'n Ghosts.

Azazel is the fifth most emperor in Makaimura for WonderSwan. He is a giant demon monster that Arthur battles on a demon castle's rooftop. 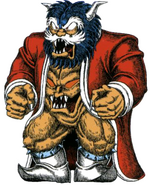 Add a photo to this gallery
Retrieved from "https://villains.fandom.com/wiki/Emperors_of_Makai?oldid=3567754"
Community content is available under CC-BY-SA unless otherwise noted.