Empire of the Rising Sun

Destroy the Allied Nations and the Soviet Union.

Conquer the world.(Both are depends)

Imperialists
The Empire of the Rising Sun is a playable and one of the two main antagonistic factions (along with Soviet Union), in Command & Conquer: Red Alert 3, as well as the protagonists of their own campaign in the game. It is a futuristic version of Japan that combats both the Allied Forces and the Soviet Union.

When the Soviet Union tried to eliminate Einstein, they accidentally created the Empire of the Rising Sun, a imperial organization seeking to rule the world as their divine right. Their weaponry consists of robots, submersible planes, and Tsunami tanks. Emperor Yoshiro spoke of their goals to the world after Allies fend off the Soviets in Europe. The Emperor released floating fortresses to block off the North Sea and the Strait of Gibraltar. He sent another fortress to attack the United States' east coast. The Soviets and the Allied Forces formed a truce to combat the Empire. The Allies defeated the Empire even though the Soviets went back on their truce.

Empire of the Rising Sun Campaign

Emperor Yoshiro summons the player and appoints them a new commander of the Imperial Military and promises them they will be victorious and bring forth a new age. Yoshiro's son, Crown Prince Tatsu then introduces the player to the Empire's chief Logistical Officer, Suki Toyama. The Player then conquers Vortuka Russia.

Yoshiro then orders the city of Odessa to be destroyed. Tatsu wants to local Soviet general Kurkov killed, but Yoshiro wants the general alive so he can serve him. Kurkov however retreats. After Odessa is crushed, Yoshiro sends an ultimatum to the world, they will either bow before him, or be destroyed.

However, Tatsu does not like the idea of allowing the Allies to surrender, preferring to attack. Yoshiro assures Tatsu the allies will surrender after seeing the Empire's victory over the Soviets but Tatsu informs his father that Imperial spy's have found out the Allies are going to attack the Empire's naval base at Pearl Harbor. Yoshiro immediately orders Pearl Harbor to be defended, less the Empire lose half of it's Navy

After the battle, an angry Yoshiro informs Tatsu that the battle at Pearl Harbor was merely a diversion to allow a much larger Allied fleet to move to Tokyo and that the only defense Tokyo has is an Island Fortress. The player is ordered to defend the fortress from the Allied Navy. After the battle, Yoshiro orders the player to attack San Francisco to take out their propaganda so the Empire can use it to bend the Allied people to their will.

After the battle as LA, the Empire's resolve is challenged. Yoshiro and Tatsu, using a robot spy of the US president, discover they are living in an alternate reality created when the Soviets time traveled back in time to kill Albert Einstein. As a result they learn the Empire was never really supposed to exist in the space time continuum. Yoshiro questions the Empire's "divine destiny". To make matters worse, the Allies and Soviets have assembled a joint task force to strike at Japan itself. Yoshiro then humbly admits he should have listened to Tatsu when he suggested they kill every Soviet and Allied soldier and grants him full authority over the Shogunate.

After saving Japan, Tatsu orders the player to invade and destroy Moscow before the Soviets can time travel again. The battle is a complete success and the Soviet Time Machine is destroyed. Yoshiro congratulates his son and the player and orders them both to attack the Allies in Amsterdam in the Netherlands and destroy their FutureTech research center, saying he himself will join. The battle is success, with the Netherlands taken and the Allies tech base destroyed, the Allies and Soviets have been defeated and the Empire can now spread to the whole world. Yoshiro and Tatsu congratulate the player on their victory and appoints them Supreme Shogun. Toyama then contacts the player and asks them to join her on Vacation in Hawaii.

After winning a number of victories against the Soviet Union in Western Europe, the Allies are given an ultimatum from Yoshiro demanding their surrender. Allied leaders gather in Geneva to discuss the threat while the Empire deploys an Island Fortress to blockade Europe. Field Marshal Robert Bingham informs the player that the Soviets are also having problems and that Allied Diplomats are discussing a ceasefire with the Soviets to fight a common enemy. The US President however dislikes the idea of working with Communists. The Player then moves in to engage the Imperials at Gibraltar.

After securing Gibraltar and the naval forces needed to win, Soviet Leader Cherdenko contacts the Allies and secures the cooperation to take out the island fortress. Though the Allies and Soviets are victorious, the alliance is shattered when the President sabotages it.

After defeating the President, the player receives word that all the Imperial Generals will be meeting in Tokyo. Despite no aid from the Soviets, the Allies are victorious and the Empire is defeated, Yoshiro and Tatsu are captured and imprisoned.

After altering time, Premiere Cherdenko returns to the present day to discover that with the majority of Soviet forces engaging the allies in Western Europe, the Empire has invaded Russia and Yoshiro has sent an ultimatum for the Soviet Union's surrender. As the Imperial forces move closer to Leningrad, Cherdenko orders the player to defend it. After saving Leningrad, the player learns the battle was merely a diversion for the Empire's true goal, the Satellite launch facility in Moscow. 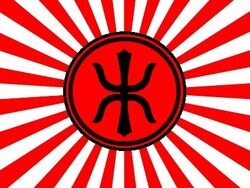 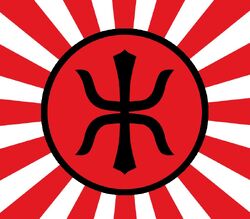 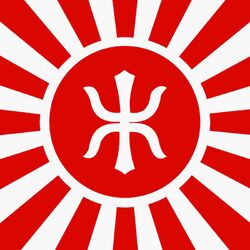 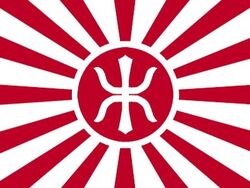 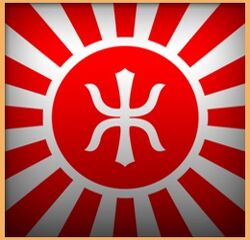 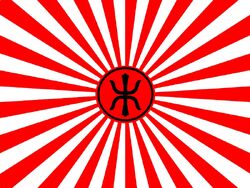 The Empire of the Rising Sun Logo.jpg 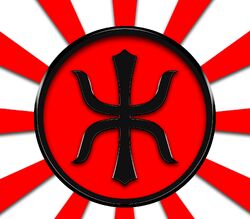 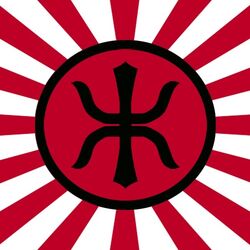 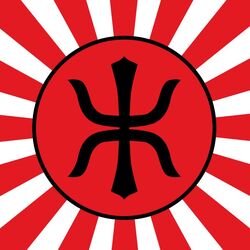 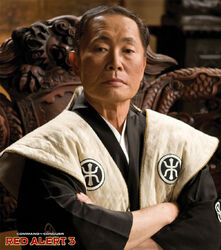 Retrieved from "https://villains.fandom.com/wiki/Empire_of_the_Rising_Sun?oldid=3994276"
Community content is available under CC-BY-SA unless otherwise noted.