Queen of the Seven Seas

Shantae and the Seven Sirens

Destroy Shantae.
Rule over Siren Island and the world with an iron fist (both failed).

The Empress Siren, also called the true Queen of the Seven Seas upon fusing her power with Risky Boots' and the Half Genies' life forces (as well as being poisoned by Rottytops' life force), is the main antagonist and final boss of the 2019 indie game Shantae and the Seven Sirens.

She is the leader of the Seven Sirens and the oppressive ruler of the Sirens who was defeated by the Guardian Genies, who rubbed salt on the wound by stripping her of her powers, leaving her weak. Despite that, however, she managed to regain her lost power by feeding on the aforementioned Half Genies' life force.

According to IMDb, she was voiced by Mela Lee, hence why Lee was mentioned in the game's credits for voice work.

The Empress Siren resembles a humanoid figure with white skin. Her eyes are cyan appear to have no pupils. She also has a mermaid tail that pops out the rear. After she lost her power, her form became more sickly and thin.

The Empress Siren is worse than Captain Risky Boots herself is. She is going at great lengths to get her prizes. Empress Siren decides to blow up the Siren Island after she drained the life force of every living beings of the island.

The Empress Siren first attacked Siren Island before the game's start. She was defeated when the island’s Guardian Genie weakened her by robbing her of her physical form, and she has since laired in the subterranean depths of Siren Island. She eventually received her powers when Risky Boots forced the Half Genies (Vera, Zapple, Plink, Harmony, and Fillin the Blank (though Rottytops foils this by poisoning the Life Force concoction with her own life force and prevents Fillin from being absorbed as she is at it) to Siren Island. The Empress Siren eventually turned on the Pirate Captain before she could get away with her ship, and Risky Boots herself was weakened near death. 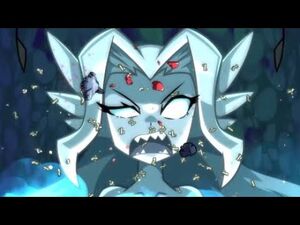