Seducing men.
Controlling others.
Searching for the finest clothing.

The Enchantress, also known as Amora, is a goddess from the Marvel comics who has appeared as a regular antagonistic enemy of Thor, the Norse god of thunder turned superhero. Unlike many deities in fiction, she has no real world counterpart; though she has the qualities of several mythological figures merged into her personality, most notably being Freya.

Amora was born somewhere in Asgard, her parentage is unknown. While still in adolescence, she ran away to the land of the Norns and apprenticed herself to Karnilla, one of the most powerful sorceresses in all the Asgardian dimension.

There she studied all the basic arts of Asgardian magic until Karnilla expelled her for being too undisciplined. She picked up further sorcerous skills from seducing other Asgardian magi and wizards.

Centuries ago, Amora enlisted Brunnhilda, leader of Odin's Valkyries, in her plans of conquest. However, Brunnhilda soon became aware of Amora's immoral ends, and sought to end their partnership. Amora then used her magic to entrap Brunnhilda within a mystical crystal of souls. Only relatively recently was Brunnhilda freed from Amora's spell.

In her first encounter with Thor after he gained his human identity of Don Blake, the Enchantress attempted unsuccessfully to seduce Blake, and then ordered the Executioner to dispose of Jane Foster, the mortal woman whom Thor then loved. Thor saved Foster and defeated both the Enchantress and Executioner.

In the following years the Enchantress has also allied herself with Loki, Baron Zemo, the Mandarin and Arkon in pursuit of her goals of power and vengeance upon her enemies. She was among the many menaces assembled by Doctor Doom to disrupt the wedding of Reed Richards and Susan Storm. Her most frequent adversaries during these years were Thor and the Avengers. She used one of Zemo's machines to transform one of the Baron's mercenaries into the first Power Man.

The Enchantress encountered the mutant Dazzler several times, the first being when Amora sought to take control of a dimensional rift which would have granted her mystical powers that rivaled Odin's. As the rift was forming within a club in New York, the Enchantress auditioned as a performer there, confident that her lovely voice (and physical beauty) would easily win her the part. This would have been the case, if not for Blaire's subsequent audition. The club manager, though obviously smitten with the Asgardian woman, reluctantly admitted that Dazzler's voice was superior.

Enraged at having her plans thwarted (and at the perceived slight of having another woman chosen in her stead), Amora sought to both claim the mystical energies of the rift while also destroying her rival by aging Blaire to death while she was on stage performing. Unfortunately for the Enchantress, many of the city's super-powered heroes, seeing Dazzler as one of their own, were in the audience to support the young woman. They came to her aid, and in the ensuing battle, Amora was forced to use so much magic that the rift was destabilized. With ultimate power now beyond her grasp, the Enchantress chose to flee, rather than fight a pointless battle.

The Enchantress' crimes earned her Odin's wrath, and she suffered exile from Asgard in the past. However, she and the Executioner both came to Asgard's aid in its recent war with Surtur and his legions from Muspelheim. The Enchantress and Executioner joined with the heroes of Asgard, and earned the right to stay in Asgard once again.

Amora also became involved with the guardian of Asgard's Rainbow Bridge, Heimdall. In retaliation for her younger sister Lorelei's rude refusal to join her in battling Surtur, the Enchantress used sorcery to make Lorelei fall in love with Loki. Despite those examples of heroism, the Enchantress basically remains an opportunist seeking her own ends. Finally tiring of the Enchantress's contemptuous treatment of him, the Executioner nobly sacrificed his life on a mission with Thor into Hel, the realm of the goddess Hela. Despite the fact that Amora had always lead the Executioner on, she did genuinely grieve for him. Amora developed a crippling fear of danger as a result of the death of Skurge, and took solace with Thor. The two soon developed a romantic relationship.

Amora was captured by Frost Giants during the chaos of the psychic menace Onslaught. She eventually used her magic to escape and returned to Earth. Discovering Thor was missing (he had presumably sacrificed himself to defeat Onslaught), Amora searched for the Asgardian gods, who had at this time been turned into mortals by Odin's magic. Amora soon helped the gods to reclaim their former glory by defeating the machinations of Set.

Amora returned to Asgard and also restarted her relationship with Thor. During Ragnarok, she was killed during the initial attack by Loki's forces.

Recently, Thor himself returned from beyond death, to once again take up the mantle of Earth's protector, this time as the Lord of Asgard. He restored the city of Asgard (currently located in central Oklahoma), and awakened many Asgardians, who were sleeping within various mortals scattered across the world. It was Thor's intention to awake only those Asgardians whom he deemed noble and trustworthy, while leaving others (such as Hela and Loki) in their mortal state, unaware of their true nature. Apparently he felt that Amora, despite her previous heroic acts (and their romantic liaisons) fell into this 'untrustworthy' category, and he made no particular effort to seek her out. Loki, however, having gained some awareness of his true self despite being locked within the form of a mortal woman, managed to manipulate Thor into waking many, if not all of the remaining Asgardians. Amora was brought forth, and promptly departed for some far corner of the earth.

After Thor returned to life and recreates Asgard on Earth, Loki manipulated him into awaking every Asgardian, including his enemies, among them being Amora. Unlike the rest of her brethren, Amora did not immediately return to Asgard and instead began manipulating reality by attacking the World Tree, Yggdrasil, in order to resurrect Skurge and end her loneliness as she finally realized how much he meant to her. She was ultimately thwarted by Thor, Loki, and Blader, who convinced her that she was hurting the other Nine Worlds with her magic and would only dishonor the death of Skurge by resurrecting and releasing him from Valhalla.

More recently, after the destruction of Asgard by Norman Osborn and his forces, Thor, Steve Rogers and Iron Man were transported through a portal and scattered through the Nine Worlds. The Enchantress appeared in Vanaheim, where she told Thor she would have vengeance upon him.

The Enchantress possesses the conventional attributes of an Asgardian woman ("goddess"), as well as a mastery over certain sorcerous disciplines. Amora is superhumanly strong, possessing physical strength roughly average for an Asgardian woman. At her peak, she is able to lift about 25 tons. Amora can run and move at speeds that are beyond the natural physical limits of the finest human athlete.

Amora's Asgardian musculature is considerably more efficient than that of a human being. Her muscles produce considerably less fatigue toxins during physical activity than human muscles. At her peak, she can exert herself physically for about 24 hours before the build up of fatigue toxins in her blood begins to impair her.

Amora's bodily tissues, like those of all Asgardians, possesses roughly three times the density of human bodily tissues. This contributes somewhat to her superhuman strength, her durability and her weight. Like all Asgardians, Amora's body is much more resistant to conventional physical injury than a human being. She can withstand great impacts, exposure to temperature extremes, and powerful energy blasts that would severely injure or kill a human being with no injury to herself.

It is possible for Amora to sustain injury, despite her body's resistance. In such an event, Amora's superior metabolism enables her to heal injuries much faster and more extensively than a normal human would be capable of. However, she is unable to regenerate missing limbs or organs without the aid of powerful magical assistance. Unlike some other god pantheons, such as the Olympians, the Asgardians do age, though it is at a pace vastly slower than a human. Although she is several millenia old in age, Amora has the appearance and vitality of an Asgardian woman in her prime. She is, however, immune to all known Earthly diseases and infections.

Sorcery: The Enchantress' magical powers are among the most powerful of all Asgardians. The Enchantress’s strength and proficiency with magic is less great than that of Karnilla, Midgard's former Sorcerer Supreme Doctor Strange, or even the part-Faltinian Clea, Mistress of the Mystic Arts of the Dark Dimension (with the Flames of Regency), yet her skill is still high enough to rank her as among the top twenty magic practitioners in all of Asgard, with enough power even in the Earthly realm to cloud the sight of Agamotto through his Orb for hours from the view of Doctor Strange.

The Enchantress' powers derive from two main sources: her innate capacity to manipulate ambient Asgardian magical energy (of power-objects and entities found therein or merely Asgard's natural magic) honed through practice, and her acquired knowledge of spells and enchantments of Asgardian origin. She can use her sorcery to generate powerful blasts of concussive force, heat, or light. She can also alter her appearance, taking the shape of other humanoid beings or teleport herself and others across great distances.

The main focus of the Enchantress' powers has been the enhancement of her natural beauty and allure so that men, mortal or otherwise, are overwhelmed with desire for her. She has enchanted her lips so that a single kiss is sufficient to make virtually any man a slave to her will, obedient to her every command, for about a week. Subsequent kisses enable her to enthrall someone's will indefinitely. Her knowledge of arcane lore enables her to cast spells with a variety of specific effects. Among the many spells she has employed include illusion-casting, temporary paralysis, deflection of matter and energy, inter-dimensional travel, and elemental conversion.

Once, at the maximum peak of her magic, Amora’s transmutation enchantment upon the Black Knight changed him into a statue, which Midgard’s Sorcerer Supreme Doctor Strange could not break for an extended period of time even with his full powers and the access to all his occult resources at the Sanctum Sanctorum, causing the Avengers/Defenders War and the quest for the Evil Eye. Amora has amassed considerable knowledge of mystical lore, and is an expert in the art of seduction, both natural and supernatural.

In the past the Enchantress has made use of advanced scientific equipment created by her allies (when granting Erik Josten's ionic powers, for example, she employed the same devices that Baron Zemo had used to give Simon Williams his abilities, years earlier). She is by no means an inventor or technology expert, but she is quite intelligent, and able to operate such technology in a basic and effective fashion.

On occasion, the Enchantress employs various mystical artifacts, potions, and power objects. She has, for instance, kept the soul of Brunnhilda the Valkyrie entrapped in a crystalline gem, using her own magics to assume the Valkyrie's form.

Amora's spells derive their potency from Asgardian sources (such as power objects or entities), and thus are most potent when used in the dimension of Asgard itself. A prolonged absence from Asgard tends to diminish her powers altogether, though they never fade completely. Although she has a superhuman physique, Amora has little to no experience in hand-to-hand combat, typically relying on minions to fight for her. 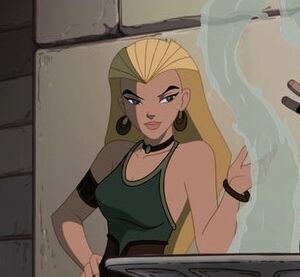 Amora in Thor: Tales of Asgard 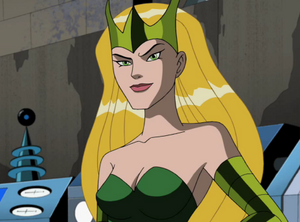 The Enchantress in The Avengers: Earth's Mightiest Heroes 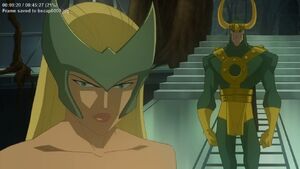 The Enchantress in Hulk Vs 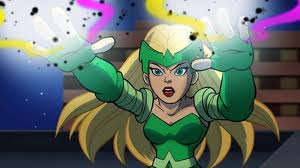 The Enchantress in The Super Hero Squad 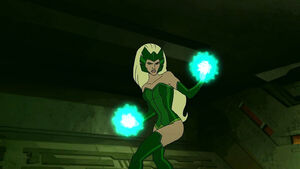 The Enchantress in Avengers Assemble. 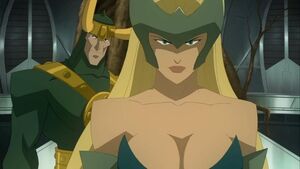 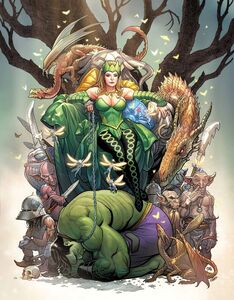 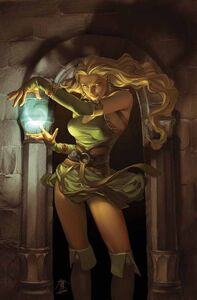 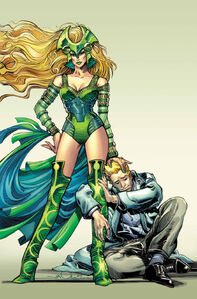 Retrieved from "https://villains.fandom.com/wiki/Enchantress_(Marvel)?oldid=3450549"
Community content is available under CC-BY-SA unless otherwise noted.