Most sophisticated structures and hierarchy similar to that of state
Possesses facilities, bases and actual military
Possesses authority to initiate experiments and projects
Possesses doctors and scientists
Great influence

Purge and eliminate all mutants.

The Enclave are a major faction in the Fallout series. They are the post-war remnants of the original United States government, serving as the main antagonistic faction in Fallout 2 and Fallout 3. Several veterans appear as supporting characters in Fallout: New Vegas and a defunct Enclave branch is present in Fallout 76.

They originated mainly from pre-war "shadow government" agents and other corrupt politicians, and consider themselves to be a legitimate continuation of the true U.S. Government. Their ultimate goal is to rebuild the American civilization in its original, pure form by eliminating all the "mutants" who are no longer fully human due to all the radiation. What the Enclave does not seem to fully grasp, however, is that there designation of "mutants" applies to pretty much everyone except themselves and the surviving communities that are still locked away in Vaults, and their goal would essentially entail genocide.

The Enclave were also secretly involved in the "Vault" program of nuclear shelters, which is one of the central elements of the Fallout universe. These vaults were ostensibly intended to protect those wealthy enough to afford a spot in one from the nuclear holocaust, but they were also used for a "social experiment" by the Enclave, where most of the vaults secretly had some unusual and often downright harmful "gimmick" intended to test how people would behave in such situations. For instance, Vault 11 supposedly required the inhabitants to sacrifice one of their own each year for the community to survive, Vault 106 was laced with mind-altering drugs that turned the people inside crazy, and Vault 112 was a virtual reality program where the Overseer controlling the simulation went insane and started torturing the other people for fun.

The Enclave are the main antagonists of Fallout 2. They had captured the residents of Vault 13 and the protagonist's home village, Arroyo. The player's goal is to infiltrate the Enclave's oil rig base and not only rescue the residents Vault 13 and Arroyo, but to stop them from unleashing a modified FEV that could've wiped out everyone but the Enclave.

The Enclave's roles and goals are similar to that of Fallout 2. However, they were trying to access the water purifier and insert their FEV strain. The protagonist, the Lone Wanderer, could of course stop the Enclave, but the player could've also chosen to indirectly assist the Enclave with their plans.

In Fallout: New Vegas, the Enclave's presence has greatly faded, except for an Eyebot companion named ED-E, an Enclave military brat-turned Followers researcher named Arcade Gannon (who too serves as a companion), and five elderly retired veterans of an Enclave platoon known as the Devil's Brigade. All of the Devil's Brigade members have moved on from their past with the Enclave save for Orion Moreno, who resents the NCR for what happened at Navarro. The remnants can be recruited by the Courier and Arcade Gannon to fight at the endgame battle at Hoover Dam, either assisting the New California Republic or Caesar's Legion.

The Enclave return in this game, but under the leadership of the A.I. MODUS, located in the Whitespring Bunker in Appalachia of West Virginia. With President Eckhart and the survivors of the United States government and military dead when MODUS was damaged and retaliated against them, MODUS was now in charge of providing the automated promotion system to allow enlisted U.S. military personnel to advance to the rank of General to be granted access to the Appalachian Automated Launch System, using the Kovac-Muldoon orbital platform to pinpoint the location of the SAC cargobots carrying the nuclear keycards and the mutated U.S. military officers who carried the pieces of the nuclear launch codes for the three still-active nuclear I.C.B.M. silos in Appalachia: Site Alpha, Site Bravo, and Site Charlie. MODUS is first met once the residents of Vault 76 use the late Senator Blackwell's access pass to the Whitespring Bunker, found in his Free States bunker, to gain access to the bunker where MODUS is situated. Once formal introductions are done, MODUS has the residents aid him in reestablishing contact with the Kovac-Muldoon. Once done, he then grants them access to most of the Whitespring Bunker's various facilities and speak with the various Protectrons, Mister Gutsy, and Assaultron robots that maintain the bunker. He only grants them access to the most restricted parts of the bunker reserved for the Joint Chiefs and President once they have attained the rank of General, using the Kovac to locate the nuclear keycard and launch codes necessary to fire an I.C.B.M. from the three silos to take out the Scorchbeast Queen at Fissure Site Prime in the Cranberry Bog. Other than offering his services and those of the Whitespring Bunker to help the residents, MODUS does not appear to be a villain in any way, though the eerie smile his avatar displays sometimes can make it look like he is using the residents for his own personal gain.

The Enclave were also responsible for the release of the Scorchbeasts unto Appalachia as they were man-made, and President Eckhart wanted to use them to lower the DEFCON level to 1, thus allowing MODUS to grant him access to the Appalachian Automated Launch System so he could use the nukes to permanently finish off what was left of the People's Republic of China that survived the Great War, wanting to wipe out Communism for good, though there were those who were against it, leading to the Enclave becoming splintered between two factions, and leading to MODUS being damaged and thus causing his retaliation that wiped out everyone in the Whitespring Bunker as a result. 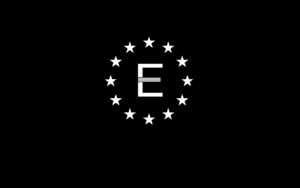 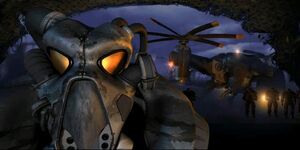 A team of Enclave soldiers in Fallout 2 intro cutscene. 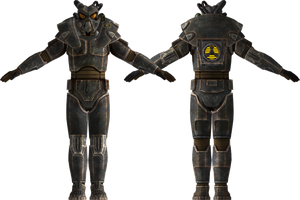 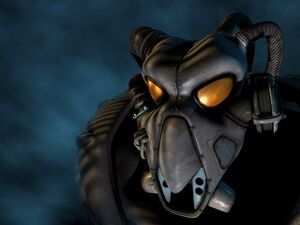 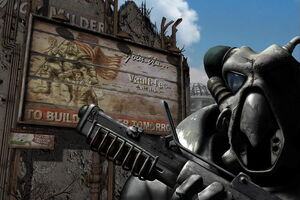 To build a better tomorrow.