Get into other dimensions to devour negative emotions.

Ende the Devourer is the main antagonist and the final boss of Super Robot Wars X​​​​​​.

Ende is a gray draconic being with black armor, he also has a yellow crown-like structure on his head. Ende is also connected to a giant white beast and a giant tree.

Ende the Devourer is unbelievably arrogant, seeing other creatures as his food resources. Ende also like to feed on negative emotions, which he doesn't need to and he did this out of sheer enjoyment. Positive emotions, on the other hand, is hated by Ende.

Ende the Devourer created Al-Warth by recognizing it did, which is a dimension in order to feed on the negative emotions. In order to achieve this, he had the Keepers of Order, a cult that worship him to stir up conflict, thus the inhabitants of Al-Warth will have negative emotions. However, after many years, Ende is bored with the emotions of the inhabitants of Al-Warth, so he summoned people from other dimensions to Al-Warth to feed on their emotions, two of these people are Iori Aoi and Amari Amano, the main protagonist of the game.  Some of these people from other dimensions got their emotions completely sucked up by Ende and is reduced into a soulless husk. At some point, Ende has done a truce with Anti-Spiral for self-protection. Ende also co-oped with Black Noir to have him be the administer for other worlds  so that Ende can feed on emotions from other worlds as well. This eventually last for 3000 years.

Near the end of the game, Ende started to have the Keepers of Order to attack cities directly to feed on their negative emotions. Thus starting to foreshadow the true nature of the cult and Ende. Eventually, Anti-Spiral is destroyed by X-Cross. When X-Cross is returning to Al-Warth, Ende sent some members of the Keepers of Order to fight X-Cross, but they are all defeated, so Ende finally revealed himself and his true intention to the heroes. Ende also started to lost interest in Al-Warth, thus causing the world to start to crumble and said that he would want to travel to other worlds to cause more chaos . In order to show X-Cross how powerful he is, Ende also devoured a planet in Al-Warth in front of them. However, Ende soon spit it out after being disgusted by the positive emotions, thus starting the final battle. In order to confront X-Cross, Ende summoned several clones of Celric Obsidian to fight the heroes. However, in the end, Ende is still defeated. In his last moment, Ende warns X-Cross that without him, Al-Warth will be completely destroyed. Than, Ende finally died once and for all, which cause Al-Warth to crumble even more, luckily, Spero sacrificed himself to become Al-Warth's new divine beast, thus saving Al-Warth.

In the If-Route, when the main protagonist tried to sacrifice himse/herself to stop Ende, Spero will stay in Ende's body after Ende spit the main protagonist out. Who than take over the evil beast's body and completely destroyed Ende's conscious, much to the divine beast's horror.

In the expansion pack of Super Robot Wars T, Ende is revived by Atrium. When the divine beast come back to live, he decided to "teach" Nevanlinna about hatred, the final boss of Super Robot Wars V, to corrupt her. Thus the duo return for their revenge. After a brief battle, Ende and Nevanlinna fused together to become Nevanende, the true final boss of the game, nevertheless, they are still destroyed for good after a tough battle. 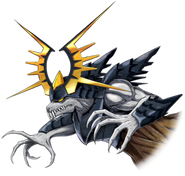 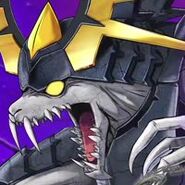 Ende's demise.
Add a photo to this gallery
Retrieved from "https://villains.fandom.com/wiki/Ende_the_Devourer?oldid=3846662"
Community content is available under CC-BY-SA unless otherwise noted.