Collecting emotions in order for Deboth to gain power.

Resentful Knight Endolf is a new knight created by Hundred-Faced High Priest Chaos for the Deboth Army in order to further along the evolution of Deboth. He is the central antagonist in ZyuDen Sentai Kyoryuger.

He is voiced by Masaya Matsukaze, who portrayed Shun Namiki (MegaBlue) in Denji Sentai Megaranger.

Resentful Knight Endolf was created by Hundred-Faced High Priest Chaos got an idea from Luckyuro's recent plan which was carried out over the assumption that the Deboth were defeated. The monster Debo Akumoon had trapped humans in their dreams to go through nightmares where in it people they knew very well would resent them. Therefore Chaos knew this was the way to combat the Kyoryuger's Brave.

Endolf made his first appearance when mist in the Frozen Castle appeared and he was shown in front of the Emotion totems. From that point Dogold grew to loathe Endolf and when he first encountered the Kyoryugers he beat them to the ground and the latter couldn't dent him. Although he had to escape due to Dogold fighting him in this new rivalry. The first plan was to take Ian Yorland's resentment of Aigaron for killing his friend Shiro and Endolf even reflected on how he can't collect Deboth emotions. So Aigaron and Endolf attacked Ian and the former of the knights provoked Kyoryu Black. Although Ian wouldn't fully give in and Aigaron showed a psychotic breakdown from when Chaos revived him to which Endolf gladly accepted.

The next plan came as an opportunity when Kyoryu Red or known as "King" had gone berserk. By killing him this could invoke resentment in the Kyoryugers and to do this he created two Debo monsters, Debo Shinobinba and Debo Karyudosu. The former Debo monsters sealed their henshin devices that rendered them fighting essentially useless. The latter had a motorcycle that he confronted the heroes with. While this should have worked the Kyoryugers distracted his forces enough so their mentor Torin could free the Kyoryuger leader. At the end Debo Shiniobinba was finished off.

The last plan before his imprisonment was to corrupt Torin and make him their puppet. To do this he broke into a studio where Candelária

Endolf is armed with the MunekagaMirror, the TekagaMirror, and the candlestick-like RosoCrusher gun that doubles as the hilt of his sword.

Endolf also has the tendency of going overboard in a fight, no matter if his comrades end up in the way.

After Christmas, Endolf received a green gem on his left forearm that allows him to harm Dogold via activating the "shock collars" around the Raging Knight's horns; however Dogold destroys the gem before Endolf's demise. 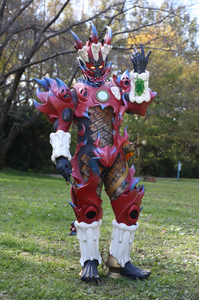