Terminate humanity and create an utopia of non-human species.

The Offscourings, also called the "Ends", are the main antagonists of the manga and anime series Drifters.

Like Drifters, Ends tend to be important figures from various periods of the Earth's timeline, and have been taken to the world where the plot of Drifters takes place by Easy. Unlike Drifters however, the trauma from the events of their history has twisted them, turning the Ends into hateful and destructive entities whose very humanity is questionable. One who stands out the most among the Ends is the leader named Black King, whose true identity is a complete mystery. (Heavily hinted that he might be either Jesus Christ or Shiro Amakusa) They are now a group of Historical figures who are now tragic villains.

Ends also differ from Drifters in that they have supernatural abilities. These abilities largely appear to be related to how they died or the events leading up to their demise. Joan of Arc's pyrokinesis and Rasputin's ability to control others are rather straightforward examples.

It is indicated that Drifters and Ends had been fighting and killing each other for unknown period of time. Olmin stated, "Ends this time are far more destructive." To Olmin however, Drifters who are to fight Ends are little better than Ends in terms of insanities and zaniness. However, to combat such a destructive force Olmin and her superior Abe no Seimei view that such craziness from Drifters are necessary evil to combat Ends.

Led by Black King, Ends commands an army of non-humans out to create the world free of humanity, with Drifters stands in their way. The Ends abilities come from on how they died or the events that led up to their deaths.Joan fire powers and Rasputin's ability to control are more straightforward examples. 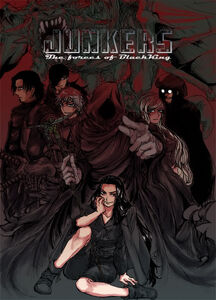 Add a photo to this gallery
Retrieved from "https://villains.fandom.com/wiki/Ends?oldid=3433490"
Community content is available under CC-BY-SA unless otherwise noted.