Gene, or better known as the Engineer, is one of the secondary antagonists of the Plants vs. Zombies franchise. He is an undead engineer who takes part in fighting plants.

The Engineer appeared in the Garden Warfare series as a playable character on the Zombies' side. His primary weapon is the Concrete Launcher.

In Battle for Neighborville, he is a playable character of the Support class. Additionally, all of his old abilities were replaced with the new ones.

Engineer returned in this game as a Mustache Science Zombie card of Brainy class. He costs 2, with his rarity is Premium - Uncommon. Zombot Drone Engineer's traits are Gravestone (he hides in a gravestone until it's time for tricks), and his strengths and healths are 1/4. When either he or another science zombie deals damages, that zombie's strength gets increased by 1.

Engineer returned in Plants vs. Zombies 3 with the name Jackhammer Zombie, and he is one of the Bank Zombies. He rides on his Jackhammer and jumps over the first plant he meets, similar to the Pole Vaulter Zombie from the first game.

Another zombie in this game takes the Engineer's name from Plants vs. Zombies Heroes is the Zombot Drone Enginner, a female version of him that summons Zombot Drones to assist her fighting the plants.

With his Welding Blaster, the Welder, a Rare (Super Rare in Garden Warfare 2), is ready to perform fire splash damages at his enemies.

Painter is a Rare Engineer variant who masters his precision with his long-range Paint Crossbow.

Al, or better known as the Mechanic (the Rare variant of the Engineer), utilizes direct damages with his rapid-fire Air Gun (or Air Impactor).

The Electrician is a Super Rare Engineer variant whose Volt-O-Blaster performs conductive splash damages to his enemies.

The electrician is a Mustache Science Zombie card of Brainy class. He costs 3, with his rarity is Premium - Super Rare. Electrician's trait is Gravestone (he hides in a gravestone until it's time for tricks). Both of his strength and health are 2. When being revealed, either him or another zombie does a bonus attack

Bob, or better known as the Plumber , is a Super Rare (Rare in Garden Warfare 2) Engineer variant who uses his Plunge Shot to provide extra splash damage to his enemies.

Bungee Plumber is a Professional Mustache trick card of Crazy Class, which is based on the Plumber, one of the Engineer's variant. The card costs 1, and its rarity is Basic - Common. When played, the Plumber drops down and deal with 2 damages to either a plant or the Plant Hero.

With the use of his fast-firing Weed Buster, the Landscaper, a Rare Engineer variant, is ready to take some plants down.

The Landscaper is a Professional Mustache Zombie card of Heart Class, which is based on the Engineer's variant with the same name. He costs 3, and his rarity is Premium - Super Rare. Landscaper's trait is Gravestone (he hides in a gravestone until it's time for tricks). Both of his strength and health are 2. When revealed, he reduces a plant's strength and health by 2.

The Sanitation Expert is a Rare Engineer variant whose Toxic Trash spread toxic damages to his enemies.

Roadie Z is a Super Rare variant of the Engineer in Garden Warfare 2. His Ear-Radicator is an overheating soundwave blaster that perform damages at close range. Unlike all other Engineer variants, he has 150 Health instead of 125.

Although AC Perry - a Rare Engineer variant in Garden Warfare 2 - does not know how to fix air conditioners, he knows how to chill and freeze his enemies with his rapid-fire Frosty Fan.

The Zombot Drone is one of the abilities for the Engineer. It is a drone that flies and attacks plants with the Zombot Laser.

A variant of it is the Rocket Drone, a drone with higher health and higer speed, its main weapon is the Mean Beam, a laser beam that deals continous damage. It can drop a cone that deals 25 up to damage in a small radius.

Engineer appeared in the Garden Warfare comics as one of the supporting antagonists who take parts in fighting plants. 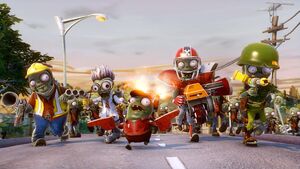 Engineer with the rest of the zombies. 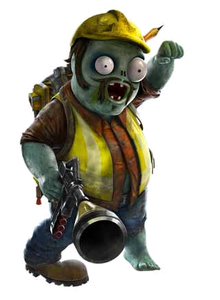 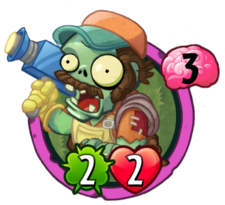 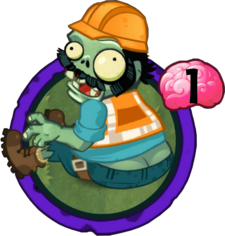 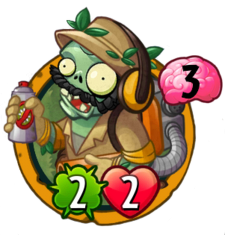 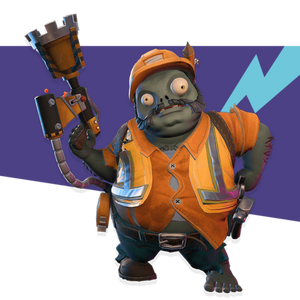