Hunting people with special abilities and steal them.

Stealing her opponents' abilities by Kissing them

Steal as many powers and abilities from her opponents as possible and conquer humanity.

Power Hungry Villainess
Enigma is the main antagonist of an anime, Myriad Colors Phantom World. She is a phantom that was created by humans and she is more dangerous than normal phantoms. She has the ability to steal special abilities from humans by kissing.

Enigma is a phantom that appears to be a young woman somewhere in her mid-twenties. She wears an outfit that appears to be from the wild west, wearing dark clothing and a cowboy hat. She even has long, black hair and pointy ears, along with her voluptuous figure and big bosoms.

Enigma enjoys chaos and destruction, along with demonating humanity by making a lot of people suffer, including civilians. She's also very smart and cunning when dealing with her opponents, allowing them to make their own moves first as a strategy in order to steal their powers and abilities. She even imitate, like she did to Haruhiko's mother, people's personalities when she transfer her body to someone else's, so she could fool her opponents.

Enigma has the ability to steal power and or the ability of her victims though lip contact (kissing). When absorbing their powers her opponent gets knocked out, after which she can use said power and or ability . She is also known to be intelligent and cunning and will prefer to let her opponent make the first move to which she will dodge and counter. She even has the ability to transmit herself to anyone's body as a disguise as she did to Haruhiko's mother while also mimicking her personality. Thus she was able to kiss Haruhiko and steal away his ability(ies).  She also seems to be able to augment the body and or limbs of her host if she needs to intimidate her opponents or when threatened.

Victims that had their powers and abilities stolen from Enigma: 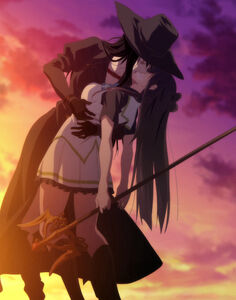 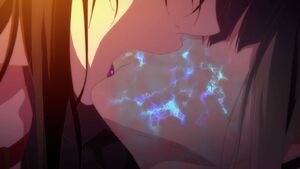 Enigma's process of stealing her opponent's abilities and powers up close. 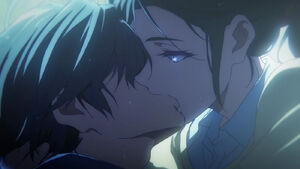 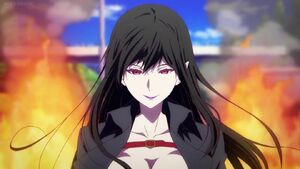 Enigma's appearance without her hat. 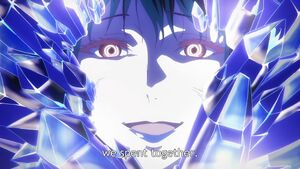 Enigma's last moment before getting sealed/killed by Haruhiko's team.
Add a photo to this gallery
Retrieved from "https://villains.fandom.com/wiki/Enigma_(Myriad_Colors_Phantom_World)?oldid=3256232"
Community content is available under CC-BY-SA unless otherwise noted.