Enker is a Robot Master with a cold and gloomy personality. His only goal is to kill Mega Man. Despite this, he has keen interests such as Japanese culture and eating Udon Noodles. He's shown to be a xenophobe, disliking foreigners to Japan.

In Mega Man: Dr. Wily's Revenge, Enker was sent by Dr. Wily to kill Mega Man. He fought Mega Man after he defeated all the Robot Masters in the rematches. In battle, Enker uses the Mirror Buster to absorb Mega Man's attacks to later fire a beam. The more attacks he receives, the beam will be more powerful while still damaging himself. Enker will then run across the field by either running or jumping. After Enker is defeated, Mega Man obtains the Mirror Buster.

Enker fought Mega Man alongside the other Mega Man Killers (and Quint) in Mega Man V in the Wily Star. His weakness is the Super Arm.

Enker appears as a postgame boss in Mega Man 10 along with the rest of the Mega Man Killers, his moves are the same, but he can move faster. His weakness is the Ballade Cracker. Mega Man obtain the Mirror Buster after defeating him.

Enker appears as one of the playable units in Mega Man's Soccer. 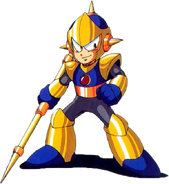