Sending people to hell to prevent her parents from suffering in hell (until season 2).

Keep other girls from suffering the same way she did.

Sending countless people to hell (including innocent ones)

Burning and slaughtering her entire village

Enma Ai is the main protagonist, on & off anti-heroic and main antagonist of the horror anime Jigoku Shoujo/Hell Girl. The Master of Hell forced her to serve him as the Hell Girl for all eternity or else he'll send her innocent parents to hell.

Enma Ai was born in the late Sengoku period and the beginning of the 17th century of Japan. As a kid she was bullied in her village since she apparently brought butterflies back to life. She was chosen to be a sacrifice in order to please the mountain gods. But her only friend Sentarou saved and hid her, supplying her with food for over a year. The village's harvest was very bad. Eventually they discovered her in the mountains and blamed all the famine on her. They buried Ai and her parents alive. While this happened, she cursed everyone.

After death, Ai then returned as a vengeful spirit and slaughtered everyone in the village and burning it. She was then approached by the Spider, who told her that she will have to serve him. Else her parents will also have to wander in agony forever. Ai is forced to accept and becomes Hell Girl. During her life, she makes many contracts with tormented people and subsequently sends the tormenters to hell. She also picks up three other spirits and recruits them along her way. They are Ichimoku Ren, Hone Onna and Wanyuudou.

Ai has a long straight black hair in a hime cut that she frequently keeps untied. Her skin is frequently pale & she possessed red eyes, which were originally brown before she was buried alive. Ai also has light pink lips. She maintains the appearance of a 13 year old girl, and has remained as such for over 400 years.

Her usual attire consist of a dominantly black seifuku, similar to a Japanese school girl uniform, with some parts colored red and white. However, when performing an act of sending someone to hell, Ai wears a black kimono, with either temari (hand-woven balls) or floral design. Both patterns alternate throughout the series.

Ai wears a mask of cold personality as she never shows it most of the time. Even in situations which are emotional, she doesn't appear to move in at least. Additionally, Ai is quiet and serious, as she seems to chat only when the need arises rarely speaking for the sake of it. In the event that Ai does talk out of ordinary circumstances, it is about something in which is necessary for someone to know, or to correct somebody when needed, notably her clients. The main reason for her introverted personality is that she had been used on growing silent. 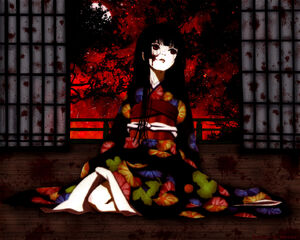 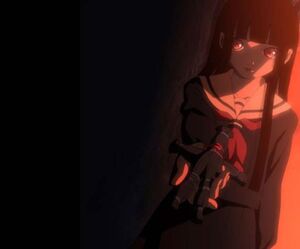 Retrieved from "https://villains.fandom.com/wiki/Enma_Ai?oldid=3817010"
Community content is available under CC-BY-SA unless otherwise noted.