Get more of Muzan's blood and become more powerful.

Enmu (魘夢) is a supporting antagonist in Demon Slayer: Kimetsu no Yaiba. He was part of the Twelve Demon Moons as Lower Moon One and served under Muzan Kibutsuji. He was the last of the Lower Moons to be left alive and attacked a train with 200 passengers, with Demon Slayers among them.

He is the arc villain of Demon Train Arc, and subsquently being the main antagonist of its movie adaptation. He is voiced by Daisuke Hirakawa in the Japanese version, and by Landon McDonald in the English version.

Enmu wears a black suit and he has black shoulder-length hair, that fades into red and blue near his neck. As a demon he has gray skin, visible veins on his head and yellow markings under his blue eyes. On his left eye, Enmu also has the mark of Upper Moon One.

Enmu is extremely sadistic and enjoys seeing others (including his fellow demons) suffer in anguish, despair and agony as he believes he was blessed to be left alive while hearing other demons dying painfully. He particularly likes their agonizing expressions. He is quite loyal to Muzan and is thankful for having been able to kill so many people. He is very intelligent and acts strategically, knowing his strengths and weaknesses.

He is also arrogant and believes humans to be weak creatures. He often abuses problems they have to his advantage and manipulates them into doing his bidding by promising to give them dreams of what they most desire.

Enmu is also shown to be ambitious, as he seeks to kill Tanjiro Kamado so he can receive more of Muzan's blood to gain more powers in his bid to climb the ladder up to Upper Ranks of 12 Demon Moon.

At an unknown point in his life, he was turned into a demon by Muzan and became part of the Lower Demon Moons. He appeared at one of the meetings, when Muzan explained he would disband the Lower Moons. Enmu enjoyed seeing the other demons get killed one by one. Muzan then asked for Enmu's last words to which he thanked him for having being able to create so much suffering. Muzan then decided he was worth keeping alive and gave him more of his blood making him stronger. Enmu's body could hardly process so much new strength and he almost died.

Later he attacked a train and manipulated the conductor into helping him. He then sent some of his demon desciples to attack them. He used his power to put all of the passengers to sleep. He planned to use some kids as his servants by promising them happy dreams. He gave them a rope he created that allowed them to enter the dreams of the other sleeping passengers. They should then destroy their "spirits cores", which would turn them into living corpses, easy for Enmu to later devour. He targeted the Demon Slayers first, as they pose the biggest threat to him and destryoing their cores severes the conscious from the unconscious and prevents them from fighting back. During that time, he started to fuse his body with the train itself and detached flesh from himself to form another body.

He was surprised to see that Tanjiro managed to wake up from his dream through his strong will. Enmu then explained that he enjoys giving people nice dreams, only to turn them into nightmares later. When seeing, that Tanjiro was the one Muzan was after, he saw his chance to get even more blood from him as a reward. He then tried to put Tanjiro to sleep again, but failed and his second body was beheaded. He then revealed how he fused with the train and felt invincible, mocking Tanjiro and enjoying his shocked expression. He prevented them from attacking the train by using the passengers as shields. However, the Demon Slayer Kyojuro cut off the complete front part of the car. Enmu didn't even consider something like this to happen and wallowed in disbelief as he died. 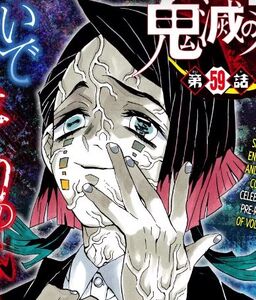 Enmu on a colored page of the manga 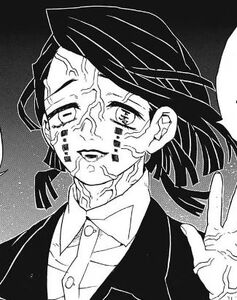 Enmu in the manga 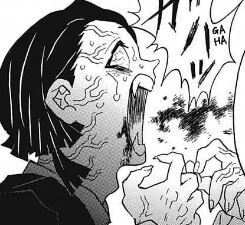 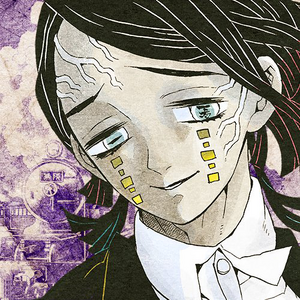 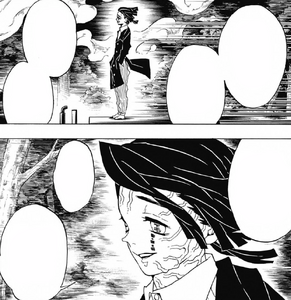 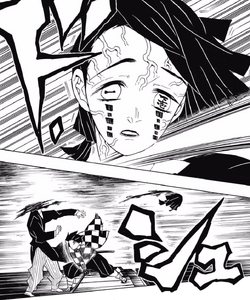 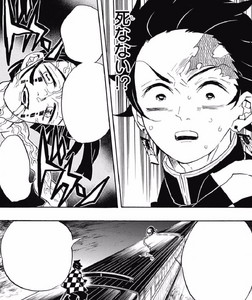 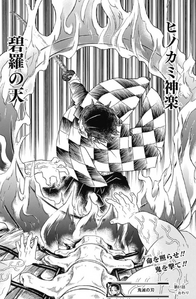 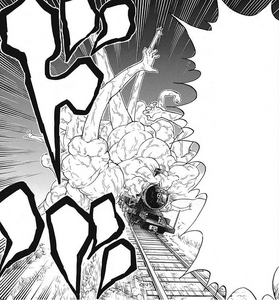 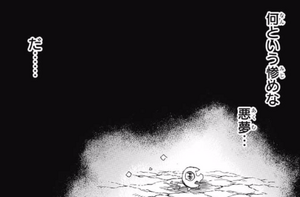 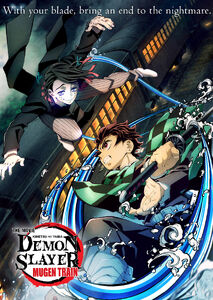 Enmu fighting Tanjiro Kamado on the second poster for the Mugen Train movie. 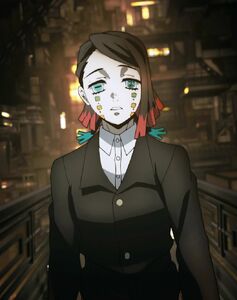 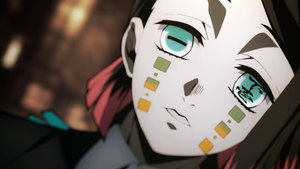 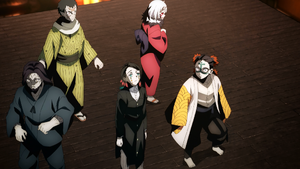 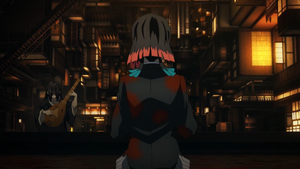 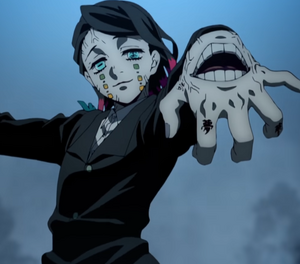 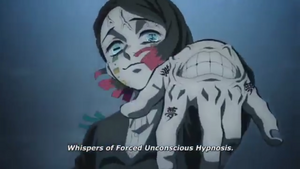 Enmu about to use his BLood Demon Art.
Add a photo to this gallery

Retrieved from "https://villains.fandom.com/wiki/Enmu?oldid=4331822"
Community content is available under CC-BY-SA unless otherwise noted.