Trying to enter the secret room (in the Fake Ending).

Escape Circus Baby's Entertainment and Rentals and hide inside of Michael Afton's body (succeeded for a while in Real Ending, Succeeded post-game in Fake Ending).

Ennard is a major antagonist in the Five Nights at Freddy's franchise.

It is an animatronic created from the endoskeletons of the main four members of the Funtime Animatronics. Ennard's ultimate goal is to take the protagonist's identity, in order to escape the restaurant without being noticed. It later appears as Molten Freddy after separating from Circus Baby in Freddy Fazbear's Pizzeria Simulator.

While using Circus Baby's voice, it is voiced by Heather Masters. Meanwhile, as Molten Freddy, he is voiced by Kellen Goff.

Ennard was created on the 5th night of Five Nights at Freddy's: Sister Location, at Circus Baby's Entertainment and Rental from the remains of the other animatronics that were sent to the scooping room. It appears that the personalities of the animatronics take turns in assuming control of Ennard. Ballora apparently controls Ennard when Circus Baby is guiding the protagonist toward the scooping room. However, Baby herself seems to be the dominant personality of Ennard. It's also implied that William Afton's daughter Elizabeth is also a part of Baby/Ennard due to Baby having her eyes and mentioned hearing her in her head.

On the fifth night, as Michael follows Baby's instructions, Ennard appears to him through the scooping room window, waiting for the scooping process to be over. It then assimilates with Michael's body, seeing it's eyes through his. In the Custom Night mini games, it's revealed that while Ennard was inside of it, Michael's body was starting to decay and eventually forced Ennard out of it in pieces. Soon after, Michael comes back to life, with Ennard, still in pieces, watching from within the sewers.

If the player decides to not follow Baby's instructions and has finished Baby's minigame, he will enter a secret room and Ennard will try and pursue the protagonist. Circus Baby speaks through Ennard as it tries to get inside the room, needing Michael to escape the facility. It is unable to understand why Michael doesn't want to help. It then starts speaking in the voice of Elizabeth (hinting that William's daughter became a part of Baby, and by extension, Ennard). After surviving the night, Ennard appears in Michael's home while he is watching television. What happened after that is unknown, though it is presumed that Ennard killed Michael from there.

It's revealed that Ennard's remains eventually reformed into Molten Freddy after Baby's parts are removed from it. It was salvaged alongside the other animatronics and later burns in the fire in the good ending.

One of the endings reveals that Molten Freddy/Ennard has remnant inside itself.

Ennard returns as a customizable enemy in the game Ultimate Custom Night. It will crawl through the vent on the top of the office. The player must listen for a squeaking noise and then close the vent door. Once a thud noise is heard, Ennard is gone and it is safe to open the door again. Failure to stop him in time will result in a jumpscare followed by static noises and occasionally his signature squeaking noise playing in the background of the Game Over screen.

Ennard returns in FNaF VR: Help Wanted in the second vent repair level and it's Hard Mode equivalent. In this level, the player must traverse through different parts of the level repairing various things including gears, wiring, and a variety of different contraptions whilst defending themselves against Ennard. At the conclusion of the level, Ennard gets caught in a fire and is destroyed. In the Hard Mode of the level, the player must fix the same things throughout the level with the difference between the original being that the Hard Mode has a Blacklight coloration making certain things harder to see. At the end of the Hard Mode, in a scripted event, Ennard kills the player with the implication being that Ennard survived the fire at the conclusion of the Normal Mode vent repair level.

The Blob appears in Five Nights at Freddy's security breach it is a fusion of every animatronic from previous games with Funtime Freddy seemingly in control like how he was as molten freddy. It also seems that animatronics such as Bonnie, Chica, Mangle, a few Endoskeletons, and even animatronics such as Baby and Marionette are apart of the amalgam. 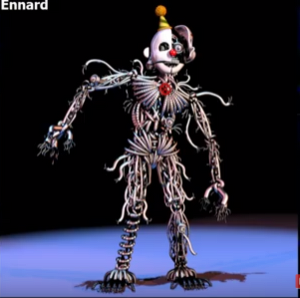 Ennard as it appears in the secret room. 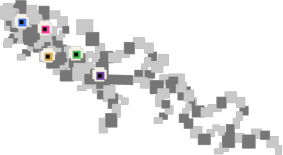 Ennard's successful defeat by getting puked out by Michael Afton. 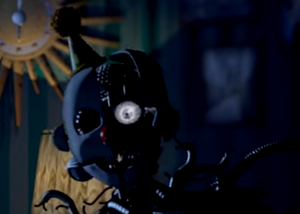 Ennard in the player's house, as seen in the fake ending.