Aiding the technician, Trying to enter the secret room

Escape Circus Baby's Pizza World and hide inside of the technician body.

Ennard is an animatronic created from the parts and personalities of all the other animatronics in Circus Baby's Pizza World. It is the true main antagonist in Five Nights of Freddy's: Sister Location. Ennard's ultimate goal is to take the protagonist's identity, in order to escape the restaurant without being noticed.

Ennard was created on the fifth night at Circus Baby's Entertainment and Rental from the remains of the other animatronics that were sent to the scooping room. It appears that the personalities of the animatronics take turns in assuming control of Ennard. Ballora apparently controls Ennard when Circus Baby is guiding the protagonist toward the scooping room. However, Baby herself seems to be the dominant personality of Ennard.

On the fifth night, if the protagonist follows Baby's instructions but hasn't finished Baby's minigame, Ennard appears to him through the scooping room window, waiting for the scooping process to be over. It then assimilates with the protagonist's body, seeing it's eyes through his.

If the protagonist follows Baby's instructions and has finished Baby's minigame, he will enter a secret room and Ennard will try and pursue the protagonist. Circus Baby speaks through Ennard as it tries to get inside the room, needing the protagonist to escape the facility. It is unable to understand why the protagonist doesn't want to help or why he doesn't want to be with his daughter and starts speaking in her voice (hinting that she became apart of Baby, and by extension, Ennard). If the protagonist survives the night, Ennard appears in protagonist's home while he is watching television. What happened after that is unknown. 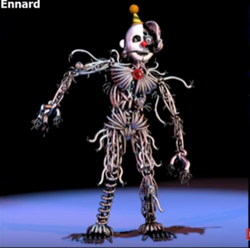 Ballora Endo.png
Ennard without its clown mask
Add a photo to this gallery

Retrieved from "https://villains.fandom.com/wiki/Ennard?oldid=1732452"
Community content is available under CC-BY-SA unless otherwise noted.