Evolve into the new Messiah.

He was portrayed by Syo Jinnai.

Enter was created from the data of the numerous scientists that Messiah absorbed. Though resembling a human, Enter is pure data made physical and cannot be easily destroyed. He made himself first known to the Go-Busters and the Energy Management Center when he stole enough Enetron to power a small city for a year and since then attacked the city for more Enetron with the use of Metaloid monsters. But as the Go-Busters proved to be troublesome, Enter devised counters from researching their Weak Points to gaining the blueprints for the BC-04 Buster Machine which later proved a mistake when it turned out that the blue prints were secretly given to their creator Masato Jin.

However, using the Filmzord's ability to project subspace in a surrounding area, Enter had that feature added into the remaining blank Megazords still in their possession. But when the Avatar Escape is created to take over human suffering, Enter resolved to use an evolving program on Messiah to increase his "Majesty's" power. Despite his attempts to keep the Go-Busters from entering Subspace, Enter's origins are revealed as he was seemingly destroyed in the Espilon-Type Megzord while attempting to protect Messiah's core.

But in reality, surviving the incident, Enter created back-ups of Messiah's data in the Messiah Cards before scattering all but one across the city in what he called a game where new Messiah would be born from one of the twelve Messiah Metaloids. However, secretly implanting Messiah Card inside Hiromu's body and using Messiah Card 04 on himself, Enter reveals his true intention to transform into a new Messiah while taking Messiah Card 07 to use as leverage due to having the bulk of Masato Jin's data in it. Though seemingly killed by Escape, Enter reveals that the Messiah Card 13 was inserted into Hiromu's body. Besides serving to contain his back-up data, Enter reveals that final Messiah Card also received the data that the Messiah Metaloids gathered. Now able to assimilate organic and inorganic material, also able to assume an evil version of Red Buster, Enter proceeds in his scheme to remold the world in his likeness. However, the Go-Busters manage to trap Enter in the collapsing Hyper Space with Jin sacrificing his physical body to remove the Messiah Card from Hiromu. With his back up and leverage both destroyed, Enter battles the Go-Busters and is finally destroyed.

Enter, along with Escape were both revived as they were part of a Vaglass restoration program. They then team up with Deboth Army to awake Borudosu. However, they were defeated by the Kyoryugers.

Due to his nature, Enter is blending of various peoples' strong points. He is very eager, cheerful, effervescent, charismatic, and enthusiastic, often at inappropriate times with a superiority complex. Other than his habit of wearing goggles, Enter sprinkles French words into his speech. Though he normally plays with the Go-Busters, he can get serious when needed to. Since confronting Red Buster, Enter developed an interest in humans and wants to fully grasp everything about them to complete his evolution into a new Messiah. However, Enter's knowledge of humans is still limited. 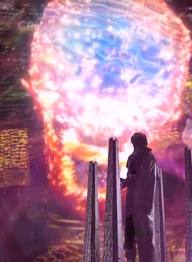 Enter reporting to a simulation of Messiah. 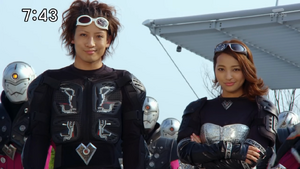 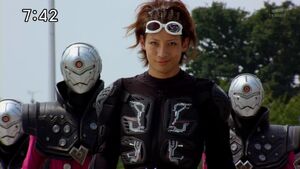 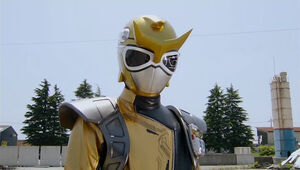 Dark Buster
Add a photo to this gallery

Retrieved from "https://villains.fandom.com/wiki/Enter?oldid=3920087"
Community content is available under CC-BY-SA unless otherwise noted.