Kidnap Weaver and remove him from the timeline.

Delusional Mastermind
Entity303 is the overarching antagonist of the Gameknight999 series, appearing as the main antagonist of the Mystery of Entity303 series. He is a former Mojang employee who was fired for creating the Herobrine virus. He has stolen Gameknight's father's digitizer to go into Minecraft and wreak havoc in the game.

He also appears as an occasional boss in Minecraft mods

Terrors of the Forest

Entity303 creates a time portal to the Great Zombie Invasion to kidnap Crafter's great-uncle Weaver. Without Weaver in the timeline, there is no one to teach Crafter his love of TNT that helped them through all their battles with monsters.

At the White Castle, Entity303 creates an enchanted book that will take him into the Mystcraft Ages. A manticore keeps Gameknight and his friends busy while Entity303 escapes into Mystcraft.

Monsters In The Mist

While in Mystcraft, Entity303 forms an alliance with King Iago to create a rocket to take him out into space. King Iago and his servants try to repel Gameknight and his friends, only to be overpowered. During the final battle, Entity303 gets into the rocket and blasts off into space.

Mission To The Moon

Entity303 flies across space, heading for the edge of the universe. He reaches the end and prepares to unravel the universe, only for Gameknight and his friends to reach him. Entity303 is shot with Forpech's staff, causing him to see the error of his ways. Entity303 helps Gameknight fix the damage, then guides him to the time portal where he took Weaver from. Gameknight returns Weaver to his own time period, repairing the timeline. 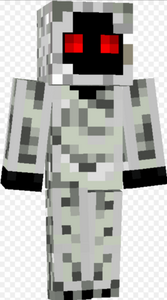