Kill the Elric brothers (succeeded in killing Ed for a time, but failed to stop Alphonse from reviving him).

Envy is the secondary antagonist of the Fullmetal Alchemist 2003 series. He is the son of Hohenheim and Dante and the half-brother of Edward and Alphonse Elric. He is also the first Homunculus and Dante's top enforcer.

In the Fullmetal Alchemist franchise, Envy's manga and 2009 anime counterpart was pitiful. However, the 2003 anime version is an even bigger sadist than the original, and gets his fun out of ruining people's lives.

He is voiced Mayumi Yamaguchi in Japanese and Wendy Powell, the same voice actress who voiced the 2009 anime counterpart, as well as Mike McFarland, who voiced Envy's true form, in English.

This version of Envy is drastically different than his manga counterpart, where instead of being envious of humanity as a whole, he is rather particularly jealous of the fatherly love that Ed and Al received, and is known for his unhealthy grudge towards his "father" who he attempts to (and eventually succeeds) kill throughout the series.

He is extremely cruel, aggressive, manipulative, and sadistic, gleefully causing all forms of suffering, whilst showing no remorse whatsoever. Because of that, he has absolutely no love for anyone (including his homunculi brethren), and has clashed with his own allies (with the exception of Dante herself, due to the power she has over him), often verbally and sometimes physically abusing them.

The animosity Envy had felt towards Hohenheim stems from both lack of acknowledgement (in regards to being his son), and the abandonment he had suffered moments after being created (the reason why he rejects his true form). In fact, the resentment he felt was so great to the point that he willingly threw himself into "The Gate" to cross over and personally kill him (while completely disregarding Ed's advice). In the movie, he was still callous and bent on revenge, with Dietlinde Eckhart exclaiming that Hohenheim was the only means of soothing him, and was later satisfied in killing his "father", despite knowing that he would also be transmuted as well in the process.

Unlike most of the other homunculi, Envy has no desire whatsoever to become human.

He is also arrogant and egotistical, as he shown when he sheds his disguise as Father Cornello, and shows his true form, he calls it "adorable", as if he is proud of his true form the he is with other disguises.

However, in spite of his utter sadism and his jealousy with Hotunheim, this version of Envy is actually quite intelligent, charismatic, persuasive, and perspicacious, perhaps far more so than the original Envy. He knows how to manipulate and deceive others into doing his (or Dante's) bidding. A perfect example of this is when he manipulated Wrath into joining him by feeding him fragments of the Philosopher's Stone, and offering him a chance of learning his true past. This is what made Wrath later become quite childish, but evil and manipulative in return. Also, while Envy otherwise lacks morals, he does look shocked after finding out what Dante did to Gluttony.

Envy has the ability to shape-shift, he can even change his limbs into a weapon. He uses this power as a form of infiltration or to taunt enemies (i.e. playing on their weaknesses). He also has the typical homunculi strength, speed, and resilience.

Unlike his manga counterpart, this version of Envy is far more skilled in combat, his attacks range from simple punches and kicks to Capoeira-like techniques. He is also very gymnastic, able to do somersaults with grace and as a form of evading his opponent's attacks. As a testament to his might, he knocked down Pride (an opponent who is implied to be deadlier than himself), and had to be distracted by Wrath in order for Ed to pin him down or land a hit on him.

As a dragon in the movie, Envy's forced to outright eschew his former fighting style and opts to use his powerful jaws and massive body, quickly overpowering Ed in their brief fight and nearly killed him (he had also used his tail to fell one of the planes used to capture him). Furthermore, because he traveled through "The Gate", his body was used as material to open it (evident when his body was glowing with alchemic marks, after Dietlinde Eckhart touches him).

In the 2003 anime series, Envy is the first Homunculus created. As in this (radically different) storyline, Homunculi are created after a human transmutation, which only produce and alchemic "clone" of the deceased one. He was created almost 400 years before the beginning of the series by Dante (this storyline's main villain) and Hohenheim, in an effort to revive their late son who died of mercury poisoning.

Envy played a key role and is responsible for sealing Greed inside of the 5th laboratory. He had also helped recruit some of the other homunculi (like Wrath).

Envy remains at Dante's side and plans to someday kill Hohenheim (who abandoned him and Dante after realizing that their son would never truly return) for not recognizing him as a son. He is also extremely jealous of the protagonists of the series, Edward and Alphonse Elric the sons of Hohenheim (for receiving the parental love that he never got). Because of this, he rejects his true form and pretends to have forgotten it. He harbors a fierce hatred for humans, wanting to kill as many of them as possible and would stop at nothing to kill his "father" and "brothers".

Envy even explicitly stated that his real reason for carrying out Dante's dirty work is for the sole pleasure of seeing humans die and suffer. After his final battle against Edward Elric, in which he reveals his true face to distract Edward and then stabs him in the heart, killing him. Envy later meets Ed at "The Gate", after failing to stop Alphonse from reviving his brother with the Philosopher's Stone, and learns that Hohenheim is on the other side of the gate. Envy forces his way in by transforming into Edward, his original form, and lastly a huge snake-like dragon, and goes beyond the Gate of Truth into the real world, where his "father" has been banished.

During the two-year gap between the end of the anime and with Conqueror of Shamballa, Envy was captured by the Thule Society. With alchemy nullified on Earth, leaving him in the dragon form that he crossed The Gate as, the Thule Society intends to use him as a literal Ouroboros to open a physical Gate and transfer their soldiers to the other side to "Shamballa". Hohenheim was imprisoned and offered to Envy as a sacrifice; a human chew-toy to keep the "Great Serpent" calm as they formulated their plans.

Around the time of Fullmetal Alchemist the Movie: Conqueror of Shamballa, Envy escaped and took shelter in an abandoned castle, only to cross paths with his younger half-brother Edward once again. In their ensuing fight with Envy having the advantage, the serpentine homunculus was attacked on all sides by the Thule Society with gun-mounted stakes and planes, who recaptured him and managed to get a small regiment of soldiers to the other side for a short time. In the end, it was Hohenheim who took his own life using Envy as his means, enabling Ed to return to his own world in a final act of redemption for his sins, using Envy's body as material to create a gate between the two worlds. Thus, Envy's goal of killing Hohenheim was finally fulfilled, ultimately at the cost of his own life. He was the seventh and final Homunculus to die in the series.

It is unknown whether or not Envy forgave Hohenheim before his death, though it is unlikely. 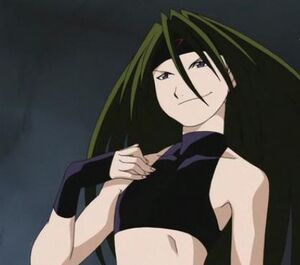 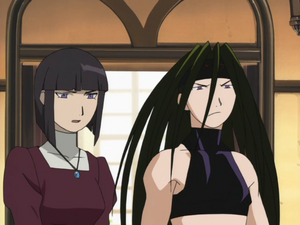 Envy and his mother Dante. 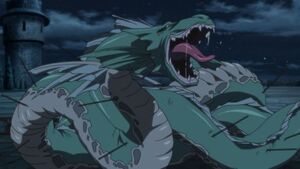 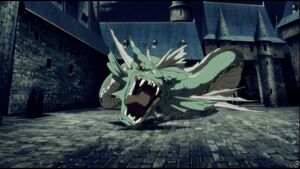 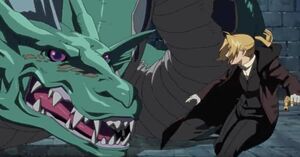