Lead singer of The Clash at Demonhead

Natalie V. "Envy" Adams is the secondary antagonist-turned-anti-heroine of the comic series "Scott Pilgrim", and a minor yet pivotal antagonist on its movie adaptation/game "Scott Pilgrim vs. the World". She is Scott Pilgrim's ex-girlfriend before Knives Chau, and the current date of Ramona Flowers' third ex, Todd Ingram.

She was portrayed by Brie Larson.

Envy was said to be a cool and funny person before the fame blinded her. When dumped, she became malicious and vengeful, vowing to humiliate Scott and defeat him internally, as well as take out whoever's dating him, not much differently from the League of Evil Exes. However, after Gideon is defeated and she apologizes, Natalie becomes humble and sympathetic once again, asking for Scott's forgiveness rather than humiliating him further.

Natalie was introduced to Scott when she and Julie Powers were still roommates at the University of Toronto. They began dating after thinking Julie was tired of her, and along with Stephen Stills, created the band "Kid Chameleon". Introduced as a dork with many anime-related dolls and toys, she began selling them to buy expensive clothing, change her name to "Envy" (which is a play with her inicials "N" and "V") and to produce merchandise of the band, along with signing with major record labels, something Scott and Stephen didn't want at the time. Scott, however, still sought a relationship with her to the point of writing a song to her, but fame blinded Envy beyond any understanding and he broke up with her when she signed them with a famous label. There is a theory explaining that Scott broke up with Envy in a fit of drunken rage, and after the breakup, tried to repress such memories, which resulted in the creation of Nega Scott.

In the comics, Scott meets Envy at Lee's Palace where Clash at Demonhead is performing, and is shocked to see her dating Todd Ingram, Ramona's third ex-boyfriend. She calls the Sex Bob-omb and Ramona into the backstage, just to show them she is better than them. Todd reveals his "vegan powers" and throws Scott into an alley, but Envy calls off the fight due to being too late of night. They meet again at another stage, and Envy sets a race between Scott and Todd, but he accidentally implodes the place with his powers, forcing Envy to delay the fight again. The band is called into another club, and she again meets Scott at an alley and they have a formal conversation, but Envy dismisses him again. She finds Ramona at a bar and they argue, eventually fighting each other with the crowd cheering for Envy, who almost kills Ramona with her own hammer until Knives helps her. Angered, she seeks Todd's help, but Ramona tells her he was cheating on her back with the band's drummer, Lynette Guycott. Her suspicion is cleared when Todd leaves the restroom with Lynette's panties.

Seeing this, Envy flies into rage and tries to kill Lynette with Ramona's hammer, but only manages to take off her robotic arm before she teleports away. She then kneels Todd in the groin and leaves in anger, only to return and watch in sadness while Scott headbutts Todd into 3000 points and some coins. She is not seen again until the last chapter, this time dating Gideon. When he's defeated, she reverts back to her "Natalie" self and apologizes to Scott and Ramona. What happens to her after that is left unknown.

In Scott Pilgrim vs. the World, Envy is blonde instead of red-haired and there is no fight between her and Ramona, or even Lynette, because the plot about Todd cheating on her with the drummer never happens. Envy is hinted by Scott many times in the movie, but it is only later on that she calls Scott on the phone, telling him and his band to watch the Clash at Demonhead show. Envy is only fully seen when Scott is about to fight Ingram. After his defeat, Scott tells her they're even and calls her by her true name, causing her to reflect if it really was a good idea to leave him. And much like in the comic, she is never seen again after her realization.

Envy is a sub-boss along with Lynette in World 3. When in critical health, she and Lynette will fight each other until both are defeated. 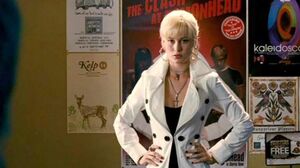 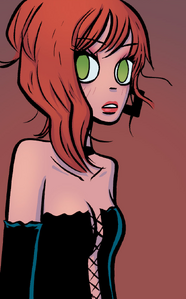 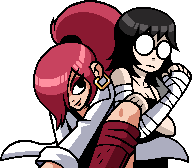 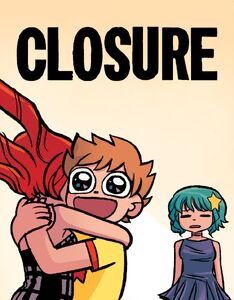