Envy Chiruda is a swallow-themed Gangler Monster and is the main antagonist in episode 33 of the 2018 TV series Kaitou Sentai Lupinranger VS Keisatsu Sentai Patranger. Also he is equipped with an industrial turbo fan-like treasure called Le porte-tempête.

He is voiced by Tetsu Shiratori who previously voiced Yokubarido, Debo Doronbosu, Halbergoi and Dave Red.

Envy Chiruda's head is a green swallow claw grabbing a brown nest full of white baby skeleton swallows, his body has a black swallow head with a yellow beak, under the swallow head there's a Gangler safe, his white arms has black wings on it, his legs are green leak legs, his weapon the Super Soup Spoon is a yellow frying pan metal club.

Envy Chiruda made his first appearance when he transformed the adults into their children form. He was then confronted by the Lupinrangers and they were about to steal his treasure, but he used the treasure's ability to keep them away from his safe, but they came prepared when they brought umbrellas. However he then used his own ability to revert them into their child-like form. However Noel arrived so he'd battle him instead. But when the police shows up he'd used the treasure's ability to make a getaway.

A while later he appeared on the edge of a building right in front of the police once the duo transformed Envy used the treasure's ability to safely float back down to the ground in order to battle them. A while later during the fight he used his own ability to revert the two cops into children, but they kept dodging them. However when he got a chance to revert Patren1gou into a child he was then knocked back by the arrival of Patren1gou and Patren2gou. During the battle Noel has successfully gained access to Envy's safe (which his password is 3-8-6) and got Le porte-tempête (which translate as "The storm-holder") industrial turbo fan after that he was then taken out by PatrenUgou and Lupin X causing those that's been transformed into children back into their adult selves including the Lupinrangers.

However thanks to Goche Ru Medou he was then enlarged and now battling Pat Kaiser Strong Biker and X Emperor Slash he used his other ability to fly away from the fight, but he was forced back down to the ground where he was then destroyed by this finisher called Pat Kaiser Thrust-Up Strike. 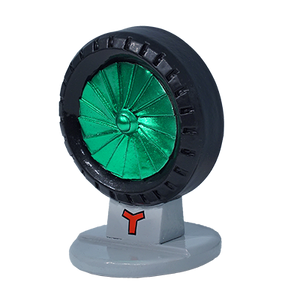