No information
Enyo (true identity Dionysus) is an antagonist from Is It Wrong to Try to Pick Up Girls in a Dungeon?.

He was voiced by Matsukaze Masaya.

He resembles a pale-skinned man with short blonde hair and green eyes.

When he dresses as Enyo, he wears a black hat, a mask that's primarily black and white, a black cloak with 11 masks, and black gloves.

When dressed in his "God of Wine" attire, he wears a laurel crown, a gold necklace, white pants, and sandals.

Dionysus, in his normal attire, first appears by a window surmising about the Loki Familia returning to the surface holding a magic stone in his hand as a cloaked figure walks up to him.

He next appears at a party for gods where he greets Loki alongside Demeter where he remarks about days going by without hearing rumors about Loki's Familia and that his is still puny.

He also says that it doesn't matter if they are in the guild or Ganesha himself if the other familia disagree and that something whimsical as bringing monsters to the upper surface for bit of a spectacle wouldn't be possible.

He then asks Loki if she will attend the Monsterphillia. Demeter then asks him if he has some sort of wicked scheme up his sleeve. 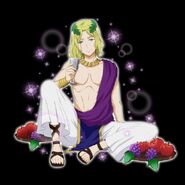 God of Wine Attire
Add a photo to this gallery

Retrieved from "https://villains.fandom.com/wiki/Enyo_(Danmachi)?oldid=4110971"
Community content is available under CC-BY-SA unless otherwise noted.