Use the Hands of Armageddon to open a time rift between Earth and Chronia and freed his Chronian race to conquer Earth.

Rule all of the timelines (both failed).
Destroy all realities if he cannot rule them.

He was voiced by Yuri Lowenthal (who also voiced Albedo and Mad Ben in Ben 10, Vilgax in the 2016 Ben 10 reboot, Male Courier in Fallout: New Vegas, Joseph Oda in The Evil Within, and Neil Fisher in Resident Evil: Revelations 2) when he was masked and Sean Donnellan (who also voiced Lanfranco Cassetti in Agatha Christie: Murder on the Orient Express and Cryptosporidium in Destroy All Humans!) when he was unmasked in in Ultimate Alien, Judd Nelson (who also played Nathaniel Burke in Steel) in Omniverse, and portrayed by Christien Anholt in Race Against Time.

Eon was originally a member of an alien race known as Chronians, whose homeworld, the planet Chronia, was banished out of time as a result of their folly with their powers. After escaping this fate and landing on Earth, he seeks a rare object known as the Hands of Armageddon that can free his people and start a war against Earth. However, he was taken into custody by the Plumbers and was frozen in a cryogenic cell for 200 years before finally thawing out and aging his guardian to near death. He then recruits ape-like henchmen to help him reach the Hands.

In Ben 10,000 Returns, it is revealed that Eon is actually an alternate version of Ben Tennyson from another timeline.

Eon first appears when he starts blasting energy at objects in the town of Bellwood. Later, when Heatblast appears and then the police appear. Heatblast stops Eon's Servants and later seemingly defeats Eon.

Later, Eon appears at a clock tower. When Eon gets a headache, one of his servants try to help him but he kills it with an energy blast revealing its face. Eon informs the rest of his servants to "let him die", as they are here to serve him, not each other and threatens them to put them back in their cold cages. Eon views his home planet and the ships of the fleet of his race who are trapped outside of time and space. He says that nothing shall thwart him once Ben Tennyson is dead.

Eon appears in an image that Gwen Tennyson has taken. When Max Tennyson appears he tells Ben and Gwen about Eon. Later, Ben, Gwen and Max Tennyson meet up with a plumber who was in charge of Eon, Constantine Jacobs that was aged by Eon to the point that he was old in the blink of an eye. After the plumber finishes explaining about Eon, he dies.

Eon later appears, trying to activate the Hands of Armageddon but he's to old to do so. When Eon sees Ben Tennyson, he malfunctions his Omnitrix. Ben Tennyson tries to get away but Eon gets him cornered. Eon is stopped by an old plumber.

Later, Eon appears at the hall of Ben's school. Ben fights Eon as Diamondhead. Eon reminds Ben that when an alarm sounds, the entire school gathers to the hall. Eon teleports away and Ben hides.

Eon appears with Ben, Gwen and Max, chained, after being kidnapped by his servants. Eon tells Ben, Gwen and Max about his race, planet, the Hands of Armageddon, the Omnitrix and he also tells Ben that he is him. Eon turns Ben into a younger version of himself and teleports away as two cannot exist in one world.

Later, the real Eon appears and stops time, except from Ben. When he throws Ben, Ben turns into Wildmutt and fights him. Eon is whacked into the Hands of Armageddon by Wildmutt using frozen Gwen, defeating Eon.

In "Ben 10,000 Returns", it is revealed that Race Against Time was just an alternate timeline. As it turns out, Eon survived the battle against the Ben of that timeline and had been hunting down alternate versions of Ben, stripping them of their powers and placing them under his control. He is first seen battling Ben 10,000 at his headquarters. His servants join in when Eon points out that he didn't come alone like Ben 10,000 anticipated. Ben 10,000 traps Eon's Servants in Diamondhead crystals and blasts Eon away with Clockwork's time ray, seemingly destroying him in the process. However, Professor Paradox arrives and reveals that Eon actually tricked Ben 10,000 into sending him to the Main Timeline where another version of the Hands of Armageddon can be found. The duo also travel to the Main Timeline and encounter present-day versions of Ben Gwen and Kevin, who already found the Hands before Eon does. After explaining cross times to the gang, the team carry the Hands into the desert where both Bens begin destroying it using Way Big and Clockwork respectively. Unfortunately, this turned out to be a ruse planted by Eon to get them to open a bridge for him and his minions to pass through. During the battle, Eon destroys Way Big Swampfire and Ultimate Swampfire by aging them to dust with his powers. Gwen then uses a spell to freeze time where it is revealed that Eon's servants are all alternate versions of Ben. Eon also unmasks himself showing an identical face to that of Ben 10,000's, revealing his reason for hunting down the alternate versions of Ben so that he can be the one and only Ben in the space-time continuum. Just then, the real Ben uses Jetray to destroy the Hands and both Eon and his servants vanish much to Eon's dismay. According to Professor Paradox, the alternate versions of Ben are now restored to their respective timelines and the Hands of Armageddon is destroyed in not just one timeline but in all of them.

Eon reappears in the episode "Ben Again", having been trapped in the main timeline by Professor Paradox. Wanting the freedom to travel multi-dimensional once more, he tries to lure the time-walker into showing up by switching 16 year-old Ben's mind with that of his 11 year-old self. Knowing that Paradox wouldn't show up in the present (as the 11-year-old Ben doesn't know him), he goes to 11 year-old Ben's time zone and manages to capture Paradox taking him to his own dimension for interrogation. Eon demands the possession of the Chrono-navigator, but Paradox claims he doesn't have it. Aware of the time-walker's inability to lie, Eon discovers that his robotic hand (which he sliced off of Paradox during their battle) was his Chrono-navigator and manages to retrieve from 11 year-old Ben in the present day. Eon decides to use it to control all timelines, but misuse over the device angers him to the point where he decides to destroy all reality instead. Paradox urges both Bens to use their parallel versions of Clockwork to banish Eon back into his own dimension while he is freed by both 11 and 16 year-old versions of Gwen. Paradox reunites with his Chrono-navigator and undoes the damages Eon caused in the episode.

In "And Then There Were None", Eon joins forces with Vilgax to create an army of evil versions of Ben (which is made up of Albedo, Bad Ben, Nega Ben, Mad Ben and Benzarro). Together, they travel to the No Watch Timeline to target No Watch Ben, who is the only Ben in the universe to have never received an Omnitrix. Luckily, Ben Prime and Professor Paradox also travel there to rescue No Watch Ben and bring him to Los Soledad where Professor Paradox explains cross-times to No Watch Ben. After Paradox leaves to investigate, Eon shows up and tries to kill No Watch Ben. To make matters worse, Vilgax and the evil Bens find them and surround them. Just then, Professor Paradox manages to gather his own army of good Bens: Ben 10,000; Ben 23 and Gwen 10. As both armies struggle in battle, Vilgax betrays Eon and uses a Chronosapien Time Bomb to destroy all timelines in reality with the exception of the No Watch Timeline, thus wiping out every Ben Tennyson who ever had an Omnitrix including Eon himself.

In "And Then There Was Ben", Eon appears in a past battle against Ben 23 attempting to recruit him. Unbeknownst to him, Professor Paradox Gwen 10 and No Watch Ben (who acquired the Omnitrix from Ben Prime before the latter's death) were also in Dimension 23. The three manage to secretly help Ben 23 without being caught by Eon, causing him to leave. Later, Eon and the other alternate versions of Ben were resurrected when No Watch Ben used Clockwork to restore the timelines that Vilgax destroyed earlier. Eon angrily attacks Vilgax for his betrayal, but was stopped by Ben 10,000 as Atomic-X. Eon and the evil Bens were then sent back to their respective timelines by Clockwork.

Eon reappears in "Let's Do The Time War Again" where he sends Exo-Skull and Subdora to distract Ben and Rook while he hatches one of the Time Beast eggs hidden in Undertown and ages it to a fully grown adult monster that goes on a rampage nearly destroying Bellwood and sucking into a black hole. Professor Paradox and Ben 10,000 catch on to Eon's plan and rewind time multiple times to help Ben and Rook stop the Time Beast before it goes into flux. While they successfully capture the Time Beast and shrink it back into an egg, Eon steals two more eggs and presents them to Maltruant.

In "The End of an Era", Eon was summoned to Ben 10,000's Timeline by Maltruant, bringing with him a Time beast-pulled chariot. Maltruant pushed Eon off the chariot, telling him that his services were no longer required. Eon was angered, saying they had a deal. Maltruant responded by nonchalantly sending Eon back to his own timeline.

Eon is essentially a psychopathic and destructive individual. He is willing to mess up the timelines just to get what he wants, and if he can't rule, he is willing to destroy every existence. Eon can be extremely cunning, dangerous, and manipulative in combat, waiting throughout the physical fighting until the time is right for him to make a climatic move. Eon can also be very bloodthirsty, sadistic, and cruel, as when he thought that Vilgax was going to use his Chronosapien Time Bomb to erase No Watch Ben and his entire timeline, he was impressed and commented, "Nice!". He apparently has a long history with and a strong dislike of Professor Paradox, to whom he is frequently equal yet inferior; while Eon can be a very intelligent and clever individual who can perceive the fragility of spacetime, unlike Paradox, he fails to recognize that the fullest power of a nigh-omnipotent device, such as the Chrono Navigator is nothing that can be exploited and controlled without any calamitous consequence.

Eon is also willing to work with other villains when their goals will benefit him in some way, but unfortunately for him, he also fails to realize that the most evil and intelligent of said villains may have treacherous hidden agendas. These would have a detrimental and injurious effect on him once his usefulness has ended. He also fails to learn this from former double-crossings that have happened to him; this was what allowed Vilgax to manipulate, utilize, and eventually betray Eon during their partnership to wipe out the good Bens everywhere in the multiverse, with lethal consequences for Eon himself before No Watch Ben reversed all of the damage. Eon also doesn't respect being backstabbed or duped, as shown when he attacked Vilgax for playing and eventually erasing him. 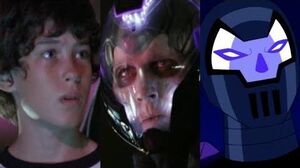