Thomas Howard, or better known by his alias Ephraim Winslow, is the protagonist villain of the 2019 psychological-horror fantasy film The Lighthouse.

He was portrayed by Robert Pattinsson, who also portrayed Connie Nikas in Good Time and Reverend Preston Teagardin in The Devil All The Time.

Prior to the events of the film, it is revealed that Ephraim Winslow is a name taken from his late foreman who died in an accident. His real name is Thomas Howard who for some reason, stole his identity. It is also hinted that he has a criminal background and is born in the mid-19th century.

Winslow is then sent to a remote island off the coast of New England to work as a wickie for an elderly man named Thomas Wake On his first day, he finds a scrimshaw of a mermaid and keeps it whilst developing a sexual facination of it. Winslow soon becomes curious and suspicious the lighthouse that he is permitted from entering after witnessing a nude Wake entering it at night. Winslow begins experiencing visions and dreams of tentacles in the lighthouse, tree stumps floating in the water, and distant images of a beautiful Mermaid.

As the weeks go by, the closer Winslow and Wake get which increases the tension between the two. Winslow would continue to follow orders and carry chores for Wake. Out of sexual frustration, Winslow secretly masturbates to the mermaid scrimshaw but abruptly stops and he continues to see Wake naked. One night at dinner, the two get to know each other and discuss Wake's previous second wickie, who Wake says died shortly after losing his sanity. Winslow reveals that he used to work in Canada as a timberman, but decided to change professions.

The day before Winslow is slated to leave, he notices the water pump is releasing bloody water and investigates. He checks the cistern to see a dying gull floating inside. The one-eyed seagull flies down and attacks Winslow, who grabs it and beats it to death against the cistern. That afternoon, the winds dramatically change direction. That night, a storm hits the island, and the two men get drunk. The next morning, the ferry does not arrive, and Winslow sees a body washed up on the shore. He approaches the naked body and realizes that it is a mermaid, the exact same one from his visions , he gropes the Mermaid"s breasts whilst carassing her body and fin before she suddenly wakes up and starts screeching which scares Winslow off. He runs back into the cottage to find Wake stating that the rations were impacted by the storm. They dig up a crate said to contain extra rations, but it only contains more alcohol.

More nights progress, and the storm continues, and the two men grow closer while remaining adversarial. Winslow unsuccessfully tries to steal the key to the lantern room from a sleeping Wake. He has visions of a lobster trap containing the severed, half-blinded head of Wake's previous wickie. One night, Winslow tells Wake that his real name is Thomas Howard and that he assumed the identity of Ephraim Winslow, Howard's foreman who died in an accident Howard failed to stop. Wake accuses Howard of "spilling his beans," and Howard tries to leave. He attempts to escape on the dory, but Wake destroys it with an ax. Wake chases Howard into the cottage, but inside, Wake claims that it was Howard who attacked him. With no alcohol left, the two begin mixing spirits out of turpentine and honey, and the storm becomes so powerful that waves crash through the windows of the cottage.

The next morning, Howard finds Wake's log, recording his infractions and recommending severance without pay. Wake chides Howard for his work performance while Howard accuses Wake of mental abuse, then begs him to see the light that Wake has been keeping from him. Wake berates Howard, and Howard attacks him. While seeing visions of the mermaid, Wake as a sea monster, and the real Winslow, Howard beats Wake into submission. Howard leashes Wake with a rope and buries him alive in the ration pit. Howard takes the keys and prepares to go up to the lantern room, but Wake appears and strikes him in the shoulder with the ax. Howard disarms Wake with a kettle pot and kills him with the same ax before ascending the lighthouse. He approaches the Fresnel lens, and it stops and opens up to him. Howard gazes into the mirrored interior in ecstasy and reaches his arm inside. He then lets out distorted screams as the light brightens, before slipping, breaking his leg and falling down the lighthouse steps. Howard is finally seen lying naked on the rocks, missing an eye, as several gulls peck at his innards, eating him alive. 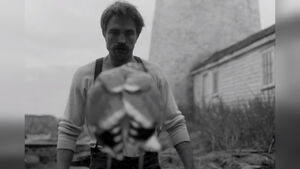 Winslow being harassed by the seagull. 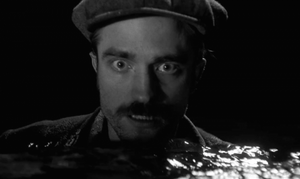 Winslow approaching the Mermaid in a vision.

Winslow having sex with the Mermaid in a vision. 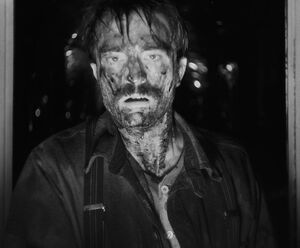 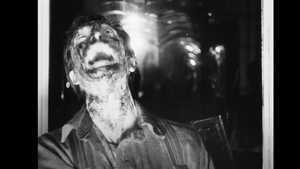 Winslow's psychotic breakdown after he enters the lighthouse, touching the light. 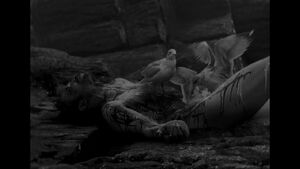 Winslow's dreadful fate.
Add a photo to this gallery

Retrieved from "https://villains.fandom.com/wiki/Ephraim_Winslow?oldid=4025468"
Community content is available under CC-BY-SA unless otherwise noted.