Tales from the Dark Multiverse Issue 2

Punishing those that she deems as villains.

Rid the world of villainy.

The Eradicator is an alternate version of Lois Lane who resides in the Dark Multiverse. After the death of Superman, Lois gained Kryptonian powers from the original Eradicator and made it her mission to rid the world of villainy by any means.

On a unspecified version of Earth in the Dark Multiverse, Superman manages to stop Doomsday from destroying Metropolis, but at the cost of his own life. Lois Lane cradles Superman's body as the Justice League arrive too late to help him and she lashes out at them for not being there for their ally. During a big funeral service for The Man Of Steel, Lois looked on at the Justice League in contempt, believing them to be there for the publicity while those who really knew Superman were forced to watch from behind crowds.

She was further appalled by Lex Luthor giving a speech during the event, and thought Superman would be disgusted by such an act. After the funeral, Lois hoped that the world would change because of Superman's actions. But as time went on, she was disappointed to learn the world was still the same as it ever was and she had decided to give up on trying to change it.

Lois went to visit the Kents in Smallville where she comforted Martha upon learning that her husband had a heart attack and was in a coma because he blamed himself for his son's death. Lois stayed at the farm for some time before leaving to return Superman's tattered cape to the Fortress of Solitude while lamenting about he was one of the only surviving Kryptonians who was sent to Earth as their last hope for the future, something which she felt humanity wasted.

Suddenly, Lois was blown back by an explosion cause by the arrival of the Eradicator who was wailing about how he was too late on placing Superman's body into a Kryptonian life matrix needed to revive him. The Eradicator had retained some of the matrixes energy inside himself and had to expel into someone else. Lois offers to take the power for herself so she can create a world that she felt deserved Superman and bring an end to villainy. Despite the risks, the Eradicator transfers the energy to Lois Lane which transforms her into the new Eradicator.

With her new powers, Lois began seeking out the corrupt and violently punishing them for their crimes without the delicacy or restraint of other crime fighters; Doing things that they would consider crossing the line. She eventually discovers that many weapons used to kill various people in a war-torn country were made by LexCorp and goes to confront Luthor about it. Lex smugly admits he instigated regional conflicts to sell his products, as well as rerouting money from a donation fund he started in Superman's honour to support child soldier programs, and even murdering his secretary after the funeral simply to spite the fallen superhero. Lex then told Lois that he believed the was nothing she could due to lack of evidence. However Lois was not looking arrest him as she grabs Luthor by the neck and flies at high speeds out of Earth's atmosphere, incinerating him.

Lois next decides to burn down villainous organisations and vaporised murderers, although she runs afoul with Batman after killing the Joker. Batman tells Lois that she was going too far with her crusade, but Lois rants about how their way of dealing with criminals was not working and if Superman is dead, then so are his enemies, as she does not want to let him to die in vain. The Dark Knight responds by saying she already has with her actions, infuriating Lois and causes her to attack him.

Despite Lois' display of power, Batman did not back down from the fight which presumably resulted in his death. Lois later returned to Metropolis now believing that the reason Superman held back from using his abilities to the fullest was because the Earth's people can not and did not want to be saved. However she still desired to make the world how Superman wanted, and to do that she had to dispose of the one person who could tarnish his legacy, being Cyborg Superman.

Lois soon finds the villain and demands he removes his cape as he does not deserve to wear Superman's symbol. Although the Cyborg points out that either does she with all the blood on her hands and as he entangled her with his technopathy, Cyborg Superman announces his intentions to destroy the Man of Steel's legacy starting with Metropolis.

Superheroes Steel and Superboy suddenly arrive to help Lois Lane, but unfortunately they were both no match for Cyborg Superman, who claims to be even more powerful than his namesake before blasting Superboy's head with heat vision and crushing Steel inside his own suit. Lois becomes enraged as she breaks free of her bonds to engage in a destructive battle against Cyborg Superman, putting many innocent lives at risk.

As the fight progressed, a number of civilians were almost crushed under heavy rubble. But Lois is shocked to learn that they were saved by Superman, alive and well. He told Lois that despite what the original Eradicator thought, the life matrix did manage to restore him back to life, although it took longer that intended and left him weaker than before. He then notices that the people he saved were frightened by Lois and asks her why this was as Lois dreaded on revealing it to him.

Their reunion was then interrupted by Cyborg Superman wielding a large Kryptonite cannon and Lois thoughtlessly charges at him to protect Superman. The resulting impact unleashed a Kryptonite gas into the atmosphere which Superman choked on. Lois rushed to his side but was too late to save his life, leaving her grieve with the knowledge that she caused Superman's death. 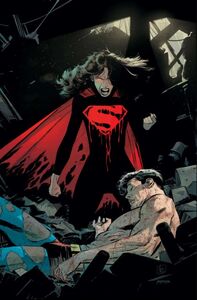 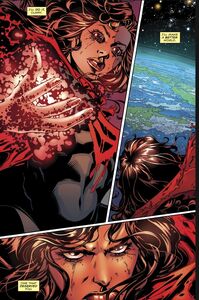 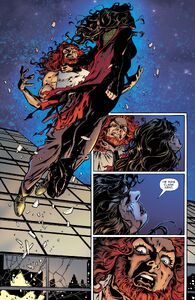 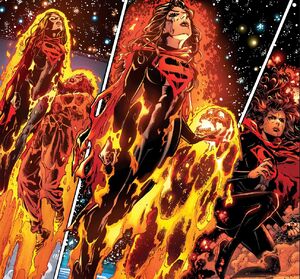 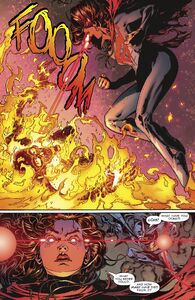 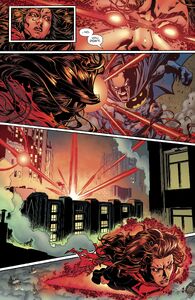 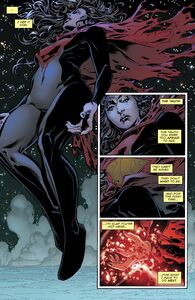 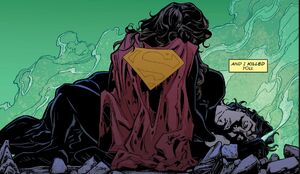 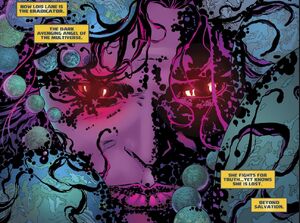 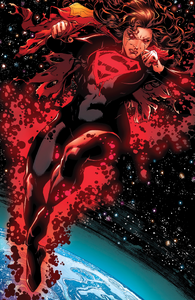