Villains Wiki
Register
Don't have an account?
Sign In
Advertisement
in: Monsters, Evil from the Past, Cartoon Villains,
and 45 more

Sir (by his Minions)
Boss
The Real Nightmaster
The Great Bird

Playing his accordion and singing polka.

Recruiting more villains for their companies.
Watch the perimeters of the city with its security cameras.

Dominate the world and conquer more enemy territories for his reign (succeed in the past).

Destroying the brothers Ti and Chai with the former Woo Foo Army (succeed).
Return to his former post starting a new reign of terror, inaugurate a monopoly empire and lead his new army (almost succeed).
Aniquilates Yin, Yang, Yo and friends and destroying the world (failed).

Resurrected, he forms Eradicorp, a company in which all the villains of the series excluding Carl, who being a cockroach, made customers disgusted. To add onto his hamminess, he has a bizarre habit of starting off his sentences in a flat and calm tone until randomly shouting at the top of his lungs by the end.

He was voiced by Jonathan Wilson, who also voiced Dr. Bedlam in Get Ed.

Eradicus is the original Night Master, and responsible for eliminating Ti and Chai and destroying Woo Foo and has a very moving childhood. He has a massive army made of stone, and took over the world; however, he was later destroyed by unknown means.

Has appeared a few times before his resurrection as simple cameos or little very importance roles:

From the first season seen in "Doomed to Repeat It" which Yin and Yang are taken back in time to learn about the shortcomings of the previous Woo-Foo warriors, Ti and Chai in the fighting with Eradicus, but by a simple dispute they were petrified by it until they were killed.

In the episodes before the number 25 of the second season, he appeared in two especially; the first was briefly in "The Pecking Order" where they tell about how many Nightmasters there were at different epochs. In "Slumber Party of Doooom", Yang searches inside his drawer for something to spoil his sister Yin's sleepover, among so many objects he finds, there is "Woo Foo Book of Forbidden Evil" with the Eradicus hologram that shooting lightning from his eyes.

His deceased minions posed as the ghosts of the Woo Foo Elders to manipulate Yang into collecting the items of power needed to revive him. Tricking Yang into throwing the items into the Night Master's fireplace at the stroke of midnight, Eradicus was instantly resurrected. Upon his revival, Eradicus revived his minions and started the Dark Tomorrow (turning everyone good evil and everyone evil good). With the combined abilities of Yin, Yang (empowered with the items given to him by the League of Evil), and Yo, Eradicus was defeated and the Dark Tomorrow was reversed.

After being brought back to life by Yang in "Welcome To The Dark Tomorrow", he took up the title of Night Master again, and continues to threaten the world.

Eradicus has access to a large number of powers which includes (but not limited to) eye beams, fire breath, punching, magic attacks, and polka playing; in addition, he has great proportional strength and flight capabilities as well, but his greatest asset however is his mind. Despite the occasional rantings and failures to understand modern society he is genuinely evil and intelligent. Many of his schems show a high level of dedication and forethought, employing most other villains in his coffee company, planning and preparing the final assault in Yin Yang Who? quite through.

He is awakened by Yang, deceived by the four helpers of Eradicus in the form of ghosts of Woo-Foo ancestors, who is convincing to gather the pieces of a powerful armor to avoid the destruction of the world but who instead has the power to awaken the male. He is defeated again by the three protagonists and the new Woo-Foo army unites forming a much more imminent aura.

He is a huge griffin with strong narcissistic traits and a striking aversion to state-of-the-art technology (since he comes from an earlier era, he lacks the technical knowledge and experience). Eradicus loves overly loud polka music and doesn't understand why people today find this music cheesy and annoying rather than scary and intimidating. Added to this is his overconfidence, with which he often ruins his evil plans himself before he can actually carry them out.

Was once the Ancient Master of Darkness, enemy of Ti and Chai. He is in fact the first and original Night Master. After his demise (of unknown cause), other beings of darkness took on the mantle of evil he left behind including an unknown snake lady and the bat-creature Yin and Yang faced in season 1.

The Dangerous Comic Book of Dread

Eradicus appears in the online game created by Jetix, as the final boss and the arena where the fight takes place is in the past. 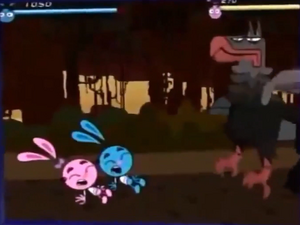 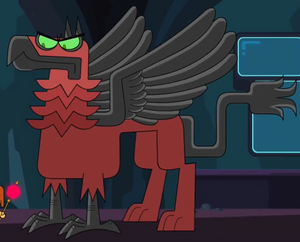 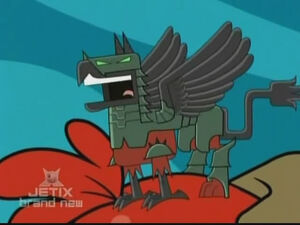 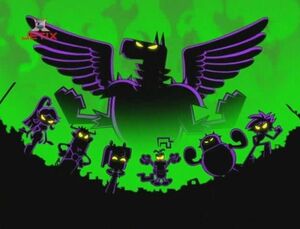 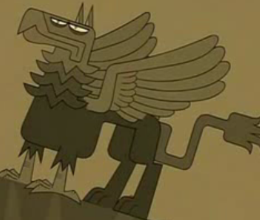 Eradicus, back when he was the original Night Master. 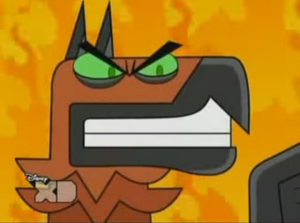 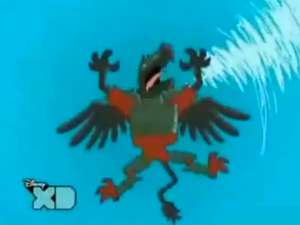