To devour everyone's shadows to give him strength (failed).

Power-Hungry Demon
Erebus is one of the antagonists in the G1 series My Little Pony N' Friends. He appears as the main antagonist in the four-part Season 1 episode "Bright Lights".

It's unknown who he was voiced by, though many think it was an uncredited Jim Cummings.

Erebus is a malevolent Cloud Demon whose intention is to devour everyone's shadows to make himself more powerful. He met Knightshade in the village Grayvale one day and promised he will boost his career and make him a star.

The demon indeed drew almost the entire village to Knightshade's next concert, stealing all of their shadows, including that of Night Shade's mother, and used them to turn himself into a powerful cloud of magic.

Since then, Knightshade has toured to increasing success, stealing ever more shadows for Erebus, hoping to keep his own shadow long enough to figure out a way to stop Erebus. While hunting for shadows, Erebus calls to Megan to come out of hiding, and she steps up, announcing that she has a surprise for him.

A vast army of Flutter Ponies, brought by Molly and Lofty, fills the skies, circling Erebus and blasting him with their Utter Flutter. Unable to withstand the onslaught, Erebus grows smaller and smaller, and the shadows he contains fly out, seeking their original owners, both he and Zeb were placed in prison.

Erebus is among the most ruthless and cunning of the MLP villains in Generation 1. He sees almost every other being as nothing but food, thinking about their tasty shadows whenever he sees someone new. He has consumed several villages' worth of shadows and weakened its citizens, ruining their lives, though he could care less, and in fact, quite the opposite, he enjoys the havoc that he wreaks.

He promised Knightshade he would make him a star and succeeded, using the singer's popularity to his advantage to siphon the shadows from anyone who came to his concerts, even children.

His minions were extremely loyal to him but whenever they made a mistake or failed at a task, Erebus didn't mind kicking them around for their failures.

Genius Intelligence: It was potentially him who invented the magic satchel which is able to steal other creatures' shadows.

Shadow/Magic/Soul Absorption and Corruption: With the exception of Knightshade's mother, everyone who had their shadows stolen by Erebus became bitter (and skinny and weak), almost as if their souls, emotions and general strength had been stripped off their bodies, which is more or less what is implied.

Atmokinesis: As an elemental creature, Erebus possesses the power to control the weather as he pleases, from creating small tornadoes and blowing powerful currents with his breath to shooting lightning bolts from his fingertips.

Shapeshifting: Being a living cloud, Erebus can make himself solid or gaseous at will or morph into various forms (and even develop a foot) and fit through any gap, as well as darken his cloudish appearance so that it looks as though he's wearing a robe. Additionally, he grows bigger the more shadows he consumes.

Magic Mirror: Erebus possessed a magic mirror in his mansion, from which he can observe events going on outside or communicate with his minions.

Erebus had four henchmen (not counting Knightshade), one being Zeb, an anthropomorphic Zebra, and the other three being rat thugs from a mice village Erebus already stole shadows from, who worked under Zeb as well.

Zeb acted as Knightshade's manager according to Erebus' plan, who had put him there to steal shadows from him while he stayed at his mansion, a task he carried without second thought, unlike Knightshade, as Zeb was nearly as despicable as Erebus himself. The rat thugs chased after the ponies and captured them when they tried to escape. They were all captured and imprisoned by the people of Grayvale and the Flutter Ponies after Erebus was defeated. 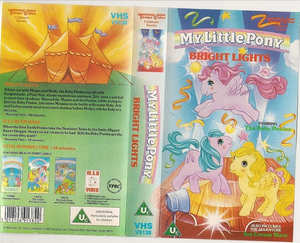 His name is Erebus, not "Arabus" 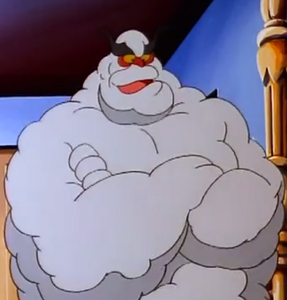 Erebus toys with his shadowy meals 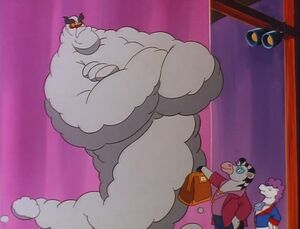 Erebus in his final, large state 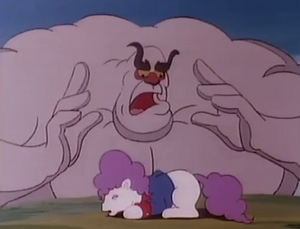 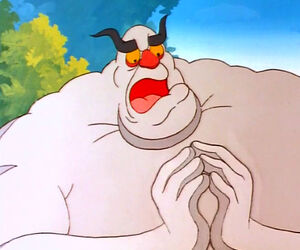 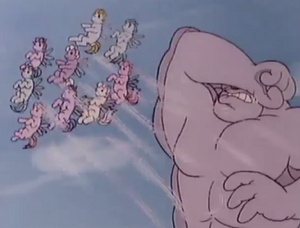 Erebus vs. the Flutter Ponies

Erebus' mansion, atop a hill overlooking a village 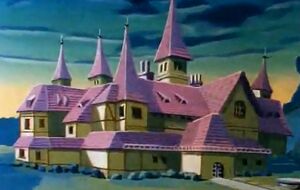 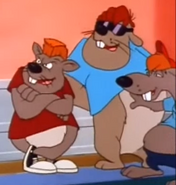 The rats wait outside of their master's room

The rats are rounded up 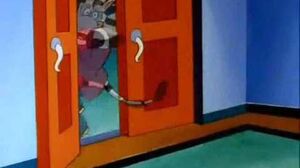 G1 Songs- Nothing Quite Like Shadows
Arabus's and Zeb's Villain Song