King of The Wild Hunt

King of the Aen Elle Elves

Kidnapping people and making them riders of the Hunt.

Built an army powerful enough to fight against his enemies, the Wild Hunt.
Found a new city for them to live and establish, Tir ná Lia.
Exterminate all humans in his world.
Travel from world to world to kidnap and enslave humans to turn into soldiers of the Wild Hunt.
Become the new king of the Aen Elle elves by killing Auberon and usurping his throne (all succeeded).
Harness the power of Ciri's elder blood.
Kill Geralt (both failed).

After murdering his king Auberon Muircetach, Eredin seized the throne for himself and became king of the Aen Elle. With his elite cavalry Dearg Ruadhri  - better known as the Wild Hunt - he was feared among the humans as he travelled between the worlds and kidnapped people to serve as slaves.

After his world faced extinction because of the White Cold, Eredin decided to conquer the world of Geralt. In order to launch a full invasion, however, he needed Ciri and thus started to track her down.

He was voiced by Steven Hartley.

Eredin was first seen in the Witcher video game series as a ghostly projection constantly haunting Geralt of his past failures whether it be listing the people he has killed and twisting the truth of past events, Geralt recognized Eredin as he rode with the Wild Hunt as one of their riders before escaping and succumbing to amnesia. Geralt knew he had to defeat this evil if anyone was to ever be safe so he did research on how to defeat the wraith however he soon discovered that the Wild Hunt were in fact inter-dimensional elves and not wraiths at all which would explain as to why the riders of the Hunt fell victim to his silver sword from previous encounters with them (as wraiths could not be killed only driven away).

Geralt saw Eredin once shortly after defeating the Grand-master of the eternal fire Jacque de Aldersberg with Eredin requesting the soul of the grandmaster himself, despite not knowing the reason Geralt still felt compelled to deny the King this request which angered Eredin causing a brief fight to occur ending with Geralt being able to drive off his foe causing Eredin to retreat from the battle. Eredin was defeated but Geralt knew the peace wouldn't last long.

The Witcher 2: Assassins of Kings

Eredin and the Wild Hunt were not a direct threat for Geralt and his quest only being mentioned as a great threat which will soon plague the land in eternal frost. The Wild Hunt also appeared in flashbacks of Geralt's past which revealed to him that they kidnapped his lover Yennefer after Geralt was resurrected from death and retired from the lifestyle of a Witcher and this caused Geralt to get back on the Witcher's path to search for Eredin and the Hunt and get Yennefer back.

Geralt tracked the Wild Hunt across the country coming across villagers effected by the Hunt where they would take young citizens from their families for unknown reasons, while searching for them he came across fellow witcher Letho for the first time and saved his life from a monsterous slyzard, together traveled to search for the Hunt before catching up with them at the Hanged Man's Tree where a battle ensued that they could not win for there were simply too many of them.

Geralt made a deal to Eredin: His life for Yennefer's to which Eredin agreed to immediatly, Geralt charged Letho to look after Yennefer and rode off with the Hunt eventually leading to his escape from the Hunt and suffering of amnesia.

Eredin and the Hunt return as the main antagonists, besides the riders of the Hunt themselves Eredin is aided by his three generals: The ruthless warrior Imlerith, the powerful mage Caranthir and the cunning strategist Ge'els. together they seek the elder blood of Geralt's adopted daughter Ciri to save their homeland which takes them across dimensions searching for her before she manages to find her way back to Geralt which also brings the Wild Hunt back to him as well.

When Geralt finally manages to track down his lover Yennefer of Vengeberg to his surprise she is accompanied by a fully armored Nilfgaardian escort, however their reunion was short lived as the Wild Hunt rode in and ambushed them completely annihilating the entire escort in the process, Geralt and Yennefer were the only survivors. The sudden appearance of the hunt shocked both of them as they were unaware how they found them.

Later as Geralt went to a village to meet an informant who had information of Ciri he discovered that the entire village was completely abandoned with a mysterious frost covering the land. Geralt found a sole survivor who revealed to him that the hunt lead by Eredin himself raided the village and took everyone including his daughter, Geralt suspected this was because they wished to take them back to their homeworld as slaves. The survivor told Geralt that besides himself there was another villager they didn't take but instead brutally killed as he heard terrible screams coming from his hut but he did not know why, Geralt found out that the villager they killed was in fact the very same informant he was supposed to meet but somehow Eredin found out about him first and tortured him on Ciri's whereabouts before killing him, fearing that the informant spilled the beans to Eredin he left to search for Ciri immediately worrying he might already be too late.

As Geralt was searching for Ciri based on eye witness accounts he managed to find her last known location however instead of finding evidence of Ciri, his investigation led him to a strange deformed creature calling itself Uma. Convinced the creature knew where Ciri might be and even suspecting the creature to be Ciri herself he decided to take it back to his Witcher fortress Kaer Morhen. There with the help of his friends he manage to revert Uma to his true form which was not Ciri but instead a mysterious elven mage named Avallac'h who revealed he was helping Ciri on her journey but was cursed into becoming Uma by Eredin when he would not reveal Ciri's location to the latter, he however told Geralt of Ciri's hiding place on the Isle of Mists but warned him that as soon as he finds her the wild hunt would know, however Geralt ignored his warnings and went out to search for her.

After finally finding Ciri and having a heartwarming reunion with her they both knew that the hunt would find them soon, tired of running from Eredin, they decided to stand their ground at Kaer Morhen. Geralt along with Ciri and other friends prepared for the inevitable battle with the Wild Hunt, and after a long drawn out fight and despite their efforts, the Hunt spear headed by Eredin himself breached the walls of Kaer Morhen and killed Vesemir, close friend and father figure to Geralt and Ciri. Overcome with guilt and grief Ciri lost control of her powers and let out and incredibly loud and powerful scream which acted as a hurricane which almost tore apart Kaer Morhen as well as killing several members of the Hunt and incapacitating Eredin, the Wild Hunt had no choice but to flee via a portal, however Ciri's powers still raged on leading to Avallac'h having to siphon Ciri's powers in order to get it under control.

Angry over Vesemir's death Geralt and Ciri decided to go to an annual event that the Crones were hosting, and kill Imlerith (one of Eredin's most trusted lieutenants and the one directly responsible for the death of Vesemir), as the guest of honor was Imlerith himself effectively dealing a heavy blow to Eredin's army. Avallach and Geralt then traveled to Eredin's homeworld Tir ná Lia as an attempt to turn one of his generals Ge'els against him, he was hesitant at first however he quickly joined their side after Avallac'h revealed to him Eredin was a regicide and usurped the throne from the original king Auberon Muircetach after poisoning him. In return Ge'els assured them that Eredin would no longer have reinforcements coming from his homeland.

The Wild Hunt's flagship, the Nagalfr, was later drawn to Skellige by Ciri through use of the Sunstone. The Hunt was caught in a trap, with the Lodge of Sorceresses preventing them from teleporting and the Nilfgaardian navy blocking them by sea, and the Hunt were forced to contend with both Nilfgaardians and Skelligers. Caranthir's (Powerful mage of the hunt and Eredin's second lieutenant) magic initially froze the opposition, until Ciri broke his staff, enabling Geralt to slay him. Geralt's next target was Eredin himself and witnessed Eredin personally facing off against Crach an Craite (the Jarl of Ard Skellige). Wounding the jarl, he tossed him his battle axe and asked if he had any final words. Crach refused to oblige him and lunged to attack only to be cut down.

Geralt and Eredin engaged in a long drawn out battle ending with Geralt gouging out Eredin's left eye and slicing his solar plex. As Eredin laid dying, he revealed that Avallac'h had deceived the both of them, and had fled with Ciri. Geralt refused to believe him, as Eredin, the King of the Wild Hunt, expired. 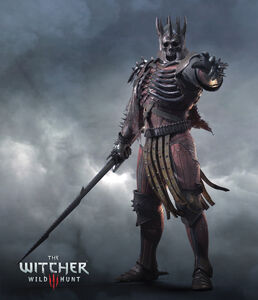 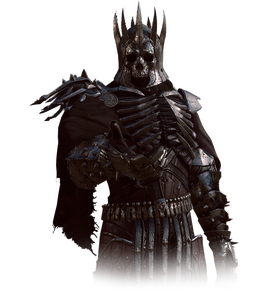 Eredin's picture for his journal entry. 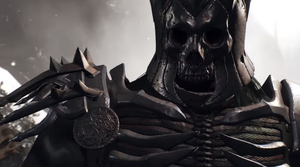 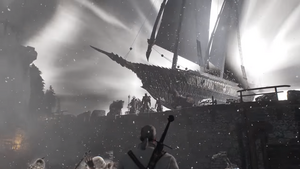 The Wild Hunt arrives at Kaer Morhen in a dream of Geralt. 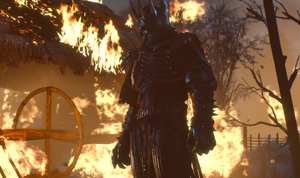 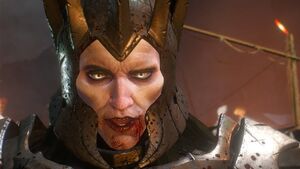 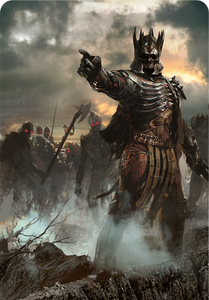 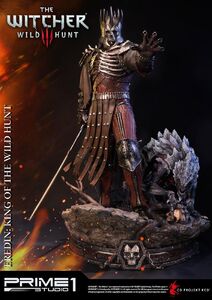