Access his father's basement and learn its secrets (succeeded).


Free Paradis from the Pure Titans (succeeded).
Manipulate his half-brother into trusting him (failed) and use him (succeeded).
Get his father to kill the Reiss Family and steal the Coordinate (succeeded).
Stop Zeke's "Euthanasia" plan (succeeded).
Awaken the Wall Titans and initiate the Rumbling (succeeded).
Capture, eat or kill Marley's Warriors and take their Titans if possible (ongoing).
Repel Marley's assault on Shiganshina (ongoing).
End the Titan War by defeating the Marleyan forces once and for all (ongoing).

Eren Yeager is the main protagonist of the Attack on Titan series. He is a former member of the Survey Corps, the leader of the Yeagerists, the current inheritor of the Attack Titan and later revealed to be the Founding Titan as well. Recently, he has become the inheritor of the War Hammer Titan. He serves as Reiner Braun's archenemy and is the half-brother of Zeke Yeager.

While initially presented as a heroic protagonist, Eren gradually becomes more of an antagonistic anti-hero to a dangerous villain, threatening to undermine the national security of Eldia in the face of an impending war against the world due to his assertive and arbitrary actions, as he commits numerous villainous acts. Most notably is the Marley Arc, where he serves as the main antagonist.

From the Marleyan perspective, he is a genocidal terrorist who wishes to eradicate them, serving as a threat since he can control the Wall Titans without being bound by King Fritz' vow of pacifism.

He is voiced by Yūki Kaji in the Japanese dub of the anime, and Bryce Papenbrook in the English dub.

As a human, Eren has an average male physique. He has short brown hair and his eyes appear to have a turquoise coloring to them. During his time in the 104th Training and Survey Corps, Eren has gained more of a muscular built. Although this is hardly seen, due to the amount of clothing he wears.

After the time skip, Eren has noticeably changed drastically. He has gotten slightly taller and has grown out his hair to a longer length, as well as gained facial hair. He overall resembles his father, Grisha Yeager.

In his Titan form, Eren stands at 15 m. He displays hair long enough to reach to his shoulders and pointed ears. His most interesting features are his teeth, which appear to be formed a jagged shape, displayed outside of his face reaching to his side cheeks with no lips to cover them. Like some of other Nine Titans, Eren's Titan form displays a muscular, humanoid appearance, albeit with no unique features.

When Eren was a mindless Titan, he had a very short appearance with a big head, short arms and legs. His overall appearance was a mixture between his human self and his Attack Titan with his regular hair carrying over, but his jagged teeth, pointed teeth and crooked nose also carrying over.

He is a young man that can be described as being fearless. He was dedicated to both his friends, family and people and very determined to achieve his goals of freeing the world from the Walls. Even as a child, he was always eager to want to join the Survey Corps, for the sake of escaping the Walls and exploring the outside world. This strong yearning for freedom and his dedication to his comrades were Eren's greatest strength and assets.

Because of his strong dedication, however, this can often lead to his obstinate arrogance which ultimately can lead to him making reckless mistakes and decisions that put him, his friends and later the nation which he is supposed to protect, in great danger. During his life as a trainee sent hastily to fight Titans his recklessness claimed lives of his teammates, saving Armin Arlelt. He also tends to have a short temper and can often lash out in anger out of nowhere. His anger can rise to brutal levels, as shown when Eren, even though Armin initiated the fight, pounced Armin to a bloody pulp in spite of knowing that Armin was no match for him, going far beyond simple subjugation or restraint. He claimed that he wanted to do Reiner and Bertolt serious bodily harm and to kill them in the most sufferable ways as possible, after learning they were the Armored and Colossal Titans.

When Eren learns the truth about the world and the Titans, he changes quite drastically. His hatred for the Titans has disappeared and has now taken on a calm and more serious approach. He has fully acknowledged Marley as the true enemy and will go out of his way to stop them, even if it means going out of his way to commit horrid acts such as killing innocent bystanders and causing collateral damage.

However, due to committing such arbitrary actions, his relationship with both his friends and comrades have shattered, with most of them having become either hostile or disappointed towards Eren due to the heinous actions he committed in Marley and putting the lives of the Survey Corps in danger, with some of them going as far as wanting him dead, such as Connie and Jean, who blame him for Sasha Braus' death, with the former claiming that when he learned of her death, he laughed and that he showed no remorse to her passing, while also saying that he won't hesitate in killing him himself if there's a need to, as well as his former best friend Armin, who admits that he doesn't understand him anymore, and suggests that they should kill him if necessary if he does switch alliances, or have someone else transform into a Titan and obtain Eren's powers before the end of his tenure. Eventually, in Chapter 112, after a heated confrontation that culminated in their friendship taking an even severe blow, Armin and Eren came to open exchange of physical blows at one another after Eren chastised both him and Mikasa. Eren told of his hatred towards Mikasa, viewing her as an obedient slave that only follows orders as part of her instincts as an Ackerman, causing Mikasa to break down in tears, crying over how the one person that she's cared for her entire life would say such things. He then called Armin a useless traitor that was being influenced by the enemy and Bertolt's memories. Enraged at Eren's harsh words, Armin lunged at Eren, punching him the face, but it didn't faze Eren at all, who easily beat down Armin. After joining and fully committing to the Yeagerists, Eren severed all ties with his friends and the military, now viewing them as the enemy. Only when Jean voiced his suspicion of Eren's true motive behind his exterior act of betrayal, Armin was snapped awake from his profound disappointment towards his old friend-turned-enemy, preventing their still-remaining friendship from totally collapsing. But even so, the irreparable damage had already been done.

Due to his change of personality, Eren has been able to express his relationship with even his enemies. Most notably is Reiner Braun, who, despite committing heinous actions that Eren despises him for, was able to relate with him as both him and Reiner are essentially trying to achieve the same goal. However, unlike Reiner who has matured to the point of doubting what he stood for and wrecked with full of remorse and guilt over everything he had done, Eren, in spite his action plunging himself and everyone around him into potential self-destruction, stubbornly believes what he does is righteous.

Eren was born on March 30th, 835 as the only son of Grisha and Carla Yeager. As he grew up, he eventually met Armin Arlert, who would become his best friend. Armin's dream of leaving the Walls and reaching to places they could never go to like the ocean-inspired Eren of developing the same goal of escaping the Walls. The two were often picked on by bullies in the neighborhood, mainly due to her goals that were believed to be ridiculous.

At the age of nine, Eren and his father visited the Ackerman household where his father had arranged a medical appointment with them, but when they arrived, they found the house to be left in a bloody state, as both Mr. and Mrs. Ackerman was found murdered. While Grisha stayed behind, Eren followed off to where the murderers had gone to. He soon discovered their hideout, where he had come across a group of human traffickers that kidnapped a young girl named Mikasa Ackerman. Eren tricked one of the men into thinking he was lost, before murdering him. He then proceeded to murder the second man but was caught by the third man. The man was ready to kill him until Mikasa lashed out and stabbed the man.

Eren and Mikasa eventually left the house, where they were soon discovered by Grisha Yeager. With nowhere left to go, Grisha offered Mikasa to stay by his place. Eren accepted her and in return, gave her his scarf to keep her warm and comforted.

Powers of the Nine Titans

In general, Eren Yeager has access to the basic power and abilities of a Titan. Having access to the Attack, Founding and War Hammer Titans, however, Eren also has special abilities granted from these three Titans.

The Attack Titan enters a berserker rage in the Anime

Eren disguises himself as a traumatized soldier named "Kruger" in Liberio 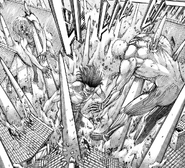 Eren is shot and beheaded by Gabi Braun 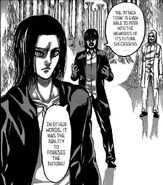 Eren declares Ymir a human being and free to choose her own fate. Touched by his words, Ymir grants Eren the full power of the Founder.

Eren survives from his beheading, initiates the Rumbling and turns into the Founding Titan
Add a photo to this gallery

Retrieved from "https://villains.fandom.com/wiki/Eren_Yeager?oldid=3349518"
Community content is available under CC-BY-SA unless otherwise noted.