Kim Possible: So The Drama

Eric, also known as Synthodrone #901, is the secondary antagonist of Kim Possible: So the Drama.

He was voiced by Ricky Ullman of Phil of the Future fame.

Eric is one of Dr. Drakken's synthodrones, robotic creations designed to generally replace henchmen but was not widely used due to fragility. Unlike most synthodrones which were emotionless and mindless cannon fodder, Eric was designed to act as an infiltrator. To this effect, he was equipped for mimicking a human near perfectly and had a very convincing human face. Like most synthodrones, he was strong (and in his case, agile) but fragile, a simple hole large enough to spill synthogoo being all it was required to destroy him.

Most poignantly, Eric represented what Drakken was capable of when at the top of his game in evil villainy. Drakken knew his nemesis Kim Possible was a teenage girl, and as such had insecurities involving boys and dating. Being designed in Drakken's words to be a "made to order snytho-hottie", Eric was able to win Kim's affection and love with stunning swiftness, creating a rift between her and Ron. This was ironic as separating Team Possible was another successful tactic used by Shego during the events of A Sitch in Time. Eric's ability to keep Kim focused on him and the Prom managed to keep her from looking at Drakken's plot entering motion until Ron brought it to her attention and Wade verified it. Because of this, Drakken arranged for Eric to be "kidnapped" by Shego so he could use the seed he'd planted to good use. Thanks to the relationship between the two, Drakken was able to lure Kim into his trap. After Kim played her cards defeating Shego, Eric was "released" and knocked Kim out with an electric taser built into him, capturing her and revealing his true colors.

Present for Drakken's gloating to Shego, he would see Kim and Ron's entrance into the control room and her subsequent haymaker punch at Drakken. In the ensuing battle, he dueled Ron Stoppable and gained a reliable upper hand against the sidekick. However, he would be destroyed in the battle's climax by Rufus, dropping the Electromagnetic Scrambler charge that Kim had fired at Drakken's control tower as Rufus bit a hole into his leg. What remained of Eric was presumably obliterated when the tower collapsed just a minute later.

In considerable irony, he had become the one who pushed Kim and Ron into becoming a couple despite his entire purpose being to lure Kim's affections towards him. His actions to brutally exploit one of Kim's weaknesses had also closed that avenue as her stable relationship with Ron helped her insecurities in regards to dating. Also notable is the fact that he is the first named character to properly die in the series instead of being just beaten and locked up. Synthodrone or not, he was a character who was killed. Only three other characters had a fate remotely like this. Monkey Fist was turned to stone, while Warhok and Warmonga were killed by Ron's hands. 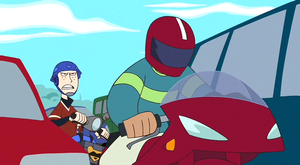 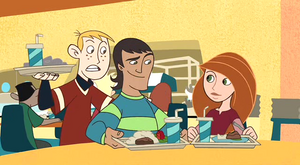 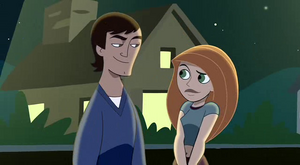 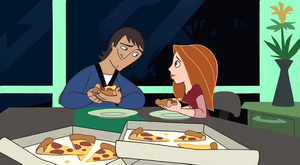 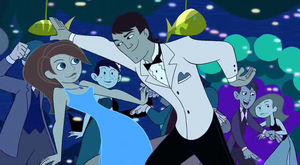 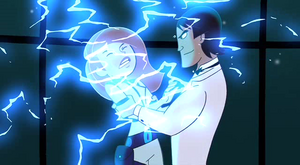 Eric revealing his true nature to Kim as he tasers her unconscious. 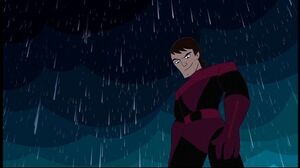 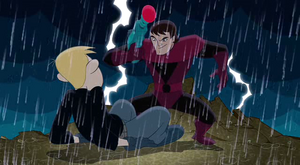 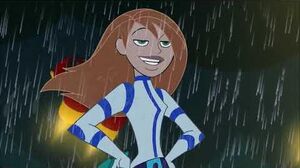 Retrieved from "https://villains.fandom.com/wiki/Eric_(Kim_Possible)?oldid=3989961"
Community content is available under CC-BY-SA unless otherwise noted.