Stop Billy from taking charge of the hotel.

Eric Gordon is the main antagonist of the 1995 comedy film Billy Madison.

He was portrayed by Bradley Whitford, who also played Steve Hadley in The Cabin in the Woods, Dean Armitage in Get Out and Agent Sieve in Infinity Train.

One day, Billy ruins a dinner meeting between his father, Brian, and his associates by acting obnoxiously after being intimidated by Eric. This prompts Brian to lose any remaining faith in Billy, as he chooses the conniving Eric to become the next CEO of the company, since Brian is retiring from his company. When Billy protests that he can be responsible, Brian reveals that he secretly bribed all of Billy's school teachers in order for him to pass. Billy, who despises Eric, begs his father to reconsider his decision. The two finally come to a compromise. Billy must pass elementary, middle, and high school (grades 1-12) on his own within the course of twenty-four weeks (two weeks per grade), in order to prove his competence. Additionally, Billy will retake the exams and he will re-graduate by himself and he will take over the company.

Shortly after enrolling into school, Billy becomes attracted to a third grade teacher named Veronica Vaughn, who initially is disgusted with Billy and finds his enrollment to be a distraction for the other students. He eventually finds himself as one of Vaughn's students and earns her respect by defending Ernie, his friend and classmate. Billy becomes popular among the third graders and begins to miss them as he advances through school.

Billy's good progress frustrates and alarms Eric, leading him to take the offensive while Billy struggles in high school. He visits Billy's grade school principal, Max Anderson, and threatens to reveal his past as a professional wrestler. Back in 1983, Max accidentally caused the death of another man while performing a stunt. Coerced, Max publicly states he took bribes from Billy in return for passing him. The announcement angers Brian who chooses to give the hotel chain to Eric. Billy becomes distraught and reverts to his original carefree lifestyle. Veronica and others come to Billy's aid, convincing him to keep fighting Eric. He returns to school and begins to study again; however, Billy realizes that he must reclaim the hotel chain. His grade school friends visit Max at his home and convince him to retract his accusations in public, much to Eric's anger.

With Billy's name cleared, Eric is confronted by Billy and Brian for blackmailing Max, with Brian stating that Eric no longer deserves the company and adding that Billy deserves another chance. Despite this, Eric refuses to back down and threatens to file a lawsuit unless Brian hands over the company. To spare his father from getting a lawsuit, Billy suggests challenging Eric to an academic decathlon that will determine his father's successor, and the winner will run the hotel. Finding this to be amusing, Eric accepts the challenge. Although both men excel in different activities, Billy manages to take a single-point lead before the contest's final event, a Jeopardy!-style academic test. The game progresses as Eric is given the chance to answer and potentially win. However, he is asked to answer a question about business ethics (which he has no concept about, due to being a corrupt and unethical business man) and begins to break down, before brandishing a revolver and firing it into the air (scaring the audience). Eric then holds the game show host at gunpoint, demanding a new question. Billy then tells Eric to calm down, and that he (the latter) blew it, so he loses. Eric, insulted, points the gun at Billy, deciding if he can't have the company, neither should Billy. Then, Max, clad in his wrestling outfit, attempts to subdue Eric by slamming him down, but the attack fails to keep Eric down and he makes a final attempt to get revenge on Billy by turning his gun on Veronica. Fortunately, a rifle-wielding madman, Danny McGrath, whom Billy apologized to earlier in the film for bullying in school, saves both Billy and Veronica by firing a single shot into Eric's buttocks, knocking him out.

Eric is last seen during Billy's graduation ceremony, now using leg crutches to recuperate his butt wounds. At that point, Billy announced that's he planning to go to college to become a teacher and hands over the hotel business to Brian's loyal employee Carl Alphonse. Everyone cheers for this, except for Eric, who is very upset that he will never have the hotel business to himself. Eric is then last seen walking away in defeat as the spectators applaud for Billy for his decision. It is unknown what happened to Eric afterwards, though it may be likely that he gets fired or arrested for his actions. 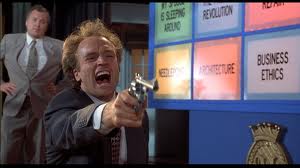