The House on Sorority Row

Kill the people that killed his mother (succeeded).

Eric Slater is the main antagonist of the 1983 slasher film The House on Sorority Row. He is the son of sorority house mother, Dorothy Slater, who had him through an illegal experimental pregnancy. After witnessing his mother's death from the attic of the sorority house, Eric goes on a killing spree in order to avenge his mother.

He was portrayed by Charles Serio.

Eric was born on June 19, 1961 to his mother, Mrs. Dorothy Slater, as a result of an illegal experimental artificial pregnancy by a doctor named Nelson Beck. Due to the artificial pregnancy, he was born with both physical and mental deformities but his mother still cared for him dearly as she managed to raise him.

Although he spent most of his life in a clinic, Dorothy, being a sorority house mother, would bring him to her sorority house when the Sororities would leave after their college years had ended days and the house was left to them over the summertime each year while he stayed in his attic room; allowing them to celebrate his birthday.

However, one day before his 24th birthday, some sorority sisters (Katey, Vicki, Diane, Liz, Stevie, Morgan, and Jeannie) decide to stay behind in the Sorority home for a few days to celebrate their graduation. Wanting the house to herself for Eric's birthday, Dorothy is against this and orders them to leave; making a point by slashing Vicki's waterbed with her trademark cane while she makes love with her boyfriend.

The next day in his attic room, Eric witnesses the Sorority sisters playing a prank on Dorothy with Vicki's gun that appears to shoot blanks and uses it to force her into the backyard pool until it goes horribly awry as Vicki accidentally kills her with an actual bullet in the gun and she falls into the water.

Infuriated by his mother's death, Eric snaps and retrieves Dorothy's body and cane by storing it within the attic. That night, as the party begins in the house, he sets into action as he first kills a party-goer near the pool by stabbing him through the throat and proceeds to ambush Stevie in the basement and kills her by stabbing her repeatedly with the cane.

Next, he murders Morgan on her balcony as he uses his jack-in-the-box toy as a lure to where he stabs from behind with the cane and stalks the remaining sorority sisters, who find Dorothy's body before trying to move it to a cemetery. As Diane waits for the others in her van, Eric stabs her through the sunroof and hides her body

Eric then attacks Jeannie, who escapes for a while before he comes after her again and corners her in a bathroom stall. As he turns on the showers to create a concealing steam, he searches the stalls until he finds her before using a butcher knife she armed herself with to stab her in the throat; decapitating her and leaving her head in the toilet.

After leaving Diane, Morgan, and Stevie's bodies in the pool, he follows Liz and Vicki to the cemetery where he sneaks upon the former and slits her throat. Finally, he proceeds to ultimately avenge Dorothy by cornering Vicki at the van and strikes her down with the cane before finishing her with a stab to the eye.

He returns to the house to find Katey and Dr. Beck, who intends to capture him with a tranquilizer to avoid anyone learning of him as that would expose his hand in his deformities. Upon seeing Katey's date, Peter, coming in, he let Dr. Beck waste the tranquilizer on him. Eric then attacks him and sends falling to his death over the stairway before turning his sights on Katey.

A traumatized Katey climbs up into the attic and is attacked by Eric, who is wearing a clown costume. As Eric approaches her, Katey seemingly kills Eric by stabbing him multiple times with a pin sticking out of a doll's neck, and he falls through the attic hatch to the floor below. Katey peers down and, believing that he is dead, she becomes relieved. However, Eric was only stunned, as he opens his eyes before the film ends. This ultimately leaves whether or not he kills Katey ambiguous. 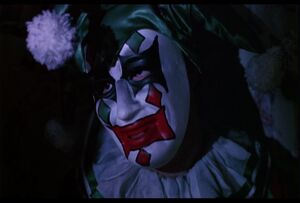 Add a photo to this gallery
Retrieved from "https://villains.fandom.com/wiki/Eric_Slater?oldid=3702361"
Community content is available under CC-BY-SA unless otherwise noted.