Take Holly on a date.

Eric Summers, also known as Superboy, was a student at Smallville High School, a metahuman and schoolmate of Clark Kent who leeched his powers when they were both struck by lightning while he held a meteor rock.

He was portrayed by Shawn Ashmore, who also portrays Lamplighter in Amazon's The Boys.

Initially Eric displayed a shy and quiet persona as well as an admiration for fellow classmate Molly. After absorbing Clark's powers he became far more confident and was evidently pleased by the plethora of praise he received for recovering Chloe's laptop.

However his mother and father's fear and aggression sparked a deep seated anger which led to Eric terrorizing fellow students and even attempting to kill Clark.

By the time of his next appearance in "Asylum", Eric's psychological state had worsened as it was obvious he was embittered against Clark for his incarceration but also he seemed to have become obsessed with restoring "his" powers.

Eric's killing of his friend Ian revealed that during his "stay" in Belle Reve, his aggressive feelings had turned him homicidal.

Eric was a quiet, shy student at Smallville High who had a crush on a beautiful blond girl named Holly. He was taking a geology class taught by his overbearing, verbally-abusive father.

During a field trip, Eric wandered away standing on the edge of a dam, potentially contemplating suicide. Clark found him throwing meteor stones and listening to music with headphones, when the protector barrier was shocked by a lightning, and Eric fell down. Clark grabbed him as he fell, but was struck by lightning at the same time.

Eric was holding a bag with a meteor rock in it, and Clark's Kryptonian powers were transferred to him.

The next day, Eric discovered he didn't need his glasses now and used his new powers far more openly than Clark ever did. When he thwarted a purse-snatcher, Chloe gave him the nickname "Super Boy" in her first byline in the Ledger Smallville Ledger. However, Eric soon became violent and unpredictable.

His father wanted him to submit to tests; his mother was afraid of him; and Holly rejected him. At school, Eric confronted Holly, a girl he had a crush on, and attacked her boyfriend. Clark stepped in to stop him from attacking Holly's boyfriend, Brent.

Eric threw him thirty feet, and Clark had to go to the hospital to have his ribs bandaged. When the sheriff came to question him regarding the incident, he tore the street apart in a rage.

Clark realized that, unlike himself, Eric did not have a supportive family and thus could not handle the responsibility to handle his powers, and thus sought to reclaim them. Clark guessed that if Eric had his abilities, he also had his weaknesses.

He asked to borrow Lana Lang's meteor rock necklace in an attempt to subdue Eric. As Clark attacked Eric with the necklace, Eric attacked Clark with a live power line. The resulting bolt of electricity mixed with the necklace reversed the original process and Eric was taken to Belle Reve.

Almost three years later, Clark met Eric again while he was on his way to see Lex, after his friend was committed to Belle Reve.

After Eric was taken to Belle Reve, he befriended two of Clark's old foes; Ian Randall, a boy who could replicate himself, and Van McNulty, a boy who tried to kill everyone who had been given a superpower by the meteor rocks.

Ian and Eric approach Van and offer to break him out if he tells them what Clark's weakness is. The plan is for Eric to leech his powers again. Van pays a guard to smuggle in a meteor rock.

The three of them worked together to defeat Clark when Clark broke into Belle Reeve in an attempt to rescue Lex. McNulty provided the meteor rock, which Ian used it to subdue Clark, and Eric leeched Clark's powers again using a power cable.

When Eric attacked Ian, killing him in the process, Clark recovered and subdued Eric, using the same meteor rock that had been used against him to restore his powers. 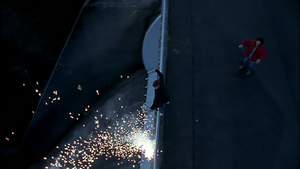 Eric stood on the edge of a dam, when the protector barrier was shocked by a lightning. 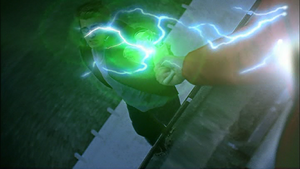 Eric held a bag with a meteor rock in it and Clark's Kryptonian powers were transferred to him.