Killing Fluffy and Uranus over and over.

Kill Fluffy and Uranus repeatedly for annoying him (succeeded/failed due to them being immortal).

Eric Tiberius Duckman (also known as Duckman) is the titular main protagonist of the TV show with the same name Duckman.

He was voiced by Jason Alexander, who also portrayed Philip Stuckey in Pretty Woman, Henry Grace in Criminal Minds, Zutho in The Legend of Tarzan, Catbert in Dilbert, and Abis Mal in Aladdin: The Return of Jafar and the Aladdin TV series.

Duckman is a perverted, lazy, selfish, abusive, and incompetent duck who works as a detective, along with his best friend Cornfed. He is also very neglectful to his kids as he does take them for granted and sometimes want nothing to do with them, but he honestly loves them nonetheless.

He is also pretty abusive to his stuffed-bear assistants, Fluffy and Uranus, as he constantly gets annoyed by their kind demeanor, political correctness, and trying to make him into a better person, and he often retaliates by murdering them however way he can, but they are immortal and come back in the next episode fine.

He is also very depressed about his deceased wife, Beatrice, which is why he is so angry, grumpy, and grouchy. In the series finale, it was revealed that Beatrice was alive the entire time and Cornfed didn't tell him for unknown reasons. 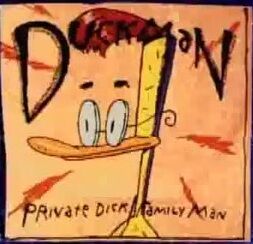 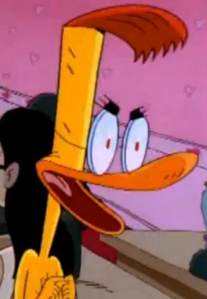