Enforcing the tyranny of Jark Matter.

Oppressor
Eriedrone is a member of the Space Shogunate Jark Matter holding the rank of Karo and serving as the guardian of the Sagittarius system. He is a supporting antagonist in Uchu Sentai Kyuranger.

Eriedrone oversaw Jark Matter's invasion and subjugation of the planet Crotus. However, his forces failed to prevent the initial three Kyurangers from helping many civilians escape. As Eriedrone contacted Don Armage to inform him of the invasion's success, the Shogun blasted Eriedrone and ordered him to eliminate the insurgents.

After discovering Stinger attacking the other Kyurangers on the planet Needle, Eriedrone opted to recruit him into Jark Matter

Eriedrone was later killed off by the Kyurangers after Stinger revealed his true allegiance and defected to the rebellion. 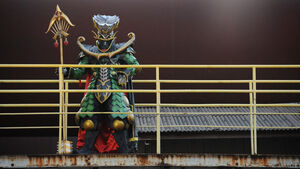 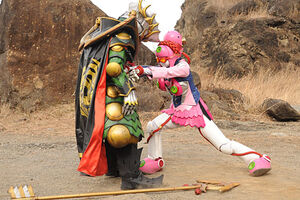