Use the Lullaby Spell and kill all the guild masters (failed).

Unite the clock parts of the Infinity Clock and plunge the world into an endless nightmare and bring about chaos and the apocalypse (formerly).

Erigor (in Japanese: エリゴール Erigōru) is one of the recurring antagonists in Fairy Tail, and the main antagonist of the Lullaby arc. He was the strongest member of the former Dark Guild Eisenwald and acted as its substitute leader in the absence of their imprisoned master. He became infamously known as the Death God (死神 Shinigami) due to being a Mage that only accepted assassination jobs. This epithet of him was supported by his weapon of choice, a scythe. Seven years later, Erigor escaped from imprisonment and became a member of the Reborn Oración Seis under the name of Grim Reaper (グリムリーパー Gurimu Rīpā).

He was voiced by Kōichi Tōchika in the Japanese version of the anime, and Jonathan Brooks in the English version.

Erigor is an extremely tall, lean-built and yet mildly muscular man with silver hair, which is held pointing upwards in spiky strands on top of his head, but hangs down to the left of his face in a distinctive tuft, sometimes partially covering it, and reaching down to his shoulders. His eyes are dark and he has an elongated face with sharp features and somewhat pointed ears, but seems to lack eyebrows. His eyes are circled by dark lines and each of them has a simple tattoo right below it, consisting of a pointed line going down vertically, crossed with two more, larger horizontal lines. The upper part of his body is similarly tattooed, but with much larger, intricated and blue-colored motifs, which take on spiraling forms, and adorn his shoulders, biceps, pectorals and back.

Erigor dons a torn Japanese-like outfit befitting his role as the Shinigami. He is shown bare-chested, with all of his tattoos visible, and his lower body is covered in different layers of clothing: he sports a long, worn skirt, reminiscent of a hakama, below a darker, shorter cloth, held up by an even lighter and shorter one tied like a belt. He has a black scarf wrapped around his thin neck, with its edges hanging on his back and traditional geta sandals on his feet. His attire is completed by a pair of distinctive dark gloves, each adorned by a light “X” on the back, and by bandages wrapped around his forearms.

Erigor is an unsympathetic and ruthless man who is known for having completed a large amount of assassination contracts despite the Magic Council having prohibited so, choosing money over people's lives. Erigor's most distinctive trait is his dislike for legal guilds, having been the author of the plan to eliminate the legal Guild Masters. He strongly believes that his guild was deprived of its rights by the legal guilds, and thinks that those who live without knowing about such "injustice" deserve death, a punishment which he, the Shinigami, must be the one to give. This also shows that he also takes great pride in the epithet he owns, having created his persona around it.

He doesn't seem to care much about his comrades, as he casually injures Kageyama when he doesn't get rid of Natsu Dragneel, and leaving all of his guild mates behind to fight the Mages from Fairy Tail. He has the tendency to refer to his enemies in an extremely opprobrious and derogatory way, calling them "flies", and he also appears to have a liking for dangerous artifacts, as he spends time praising the Lullaby and its destructive capabilities.

Erigor orders his guild members to secure Lullaby, a Magic death flute, so he can kill all the Guild Masters during their meeting. Kageyama returns with the flute as Erigor takes over a train, after punishing Kageyama for alerting some "flies" of their motives. As Team Natsu find their way to Erigor, Erigor leaves and has his guild fight them in his place, while he prepares a Wind Wall to trap them in the train station. He has almost completed casting it when Erza Scarlet challenges him. Erigor quickly pushes her in the Wind Wall, trapping her inside before the fight can begin.

After resting for a while, Erigor heads towards the Guild Masters' location. However, he is stopped by Natsu who is being carried by Happy. As the two begin a battle of fire and wind, Erigor casts his Storm Mail spell which cancels all Fire Magic. After Happy taunts Natsu to give up, saying that they should leave defeating Erigor to Gray, Natsu goes into a mad rage and defeats Erigor because of his flames' power strengthening, as fire sucks oxygen away, neutralizing Erigor's Storm Mail Magic.

According to police reports, Erigor has escaped from prison unlike his other guild mates and hasn't been seen since.

Erigor reappears as an ally of Oración Seis and blocks Natsu and Gray's path after they defeat all the members of Naked Mummy. Erigor states that he has gotten more powerful and has been waiting to fight Natsu again. They proceed to fight, but he is defeated shortly afterwards, being knocked unconscious. His clothes are later stolen from him by the revived Jellal.

When the Infinity Clock is assembled, the Reborn Oración Seis are warped into the area, in front of the Fairy Tail members and the Legion Corps. Erigor, now calling himself Grim Reaper, appears along with Angel, Cobra, Midnight, Jackpot and Racer.

With his teammates, Grim Reaper raises his arm to implant the mark of the Oración Seis onto the Infinity Clock. Afterwards, an enraged Natsu uses his Fire Dragon Slayer Magic to attack them, but Grim Reaper easily repels it with his Wind Magic. He explains that the winds are not as gentle as they used to be, and speaks about how a storm is coming. Jackpot then reveals Grim Reaper's former identity to the Fairy Tail members, and after this Grim Reaper proceeds to fight off against Erza and Gray, easily defeating them. He regroups with his team and together, they leave the vicinity, after Angel uses her new Magic to defeat the others.

Some time later, he and his teammates discuss their goals concerning the Infinity Clock. Grim Reaper does not speak much other than to state the fact that a storm is coming, using it in relation to the topic. Much later, he and the rest of the Reborn Oración Seis wait near a church, which they destroy shortly afterwards. Soon after, many other churches fall to their attacks, increasing their notoriety around Fiore.

Later, in an unknown mountain pass, Wendy and Bickslow encounter Grim Reaper. Grim Reaper's lack of memory becomes evident as he doesn't remember being Erigor of Eisenwald. Wendy's attack is backfired by him, when he uses it to fly a herd of cows through the air. Bickslow pushes Wendy out of the way and is buried beneath the cows as Grim Reaper allows them to fall. Wendy begins healing an injured Bickslow despite his attempts to get her to leave. Even with the additional attacks coming directly from Erigor, she still refuses to budge. Wendy claims that she won't abandon her friend regardless of how bad the situation is, eventually healing most of Bickslow's wounds. At the same time, she unintentionally causes Erigor to experience memories of his past with Eisenwald, which starts to strain the Dark Mage. Wendy decides to heal him but Erigor tells her not to, using his Storm Magic against her. In turn, she uses a more healing-based Sky Dragon's Roar at him. Erigor winds up looking back at a younger version of himself and collapses to the ground, defeated. Bickslow confirms that an evil essence has fled from his soul and that Wendy was able to heal his heart.

Bickslow wakes Erigor up, who has regained his memories after Wendy healed him. Bickslow reminds Erigor of the fact that he was in prison and Erigor says that he had a hideous nightmare and after that he acted as Grim Reaper. Erigor says that he offered his memories in exchange for the Magic Power of mastery over weather phenomenon. He continues to say that forgetting everything was painful for him and it was the hardest thing he had ever been through, and for this he is grateful to Wendy for healing him. 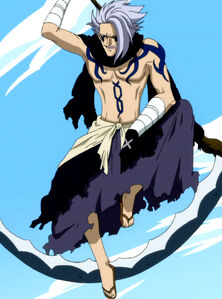 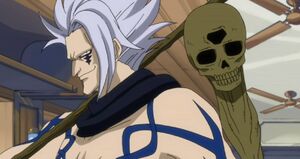 Erigor with the Lullaby Flute 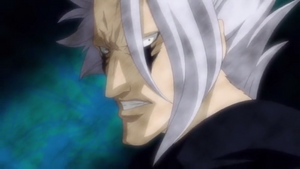 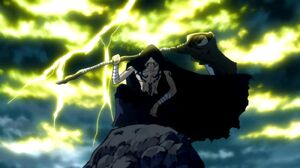 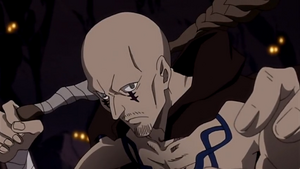 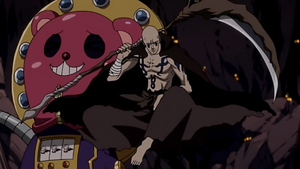