Overthrow T’Challa and become the King of Wakanda as revenge for his father's death (briefly succeeded).

Distribute vibranium weapons to all Wakandan spies all over the world so Wakanda can take power (failed).
Kill everyone who would oppose him (failed).
Kill Black Panther (failed).
Die a peaceful death (succeeded).

Erik "Killmonger" Stevens, (born as N’Jadaka) is the main antagonist of the 2018 superhero film Black Panther. He is an African-American black-ops operative turned opportunistic revolutionary putting on the Killmonger alias. As the son of N’Jobu and cousin of T'Challa, he planned to overthrow the Wakanda kingdom so he can sell the vibranium worldwide and avenge the death of his father. He is based on Killmonger from the original comics.

He was portrayed by Michael B. Jordan in his first villainous role.

A power-hungry individual obsessed with overthrowing the titular hero Black Panther; he is considered careless as he shown no care to even his allies, ultimately even betraying Ulysses Klaue at a destroyed junkyard, killing him and using his body and resources to get into Wakanda. He displays a great sense of sadism when he brutally kills Zuri just for the sake of the throne. At the end of the film, he is shown to be suicidal, preferring to die free than to live in chains.

N’Jadaka started off as the son of Prince N'Jobu, being raised in America. N'Jobu promised to N’Jadaka that he would visit their homeland Wakanda, claiming that the sunsets there were the most beautiful in the world. Needless to say, N’Jadaka was unaware that his father was conspiring a global revolution and is illegally selling vibranium to Ulysses Klaue. Eventually, T'Chaka (the King of Wakanda) learned about N'Jobu's intentions and forced himself to kill N'Jobu to save his closest friend Zuri. At the same time, N’Jadaka was playing basketball until he found his father's body, which left him in tears, just as T'Chaka and Zuri returned back to Wakanda. Feeling betrayed by his family, N’Jadaka angrily vowed to avenge his father's death and continue on with his plot.

Taking on the name Erik Stevens, he grew up to be a U.S. Navy Seal officer and black ops mercenary, and his incredibly high body count earned him the nick-name "Killmonger". Several days following the death of T'Chaka at the hands of Helmut Zemo, Erik is first seen visiting a museum of national weapons of offense and defense, observing several African artifacts. He joins in a conversation with a museum curator, who he confuses and disturbs by telling her that one of the artifacts is made out of vibranium, and that he will take it off her hands.

The curator threatens to call security, but Killmonger casually remarks how the guards are watching him every second, yet she isn't watching what she's drinking, and the curator falls down, having been poisoned. In the confusion, Klaw and his minions, disguised as paramedics, arrive and kill all the guards in the room while Killmonger's girlfriend Linda hacks the cameras to prevent any more security from arriving. Killmonger, Klaw and Linbani then escape the museum with the vibranium in an ambulance driven by Linda, Klaw planning to sell it to a buyer in an underground casino in Busan. However, Klaw is later captured and brought into a high security prison by the Wakandans and Agent Ross.

Despite the setback, Erik managed to formulate a plan to rescue Klaw from custody, which forced T'Challa to the scene, eventually learning about his true relation with Erik after noticing the Wakandan Royal Ring that Erik's using on a necklace chain. Erik manages to free Klaw, only to kill him, Linda and Linbani for a purpose to get into Wakanda. He uses Klaw’s body in order to sneak inside for the throne, with the help from T'Challa's treacherous best friend W'Kabi, who is disappointed over T'Challa's failed attempted to bring Klaw to justice (since Klaw was responsible for the death of W'Baki's parents). With the opportunity finally in his hand, Erik challenged T'Challa to a duel for the throne of Wakanda and won (as T'Challa was forced to strip his powers to make the duel fair). A triumphant Erik then proceeded to kill Zuri by impaling him with his own iron-spear staff before throwing a defeated T'Challa within the waterfalls of Wakanda to his seemingly demise.

With all of Wakanda finally under his fist, Erik proceeded to prepare shipments of Wakandan weapons to be distributed to operatives around the world to finish up what his father started. Fortunately, T'Challa was rescued by by the Jabari Tribe (led by M'Baku, who was indebted towards T'Challa for sparing his life), and healed with a powerful herb smuggled by Nakia in which she secretly obtained it before Erik furiously instructs the servants to burn it. As such, T'Challa and the Jabari Tribe conspired to overthrow Erik and stop the shipments. As the Dora Milaje and Jabari Tribe engaged into a battle against W'Kabi and his army, Killmonger dons his new battle suit to engage into a another battle against T'Challa inside Wakanda's vibranium mine. However, T'Challa defeats Erik by disrupting his battle suit using a sonic mining technology and fatally stabbing him just as W'Kabi and his remaining men are forced to surrender. Despite being mortally injured, Erik gains a genuine respect for T'Challa and calls the final blow one "Hell of a move." He laments that his father had always promised to show him how amazing the Wakandan country was, and T'Challa decides to honor his opponent's request.

Being transported to the breathtaking view of the capital during sunset, Erik comments on its beauty. T'Challa, feeling remorse for what Erik had become, says that they might still be able to heal him, but Erik chooses to die rather than getting cured and imprisoned in disgrace for his crimes, asking T'Challa to bury him at sea with his ancestors who jumped from ships, believing that "...Death was better than bondage." Erik looks at the sun one last time as he finishes himself off by pulling the spear out of his chest, sharing his final moments with his once-hated cousin before willingly succumbing to his injuries. T'Challa presumably honors his request to bury him at sea.

Michael B. Jordan's portrayal of Killmonger has been praised by audiences and critics alike. The main reason for the praise is how believable and even realistic Killmonger is in the movie, even more so when comparing him to other MCU villains. Chris Stuckmann has stated that "Beyond the fact that Michael B. Jordan gives a charismatic performance that's one of my favorite Marvel villains thus far and the best since Loki, the reason his villain is so good is because; just like all great movie villains, their appearance in the film is what causes the heroes to look within themselves and realize their weaknesses". 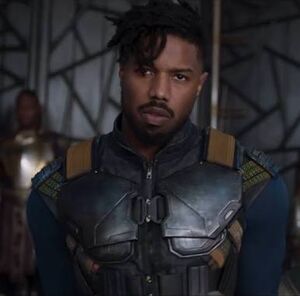 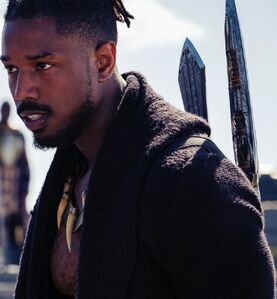 Retrieved from "https://villains.fandom.com/wiki/Erik_Killmonger_(Marvel_Cinematic_Universe)?oldid=2473811"
Community content is available under CC-BY-SA unless otherwise noted.