The Duke of Weselton's bodyguards

Protect the Duke of Weselton.

Erik and Francis are supporting antagonists in Disney's 53rd full-length animated feature film Frozen. They are a pair of bodyguards who are hired by the scheming Duke of Weselton to protect and serve him at all costs.

The guards first appear along with the Duke of Weselton entering Arendelle from the docks and nearing the castle gates. As they move towards them, the Duke expresses excitement as he greatly looks forward to unlocking its secrets and exploiting its riches. However, he accidentally says this out loud to his guards. At the coronation ball when Elsa accidentally reveals her winter powers, the Duke deems her magic dangerous, and orders his men to capture her the moment she flees, though he and his goons were nearly killed by an accidental blast caused by the queen, resulting in the Duke calling her out as a monster. Elsa escapes from the scene into the mountains, but accidentally casts a powerful curse over Arendelle, putting it into an eternal winter. Princess Anna departs to go after the queen, and leaves Prince Hans in charge. However, when her horse returns with the princess missing, Hans believes that the princess is in danger, and asks volunteers to journey to Queen Elsa's castle with him to find her. The Duke volunteers his bodyguards, and secretly orders them to eliminate Elsa should they find her so they could put an end to the winter.

Once the soldiers arrive at the castle, they are quickly met with opposition from Elsa's guard named Marshmallow. The guards try to shoot arrows through him, which causes no harm to the snow monster but annoys him into attacking head on with the group. As the monster fights, the Duke's thugs sneak past him and into Elsa's castle. Once inside, they spot the Snow Queen, who tries to escape from them to the second floor. Ignoring Hans' orders to bring no harm to Elsa, they attempt to kill the queen when they have her cornered. However, Elsa fights back when she uses her abilities to battle the two by holding one of the bodyguards back against the wall with ice spikes with a smaller one threatening to pierce the guard through the neck, and pushing the other guard with a block of ice against the balcony leaning towards the chasm below the castle. As Elsa is about to kill them, Hans intervenes and calms Elsa down. But as Elsa lowers her guard, the pinned guard attempts to shoot her with his crossbow, only for Hans to disrupt his aim and cause the arrow to shoot through the chandelier, causing it to fall to the ground and render Elsa unconscious. The guards were not seen after returning Elsa to Arendelle, likely suspended as punishment for disobeying Hans' commands. However, it turns out that Hans is planning to murder both Elsa and Anna to take over as King of Arendelle and that he had been using the Duke, Erik and Francis as pawns for his plot.

Eventually, Elsa finally removes the curse from Arendelle, and Hans ends up being deported back to his country to face punishment for his actions. Erik and Francis are last seen being escorted onto a ship along with the Duke as they are cut off from trade as punishment for their attempted murder of the Queen. It can be implied that Erik and Francis, along with the Duke, would be punished by the King of Weselton for their actions or possibly stripped of their positions. 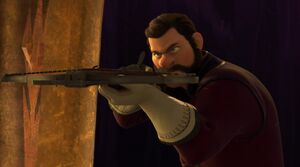 Erik aiming his crossbow at Elsa.

One of the bodyguards fighting Elsa in combat. 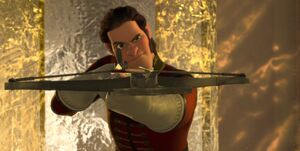 Aiming his crossbow, Francis is poised to kill Elsa.

Francis being restrained by the powers of Elsa.

Marshmallow, angered by the guards, bodyguards, and Hans' assault.

Erik aiming his crossbow at Elsa.

The Duke and his bodyguards, upon discovering Elsa's powers at the coronation.

The bodyguards aiming their crossbows at Marshmallow.

Elsa using her powers to restrain Francis as Erik looks upon.

Erik and Francis upon arriving at Elsa's Palace. 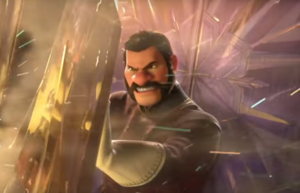 Erik attempting to stop the wall of ice from flattening him against the door.