The Witch of Truth

Erika Furudo, also known as The Witch of Truth, is a detective in Umineko no Naku Koro ni. She is the main antagonist in Episodes 5 and 6, End of the Golden Witch and Dawn of the Golden Witch, later anti-villainess in the series.

A blue-haired girl estimated by Genji to be about Jessica's age, she's highly intelligent and possesses a photographic memory.

She's quite polite in public and shows a deep interest in mysteries. In reality, she's quite ruthless and cunning and only solves mysteries, so she can sneer at those who pose them. She does, however, possess a serious inferiority complex, since she emotionally breaks down whenever things aren't in her favor.

She was voiced by Natsuko Kuwatani, who also voices Ryoko Asakura from the Haruhi Suzumiya series.

Fell from the pleasure boat Eternal Maid II mid-cruise in the waters near Rokkenjima.


The Ushiromiya family welcomed her as a guest.

She managed to drift to the island, unharmed, thanks to several miracles, including the life jacket she was wearing.

Erika has dark blue eyes and hair. Though estimated to be about Jessica's age, her body's under-developed, like that of a middle-school girl. The pink dress she wears is one that actually belongs to Jessica.

In the Meta-World, Bernkastel told Battler that Erika was created in her image, which accounts for their striking resemblance.

Erika's confidence in her abilities leads her to, often, underestimate her opponents. She also demonstrates a rather vindictive side to her character during End of the Golden Witch when she informs Battler why she wanted to solve the epitaph in the first place; to, not only sneer at whoever proposed the epitaph's riddle, but to see the angry and pitiful expression Jessica would likely don upon realizing that Battler stole the headship from her father as well, since Jessica interrupted her, while she was solving the epitaph. Her hatred of Battler, similarly, stems from losing to him later on. In spite of serving Bernkastel, she denies magic, as well as love, though the events of Dawn of the Golden Witch would suggest that her denial of love stems from a past lover's infidelity.

Coincidentally drifting ashore during the family conference of 1986, she is able to break through the limits imposed on the first four games and become the island's 18th person. She claims to be a detective and manages to solve the epitaph with her excellent reasoning skills, along with the help of Battler. Erika is rather insensitive and only cares about solving mysteries, so she can prove her superiority to their creator upon solving them. After the events of the first twilight, she makes use of her rights as the game's detective to lead a full-blown investigation, which eventually pins Natsuhi as the culprit. By tackling Fantasy with Mystery, instead of Anti-Fantasy, Erika manages to completely deny the existence of Beatrice and end the game. As a result, Beatrice is killed, much to Battler's dismay. Bernkastel rewards her by making her the Witch of Truth and Game Master, but the latter of the titles is soon stolen from her by Battler, who has become the Endless Sorcerer. Battler destroys her theory, forcing her to create a new one. Since there are now two possible truths to the game, it ends as a tie. A vengeful Erika swears to expose the truth and kill Battler in the sixth game.

Dawn of the Golden Witch

Erika had been presumed to be lost at sea after falling from a boat near Rokkenjima around the time of the murders. By the time public interest about Erika's fate rose, she was written into the stories of End of the Golden Witch and Dawn of the Golden Witch as having washed up onto the shores of Rokkenjima, where she was taken in by the Ushiromiya family as a guest. From a magical perspective, Erika was a piece added to the game board by Bernkastel, created in her own likeness, to serve as the game's detective and investigate the murders presented in the core arcs, interacting with characters from the Meta-World to form her theories.

Twilight of the Golden Witch

Erika is pulled from Oblivion and makes her first appearance in the game when she saves Ange Ushiromiya from harm in Bernkastel's game between her and Battler. She later reappears at Bernkastel's bidding, as she arrives at the Golden Land with Goats to make a deal with Beatrice: surrender the game board over to The Library, or be executed. Erika is fooled into believing that the relatives are arguing, while they are, actually, stalling her as Battler and Lambdadelta search The Library for the key. Erika eventually figures this out, due to an error made by Gohda, and engages in a brawl with the residents there. She eventually retreats, much to her own anger and embarrassment.

She later came back to the Golden Land to continue the battle. She engaged Krauss in battle, where she suffered an uppercut from him. She was almost shot by Rosa, Rudolf and Kyrie. She also fought against her former friend Dlanor. She then fought against Beatrice where they engaged in a swordfight in her ship. She won and took Beatrice's heart to Bernkastel afterwards. In the 'trick' ending, she appears before Ange on the ship to Rokkenjima and applauds her for her own detective work. If the player chose the 'magic' ending, she and Battler had a small chat on how Ange was able to become a better witch than her, even though they are both similar in many ways in regards to how they both know the truth. Battler later tells her that she is not a witch but a detective, to which they finally bid farewell to one another afterwards.

In the final Tea Party, she came to the room where Bernkastel and Lambdadelta were, much to her chagrin. She came to deliver letters on how Willard, Lion, Gertrude, Cornelia and Dlanor were doing. It is revealed that she is still in contact with Dlanor despite their fight earlier. It can be assumed that both of them have made up and renewed their friendship. 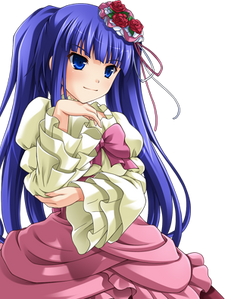 Retrieved from "https://villains.fandom.com/wiki/Erika_Furudo?oldid=3545471"
Community content is available under CC-BY-SA unless otherwise noted.