Studying to be an astronaut.

Erin Suda, also known as the Aquarius Zodiarts, is one of the Horoscopes and an antagonist in Kamen Rider Fourze.

She was portrayed by Karen Takizawa.

Erin Suda was transferred to AGHS from an American school to pursue her dreams of becoming an astronaut like her father. Her father was never able to go into space because someone who had less skill but was more charismatic was selected instead. Thus Erin desired to be the first person in her family to go to space.

Erin accepts the Aquarius Switch because of the advantages a Zodiarts body will give her in space later on in her career. Because her Japanese was poor, her identity as the Aquarius Zodiarts is quickly uncovered. Gentaro then makes a deal with her that if Yuki aces the Astronaut Selection Exams, Erin will him her Zodiarts Switch.

However, everything went wrong after the second exam, in which they divided into two teams were tasked with building a robot from a provided kit. The team ended up choosing Yuki's design over Erin's. After going back to the testing room and finding a missing piece, Erin believed that Yuki hid the piece on purpose in order to win.

During the third exam, Erin transformed into the Aquarius Zodiarts and attacked Yuki, causing her to sprain her ankle. Gentaro then appeared to stop her and explained to Erin that Yuki hid the piece because she was told to, as each box had a note,instructing the reader to hide a piece in order to test how their team dealt with the unexpected. Realizing her assumptions were wrong, Erin healed Yuki's ankle and apologized to her for her jumping to conclusions, saying that if she won she wanted to win fairly.

After the exam, Erin rejected Gentaro's offer of friendship out of loyalty to Gamou. Gentaro respecting her decision and challenged her to battle. During the fight, Fourze destroyed Aquarius' healing jars with a Claw Switch-powered Barizun Sword before defeating her with the Rider Super Galaxy Finish. The Virgo Zodiarts then used her powers of illusion to sneak Erin away. Virgo took her Horoscopes Switch for and had her memories erased. She later met Gentaro and Yuki at the JAXA building where they originally met and happily accepted their offer of friendship. 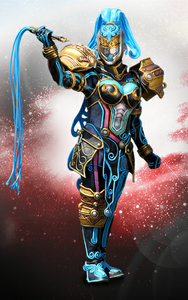 Aquarius Zodiarts
Add a photo to this gallery

Retrieved from "https://villains.fandom.com/wiki/Erin_Suda?oldid=3536131"
Community content is available under CC-BY-SA unless otherwise noted.